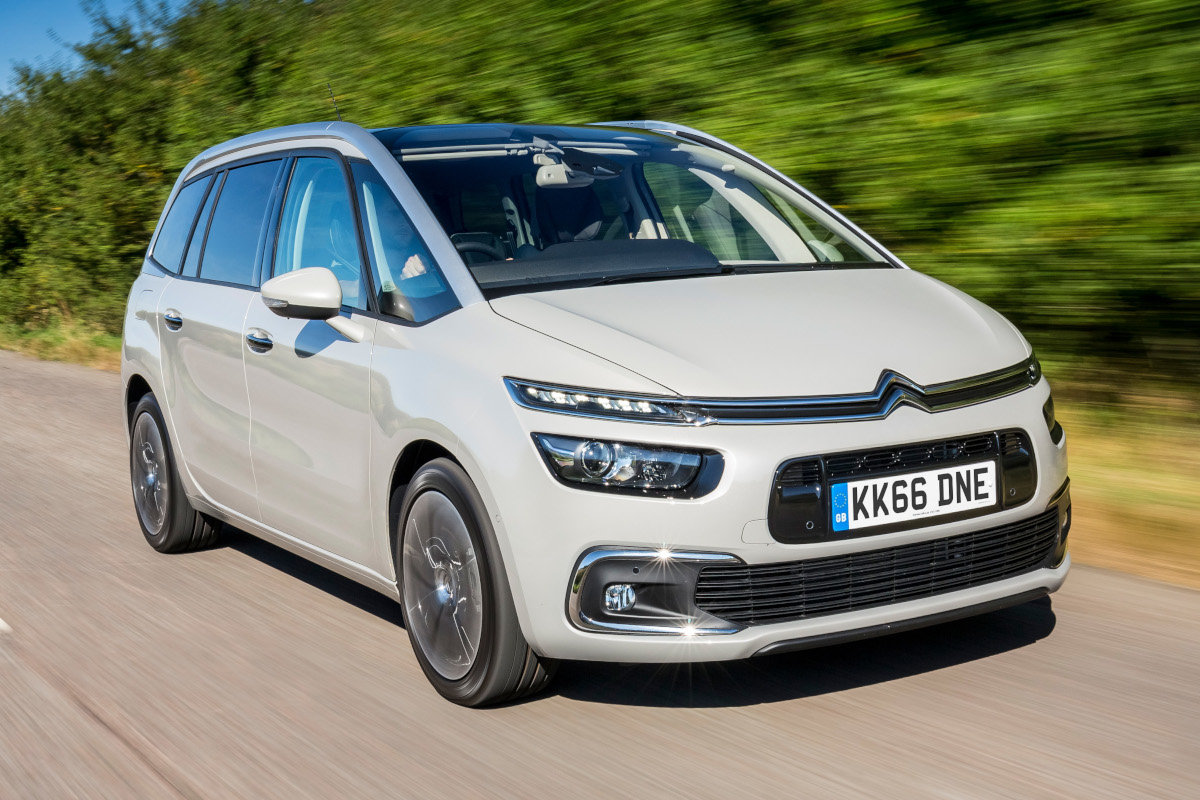 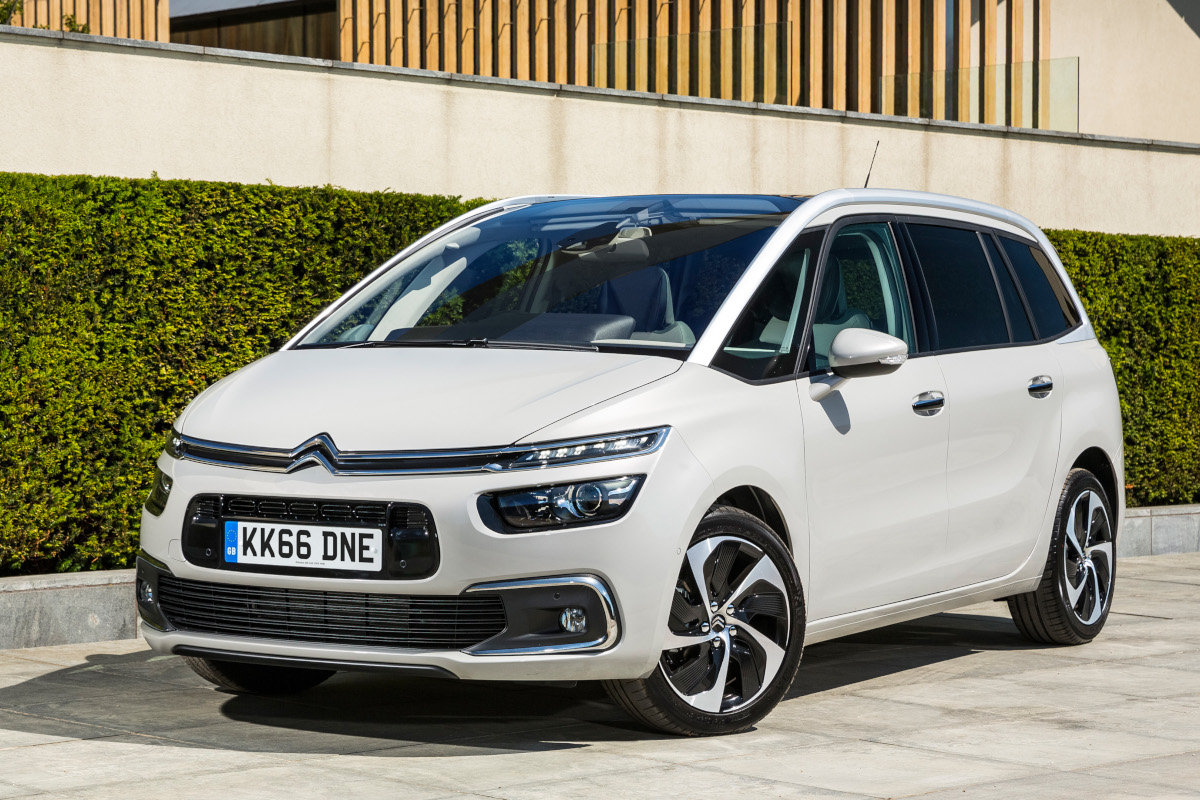 The Citroen C4 Picasso is a five-seat people carrier with futuristic styling that combines technology, safety, and practicality in a very appealing package to families. There are petrol and diesel alternatives, and the latter have overwhelmingly found favour with frugal owners due to their low running costs 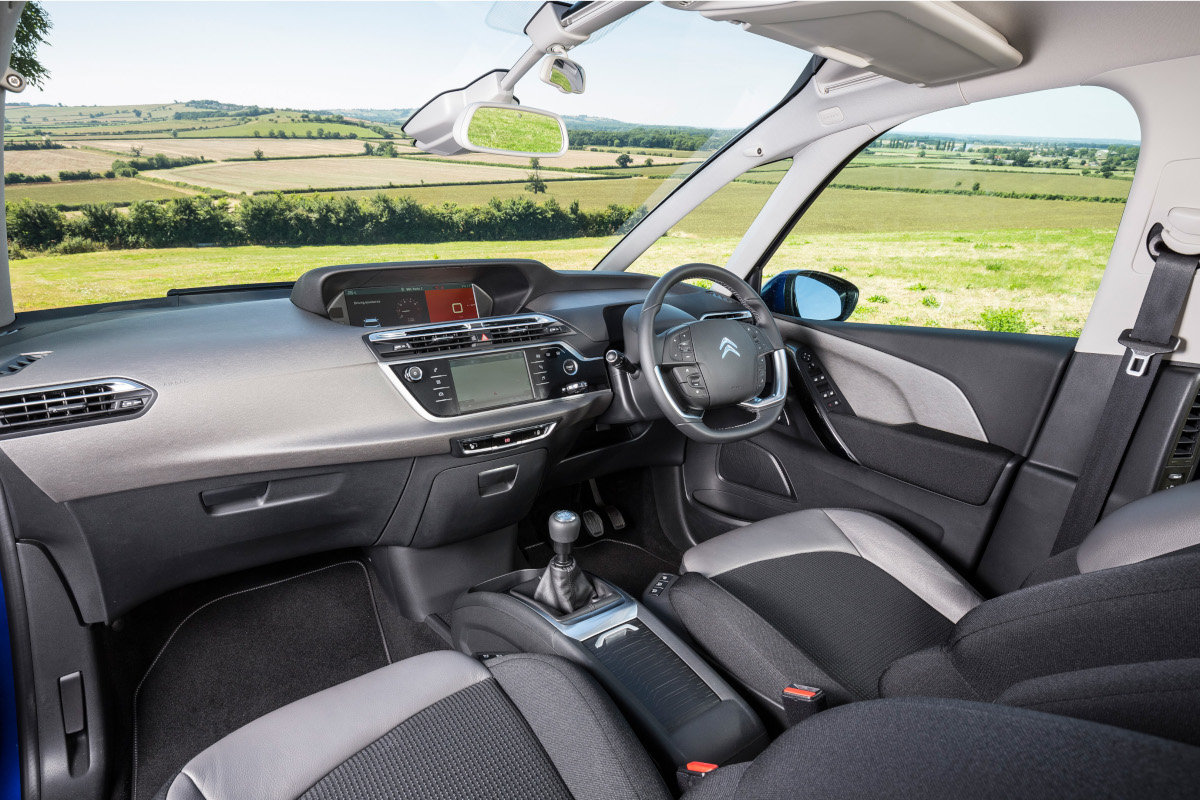 What is the Citroen Grand C4 Picasso?

MPVs, or people carriers, were a popular family car option before SUVs stole the show. Their practicality – especially seven seaters – was a real boon to parents with kids and kit to carry, but they were often seen as a bit dowdy and the very nadir of driving as an enjoyable activity. Some of that was justified, but car manufacturers responded by turning up the design wick and offering consumers rather stylish MPVs.

A case in point is the Citroen C4 Picasso. OK, so it might not be quite worthy of its artist namesake, but it certainly has kerbside appeal. From its LED daytime running lights at the front, linked by a chrome strip incorporating the Citroen chevrons, through its well-proportioned side profile, to its almost handsome hatchback at the rear, the C4 Picasso is a car that refutes the idea that MPVs must look dull. The interior continues the theme; it’s airy and spacious feel, complemented by a clean, unfussy dashboard.

There’s no shortage of space in the five-seater model’s cabin, especially in the back, where there are three seats of equal size, as opposed the usual smaller middle seat. They all move forward and backwards independently, too, which is neat. Headroom and legroom in the rear are plentiful, too, so adults can sit in comfort.

There’s a 537-litre boot, which expands to 630 litres when the rear seats slide all the way forward and, when folding the rear seats flat (and they do go completely flat), it increases to 1,851 litres. The Volkswagen Touran is the only direct rival with a bigger boot, at 695/1,857 litres.

It can’t quite match the Ford C-Max or the Renault Scenic, but the C4 Picasso handles decently. There’s plenty of grip and the steering is accurate, but the body roll is noticeable during corners – but that compromise is in the pursuit of better ride quality. Citroen knows a thing or two about building comfortable cars, and the C4 Picasso does nothing to damage that reputation. Bumps and broken surfaces are absorbed really well, which is always a major plus when you’re carrying family around.

None of the engines offer massive performance – the 0-62mph times of all the variants hover around the 10-second mark – but the diesels are generally quiet, and they only sound gruff under hard acceleration. The C4 Picasso’s soundproofing also performs well, with little wind- or road noise intruding into the cabin, even at motorway speeds, which reinforces the car’s relaxed nature.

Top-of-the-range Exclusive+ adds a series of electronic driver aids, 18-inch alloys, an electric tailgate and front parking sensors. In a 2016 facelift, the trims changed to Touch, Feel and Flair. In a nutshell, Touch replaced VTR+, Feel took over from Exclusive (but with front parking sensors and a better infotainment system), while Flair is much like the previous Exclusive+ but with a full-length glass roof. 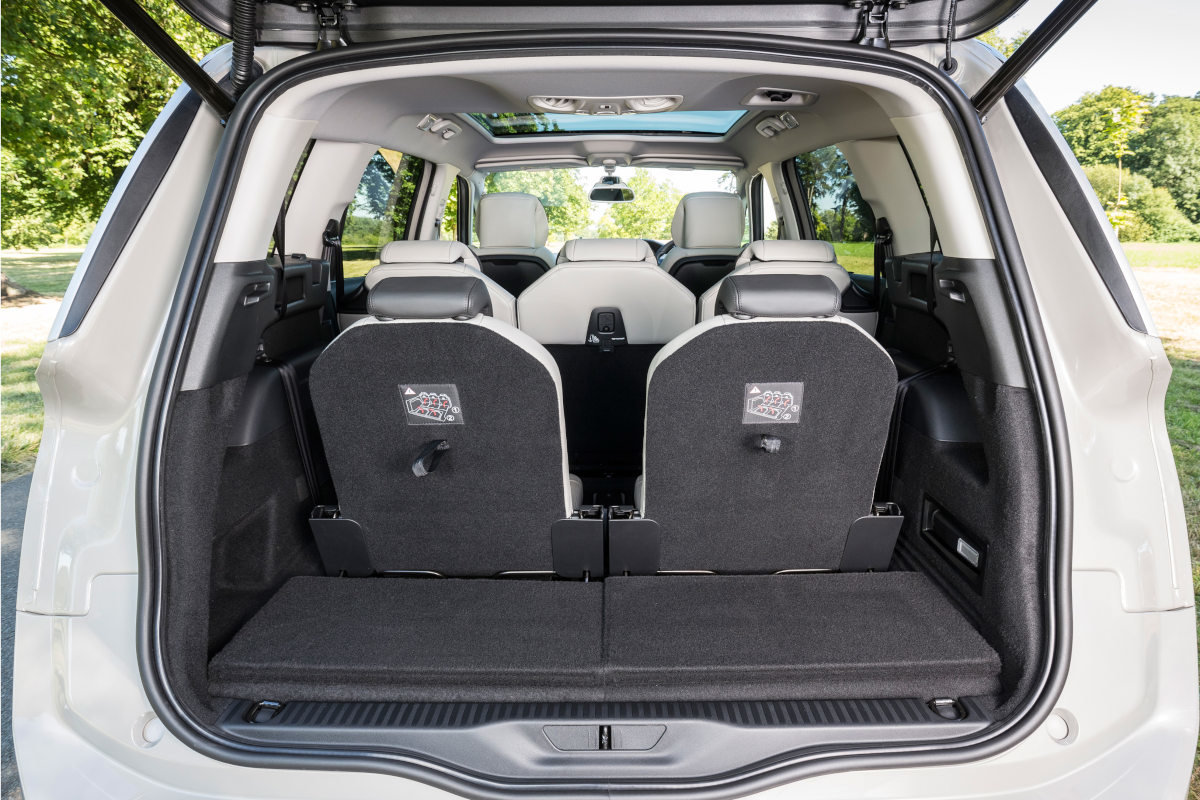 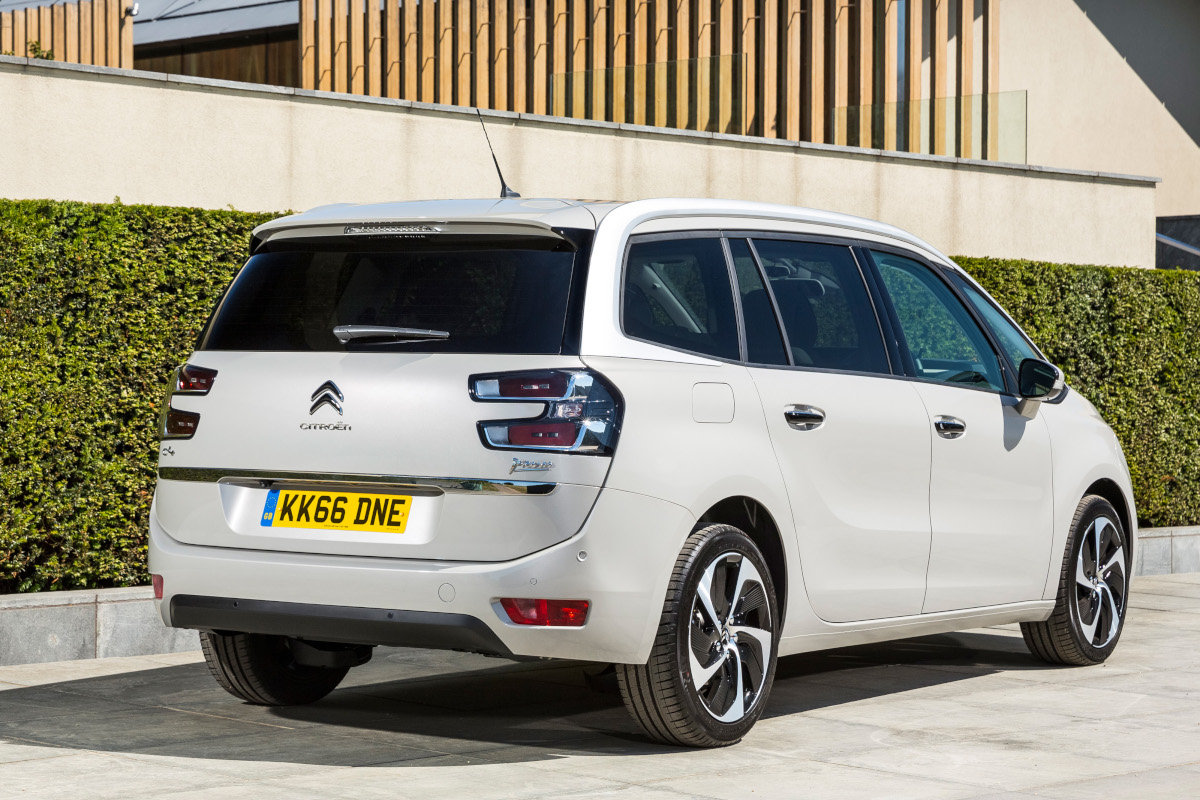 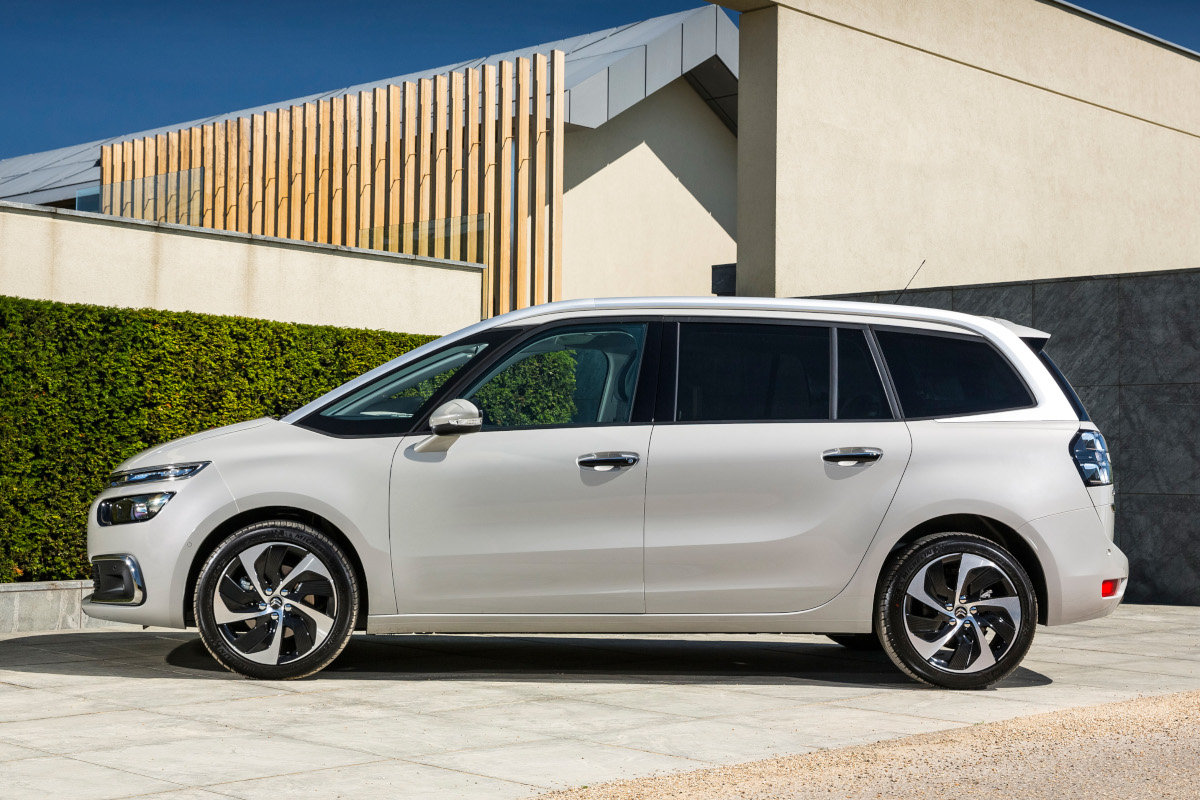 Around 90% of all Citroen C4 Picassos were sold will with a diesel engine, so fuel economy is clearly, and understandably, a priority for most owners.

Most of the diesels are variants of the 1.6-litre HDi engine, which was tweaked and updated during the C4 Picasso’s time on sale. At the the initial launch, there was an 89bhp variant called HDi 90, and the e-HDi 90 was mated to Citroen’s six-speed automatic gearbox; both versions returned 74.3 mpg (although that was under the old NEDC test, so in the real world something like 60-65mpg is more likely). This engine was later tweaked to provide another 10bhp and became the BlueHDi 100; official fuel economy remaining the same.

The Blue HDi 120 adds a little more power, but the economy figure is the same, so it’s probably the sweet spot in the engine range. With a more power still, the 2.0-litre BlueHDi 150 (later called the BlueHDi 160) is a little less economical, but 70.6mpg (probably 55-60mpg in the real world) is still impressive.

A couple of petrol engines are also worth considering for those who do most of their driving in town, especially the 1.2 PureTech recommended above. An official 55.4mpg is pretty good, even if it’s more likely to be 40-45mpg. The THP 165 engine, which was retired from the range in 2016, claims fuel economy of 50.4mpg.

Vehicle Excise Duty (car tax) was based on emissions until April 2017, so the amount of CO2 the different versions of the C4 Picasso emit are important depending on when the car you're looking at was registered. The 1.6 diesels mostly emit less than 100g/km, so if the car was registered before that date, then you would pay nothing at the time of writing. The BlueHDi 150/160 and the 1.2 PureTech attract double-digit annual bills and the THP 165 makes it to three figures but not by much.

C4 Picassos registered after April do incur road tax, but still not much given the size of the car and, at the time of writing, it was a flat annual sum of £150 for all variants, regardless of engine.

Insurance groups are low, starting at 14 and going up to 25 out of 50, so most family drivers should have reasonable annual premiums.

Citroen is known for affordable service and maintenance costs, and it offers a series of fixed-price service plans for cars of varying ages to help spread the cost. 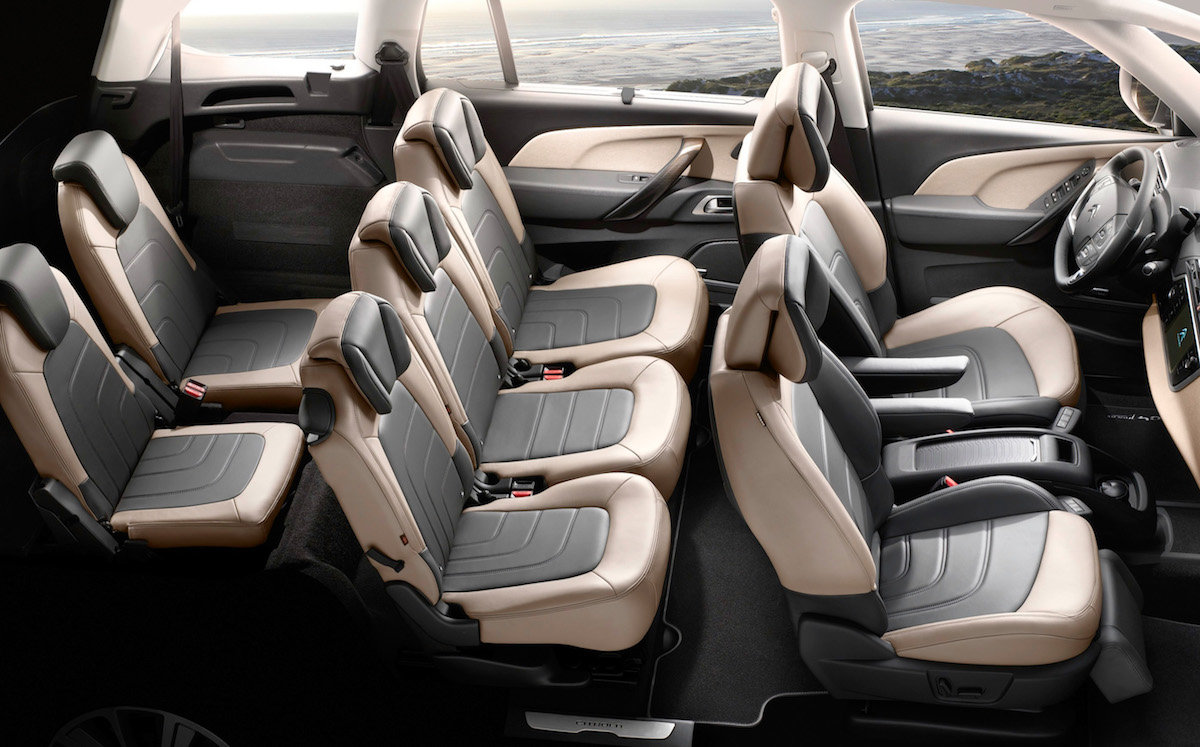 The one area in which Citroen often falls down is reliability. The company has improved over the years in which the C4 Picasso was on sale, but its results in customer satisfaction surveys, have been mixed.

The C4 Picasso doesn’t make many appearances in reliability surveys, but its seven-seat sibling, the Citroen Grand C4 Picasso, does – and it doesn’t tend to fare well. One survey reported that 22% of cars suffered a fault, with electrical issues among the most common problems, along with suspension glitches. Other issues included those to do with the battery, the bodywork, and the engine. The good news is that most cars were repaired in less than a week, and 90% of repairs were free. However, some owners reported having to spend more than £1,500 to rectify problems.

The Citroen C4 Picasso had a three-year/60,000-mile warranty from new, though, which is the same cover available with its Ford C-Max and Volkswagen Touran rivals. That is bettered by the Kia Carens, which has a seven-year warranty. These days, Citroen gives you the option of a five-year/100,000-mile warranty with a new car, but only if you buy it online.

The C4 Picasso is a very able car, and it could be considered a class leader in many ways. It is certainly one of the best looking MPVs on the market and, when you step inside, it continues to impress with the quality of the materials and the way in which the cabin and the controls are laid out.

It’s spacious and feels really airy – especially if you bag a car with the full-length sunroof – and makes for brilliant family transport. It’s a very comfortable way to travel, and there’s the extra practicality of lots of useful storage spaces and a highly flexible seating layout. It’s also very safe, especially if you have one of the higher trim levels, which have more safety equipment fitted as standard.

The only caveats are that it isn’t as much fun to drive as the Ford C-Max and, the biggest, that it isn’t the most reliable model in its class; the Toyota Verso and the Kia Carens are better bets in this department. That said, the C4 Picasso probably offers the best all-round package in the five-seat MPV sector.