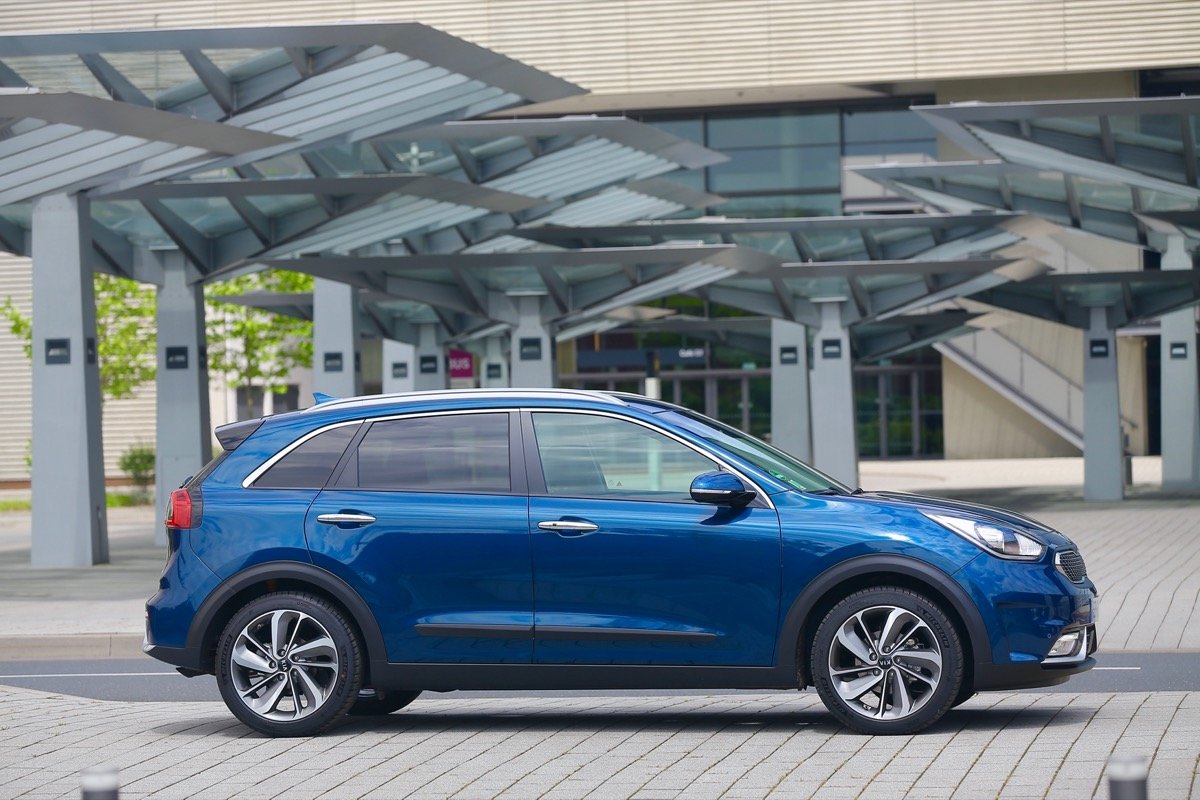 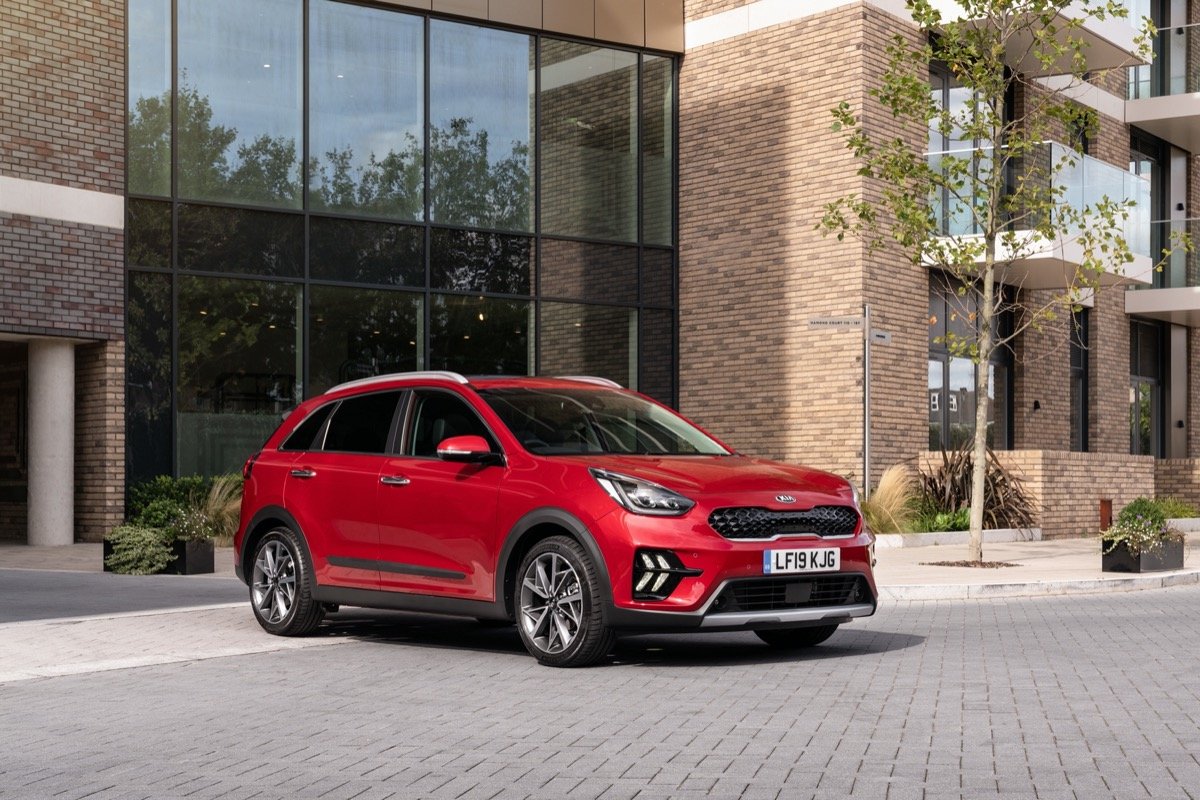 The Kia Niro is a small SUV competing in a very crowded marketplace with some very established competition. So what does it bring to the marketplace? Electrification, and lots of it. There’s no straight petrol or diesel version of the Niro, but there are hybrid, plug-in hybrid and full-electric models. Whatever the powertrain, they all come with a massive warranty. 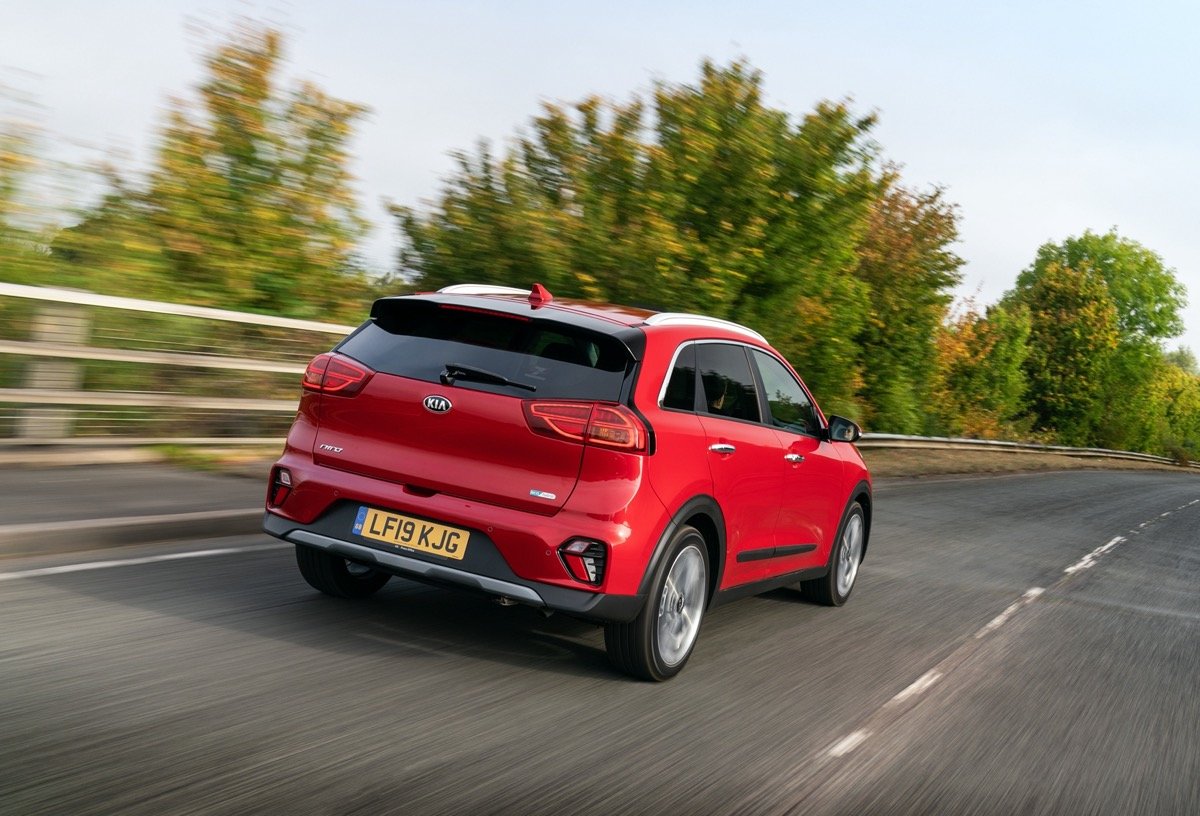 It’s not unusual for a company to launch a small crossover SUV these days – virtually every manufacturer has one – but in 2016 it was very unusual for a car company to reveal a new small SUV with no conventional petrol or diesel engine options. When Kia unveiled the Niro hybrid SUV, it was very clear that all versions would be electrified, and so it’s proved. A plug-in hybrid and a full-electric model followed suit.

They all compete in a packed marketplace. Small SUVs have rocketed in popularity, and if you’re going to take on the likes of the Nissan Qashqai, Skoda Karoq and Ford Kuga, let alone other hybrids like the Hyundai Kona, Toyota C-HR and Peugeot 3008, you’d better have something good.

The exterior looks are subjective – and you'll make up your own mind about them – but it's safe to describe the interior styling as safe and conservative. Build quality is good, even if the materials used don’t feel all that special. Compared to the very chic Peugeot 3008, it’s all a bit underwhelming, but you’re unlikely to dislike it.

All models get an infotainment system that isn’t particularly snazzy to look at, but is very straightforward to use, and we’d take that over some of the flashy-but-fiddly systems on rival cars. Apple CarPlay, Android Auto, DAB radio and Bluetooth are all standard. Lower-end versions get an eight-inch screen while higher-spec models have a 10.25-inch unit that also includes satnav.

From a practicality point of view, space inside is reasonable, and four adults should have no problems fitting in, although the middle rear seat is on the tight side. Headroom is a little less generous in models with a panoramic sunroof, but not majorly so. Boot space is on the small side, though, largely because the battery needed for electrification takes up room under the floor, particularly in the hybrid. Still, you can fold the rear seats down pretty much flat if you need to transport larger items around. If you want more space from a Kia SUV, check out the Sportage model.

The first Niro released was a ‘self-charging’ hybrid, which is to say not a plug-in model. This puts it up against not only other SUVs, but other hybrids, such as the Toyota Prius hatchback. The Niro can run solely on electric power only for a short period, with most of the power in the battery provided by the 1.6-litre petrol engine. Together, both power sources made 139bhp. Like all Niro models, it's front-wheel drive and uses a six-speed dual-clutch automatic gearbox, rather than the CVT transmission that many hybrid rivals employ.

In 2017, a plug-in hybrid (PHEV) model followed, with a battery that you could charge by plugging it into a wall socket or dedicated charger to give you up to 30 miles on pure electric power. This electric range means it has the potential to get much better fuel economy, but only if you have somewhere to charge it, and rely mainly on the electric motor. If the battery starts to run out of charge, you’re back to using a relatively fuel-hungry petrol engine, so it’s best suited for around-town journeys.

Performance in both hybrids is perfectly adequate around town, although they’re both heavy cars and aren’t particularly nippy in their acceleration if you want to overtake or get up to speed on a motorway. That weight also affects handling, especially in the heavier plug-in model, which can lean over more than you’d like while cornering. You have to drive it quite conservatively, although the light steering, which doesn't deliver much feedback, doesn’t encourage you to do anything else anyway. If you’re looking for any kind of fun behind the wheel of your midsize, you’d be better off with a Seat Ateca. Still, both versions of the Niro are comfortable enough.

A zero-emission electric version, called the e-Niro, was introduced in 2018, but we’ll cover that in a separate review. 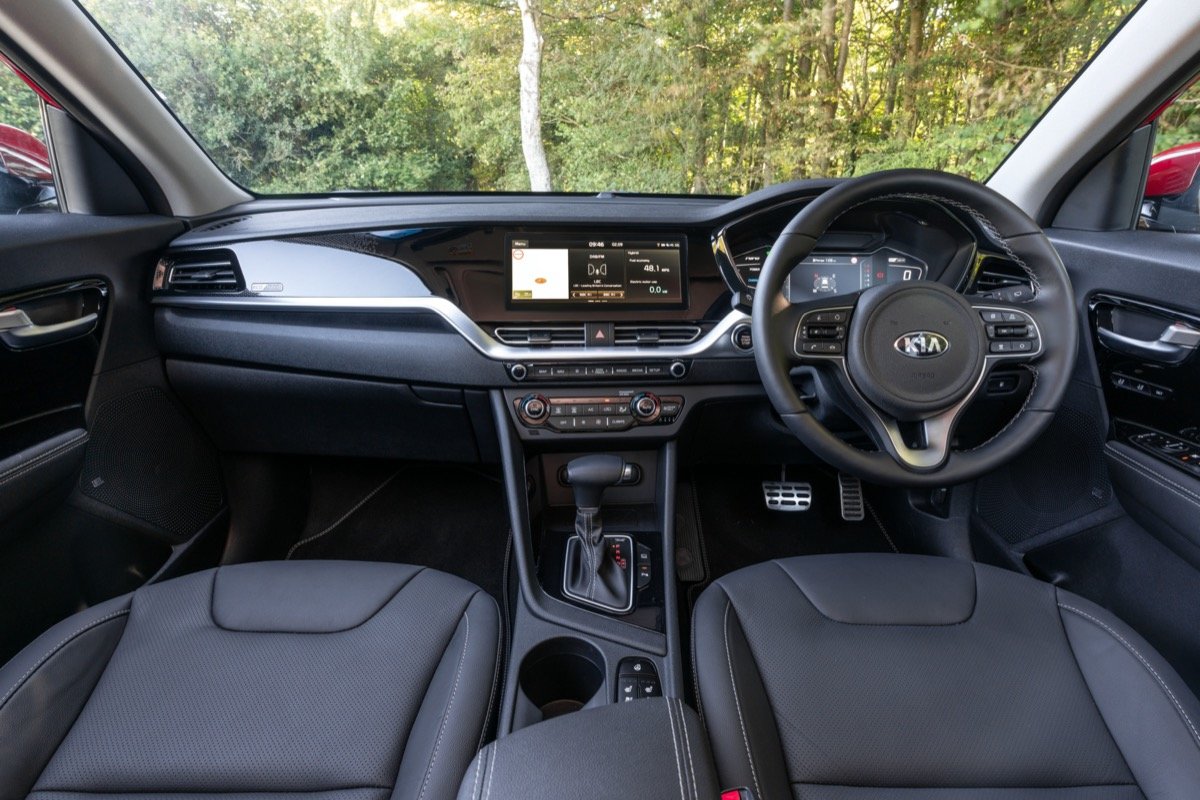 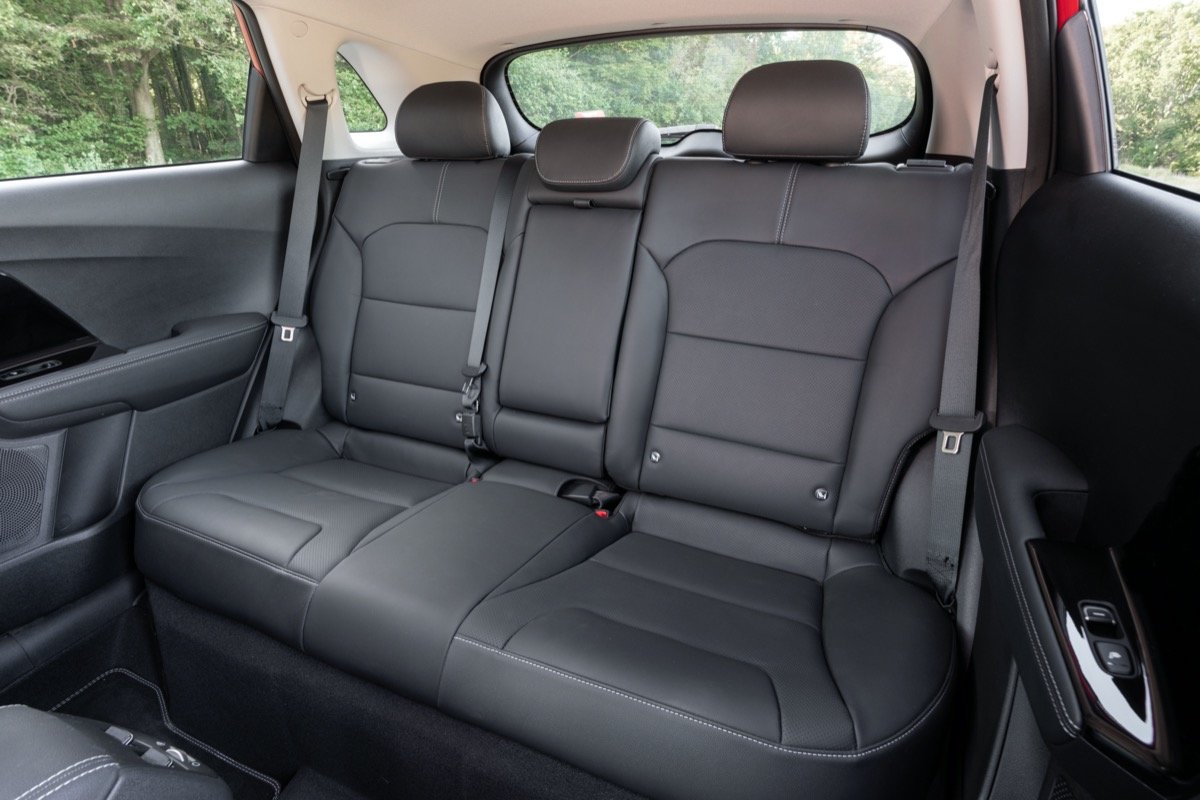 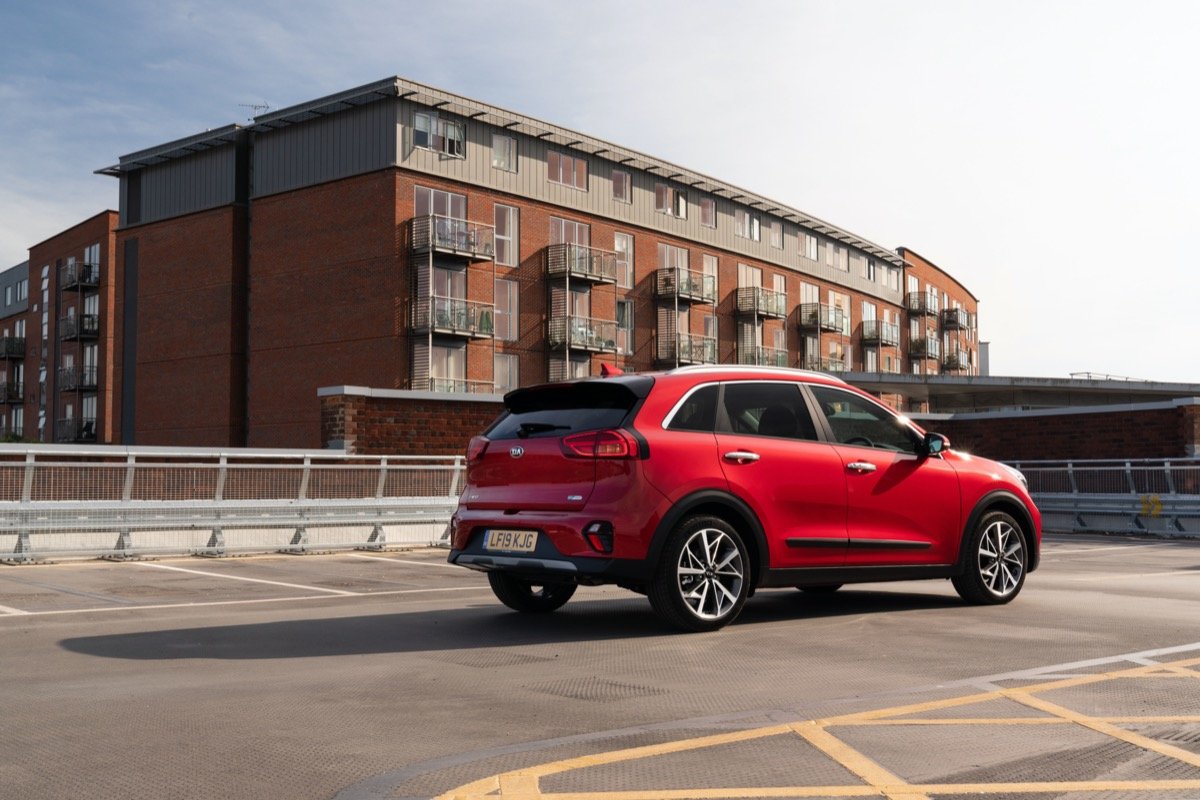 Running costs will be cheapest on the all-electric e-Niro, but below that, on paper at least, the PHEV is the one to go for to reduce everyday outgoings. We’ll repeat the caveat that you’ll need to keep it charged and do mostly shorter journeys to get the best out of it. The official fuel economy is up to 201.8mpg, but what you actually get will vary dramatically depending on how you use it.

Of the Kia Niro hybrids, there will be tiny variations in official fuel economies depending on model, but the official MPG figure is up to 58.9mpg on the 2 model.

When it comes to Vehicle Excise Duty, models registered after 1 April 2017 will pay a flat rate of £140 a year. If the car was registered before that – and only the regular hybrids would have been – then you’ll pay less; nothing for 1 and 2 models, and £10 a year for 3 and First Edition models.

Insurance groups vary between 11 and 15 (of 50), which means premiums should stay pretty low. The PHEV models tend to be a bit more expensive, but there’s not much in it.

Servicing is required every year or 10,000 miles, which isn’t the longest of intervals, but Kia prices tend to be pretty reasonable. Kia also offers fixed-price service plans that will cover several services in the future and keep you from any inflation-based cost increases. Prices depend on the age of the vehicle, but start at £359 for two services, at the time of writing. Consumables, such as tyres, shouldn’t be too expensive; prices start at around £55 per tyre for a reputable brand. 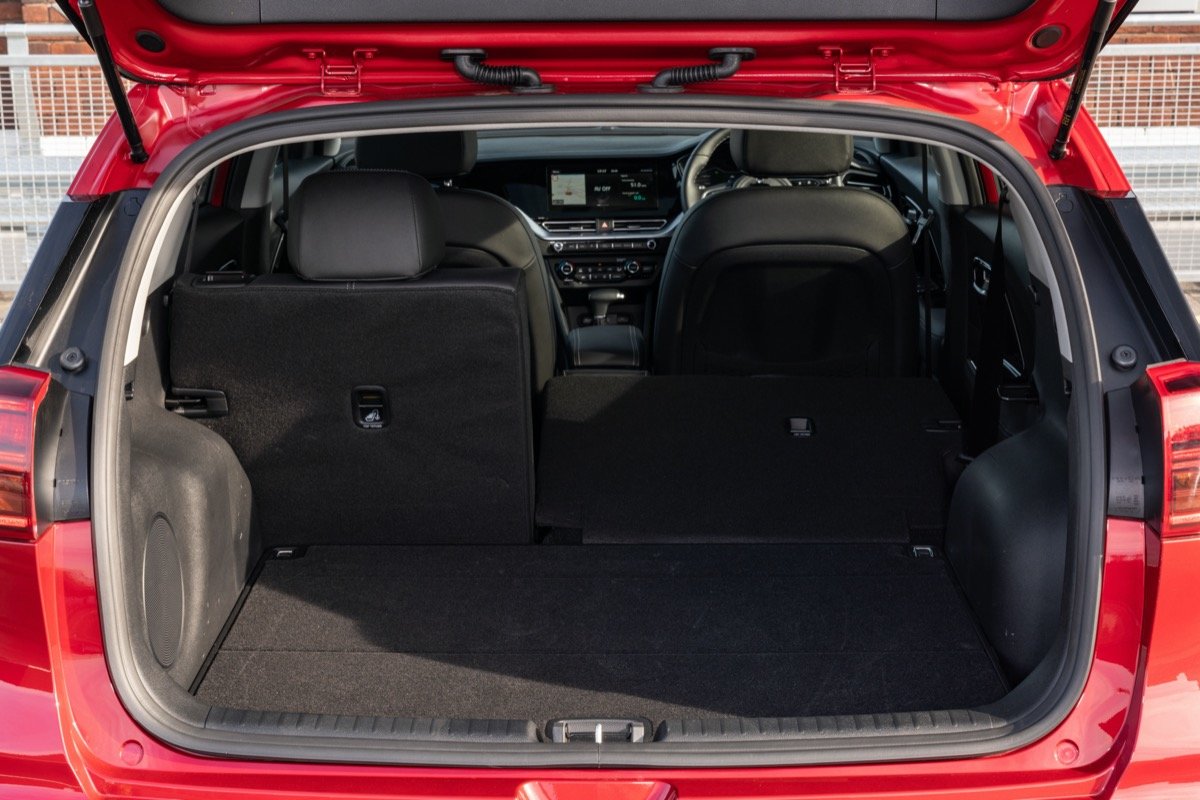 Kia has a very decent reputation for reliability, backed up by results in independent studies. The brand came seventh of all major manufactures in the 2019 JD Power UK Vehicle Dependability Study, and seventh again in the 2020 What Car? Reliability Survey.

The Niro specifically has a slightly less stellar - but still very good - record. It came second of 75 cars in the 2018 Driver Power owner survey, and fourth in 2020, but only ninth in the 2019 What Car? Reliability Survey of hybrid and electric cars.

Kia excels when it comes to new car warranties, and the Niro comes with a seven-year, 100,000-mile warranty, which is better than any rival.

Issues to watch out for include a stutter or jerk on PHEVs when moving away from standstill. Most of these issues seem to affect North American owners, although we have seen a few UK owners report the same issue, with no obvious fix. As with any used car, make sure you conduct a thorough test drive, ideally starting with a cold engine.

There have been a couple of recalls issued in the Niro. One was to fix an issue of heat build up in a power relay assembly, while the other was to fix burrs in the clutch actuator housing, which could damage the oil seal. Any affected cars should have been fixed by now, but it’s worth checking with any Kia dealer to see if the car you’re looking at was affected. 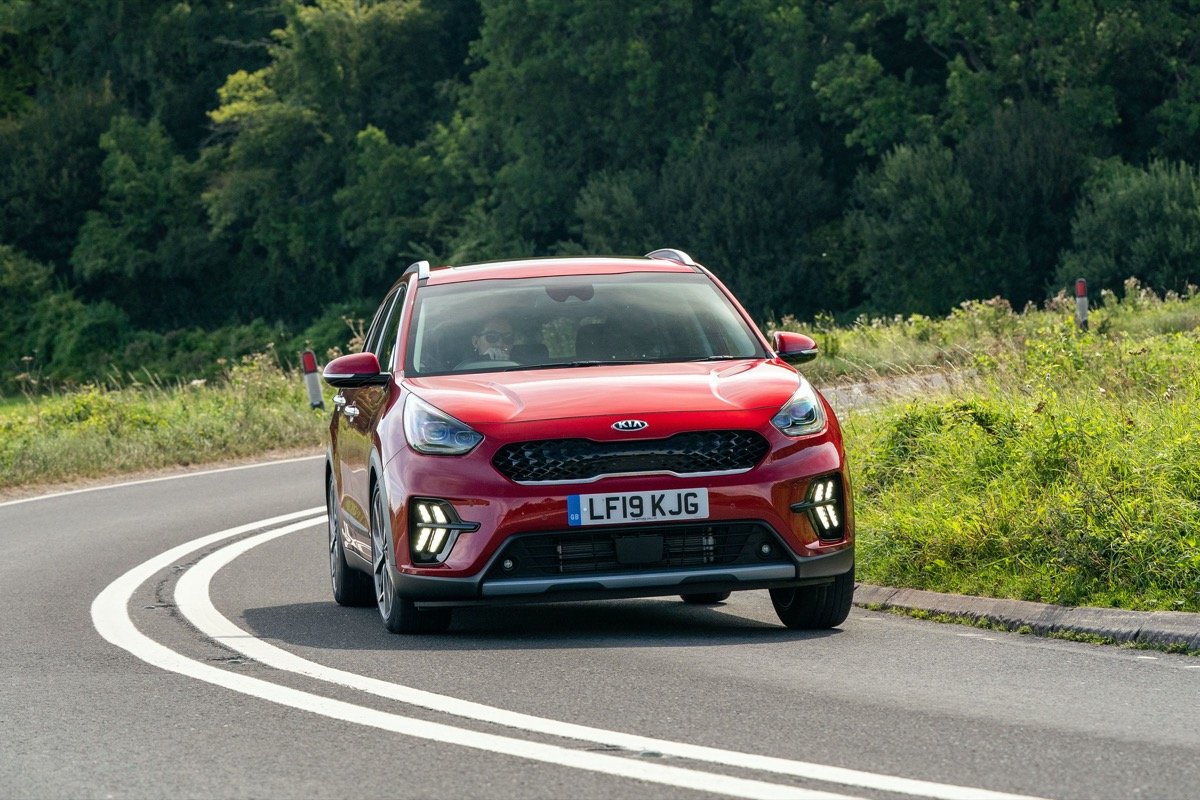 As an electric car, the e-Niro is really one to consider, but the hybrid versions are less spectacular. They’re not particularly bad in themselves, but they’re competing with a lot of rival cars that are better to drive, more spacious, more stylish and more comfortable. If you’re after a PHEV then the Niro’s neat trick of acting like a normal hybrid when you’re low on charge could be enough to convince you, and we doubt any owners will end up grumbling at the Niro experience. There are better options on the market for most tastes and requirements, but many will be tempted by the Niro’s excellent reputation for reliability and its fantastic seven-year warranty.

Search for a Kia Niro for sale on CarGurus.

Phillip Boring and the mpg is not as claimed.

Phillip Overall the car is stylish and performs well. Build quality is good but expensive for what it is.