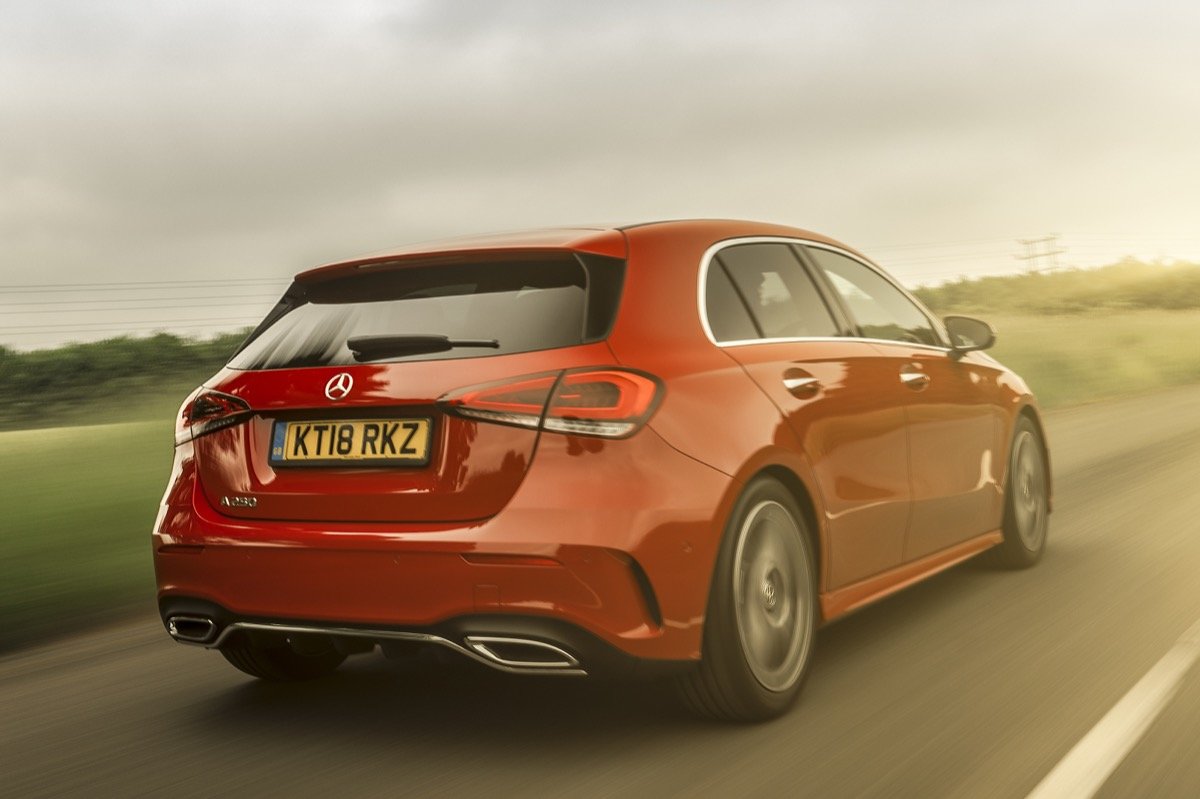 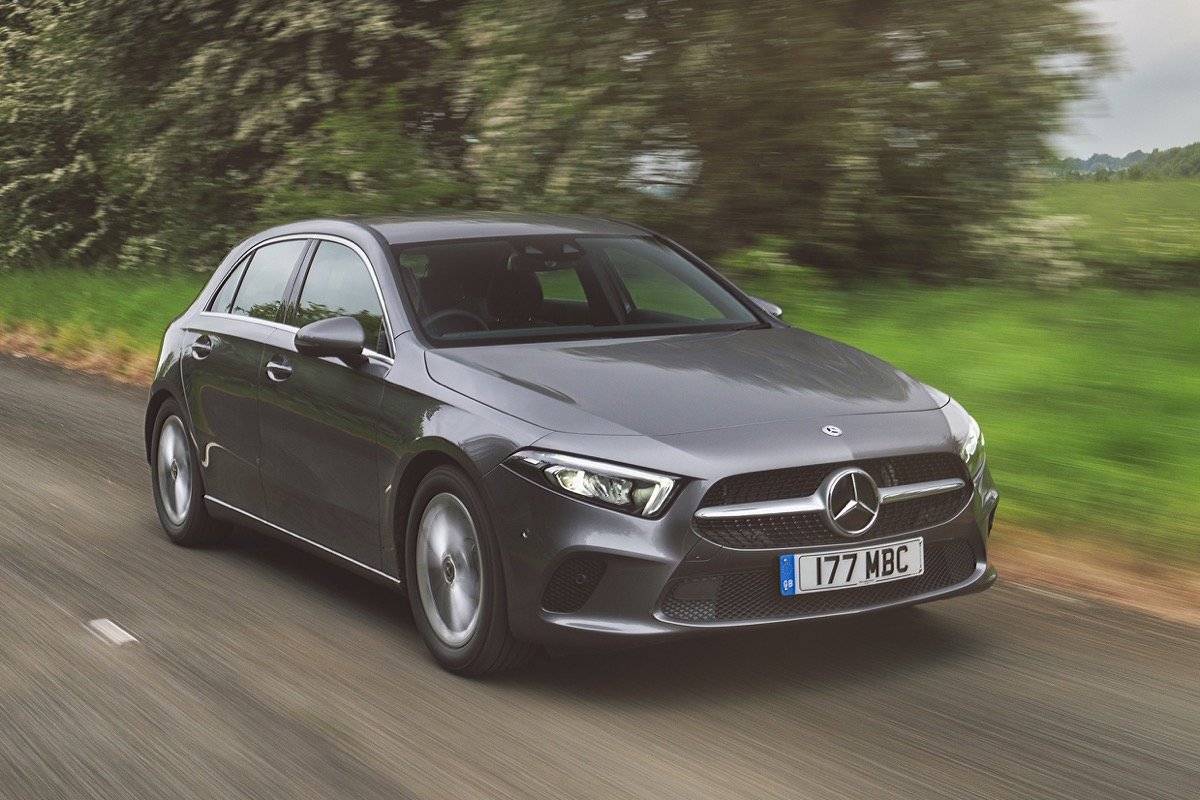 This is the fourth generation of Mercedes-Benz’s small hatchback and saloon, and serves as an entry point into premium badge ownership. As such, it’s a rival for cars like the Audi A3 and BMW 1 Series, but also for the bastion of quality family car that is the Volkswagen Golf. 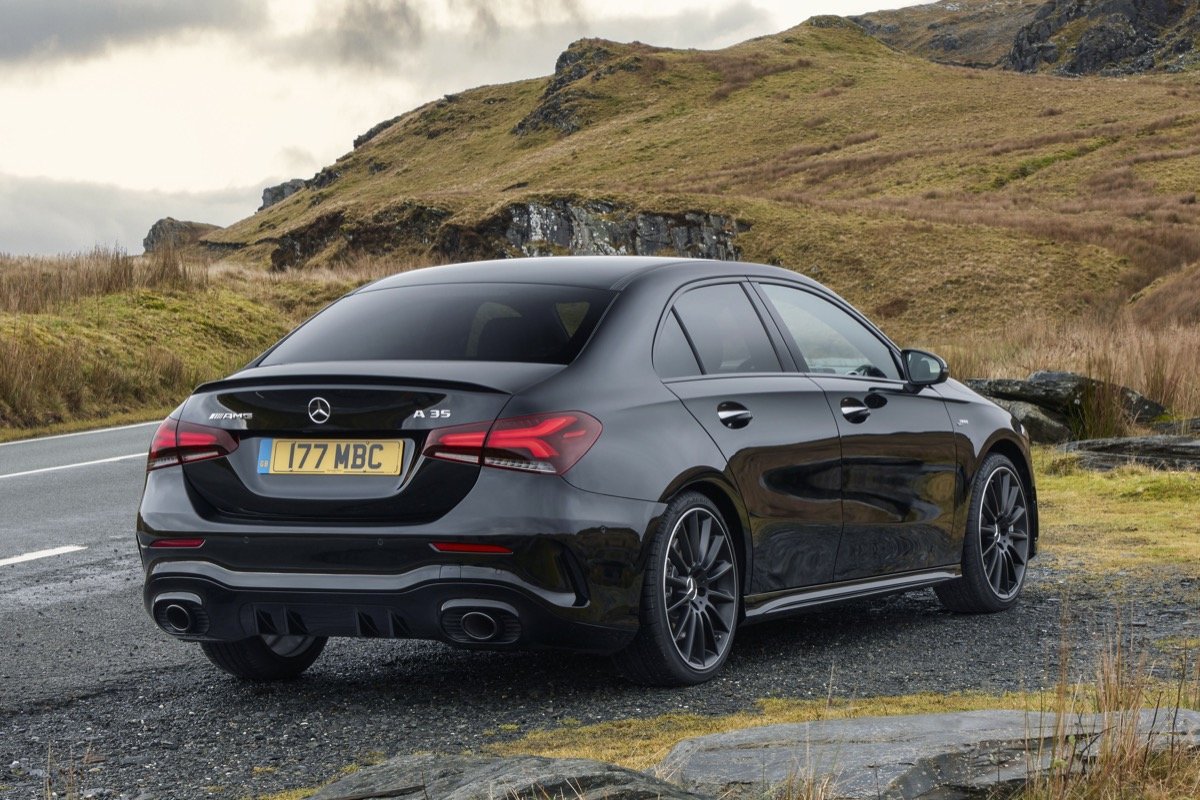 What is the Mercedes-Benz A-Class?

The A-Class has evolved over its life, from its introduction as an unusual hatchback-cum-MPV back in the 1990s to the smart, svelte hatchback and saloon you can buy today in this fourth-generation model. Mercedes has tried hard to ensure that A-Class customers get the full Merc treatment, so its style is heavily inspired by larger models, and the interior too has a focus on very modern style and high quality materials.

Inside, you get an interior that mirrors Mercedes’ more expensive models when it comes to design, with a wide, tablet-like setup of infotainment system screens dominating the dashboard.

There’s decent space for four adults, although three in the rear seats will be a bit of a squeeze, and there's slightly less rear headroom in the saloon than in the A-Class hatchback. The boot is almost exactly the same size as the A3 and the 1 Series hatch, and larger in the saloon than the hatch.

The driving position is quite high, which is worth noting if you’re a taller driver, but the seats are very comfortable, especially the sports seats in the sporty Mercedes-AMG models. Build and material quality feels excellent, and really makes you feel like you’re in a premium vehicle, which is important in a segment where Audi consistently nails interior feel. This is as good.

Non-AMG A-Classes come with different suspension setups, with more powerful and four-wheel drive versions having more sophisticated engineering underneath. Less powerful models have a simpler suspension that isn’t as good as it should be when it comes to ride comfort, with an unsettled feel on anything but the smoothest roads.

The handling is decent though, with a solid feel to the steering and poise and composure through the corners.

The 302bhp A35 AMG hot hatch model is stiffer and even more composed, and we’d recommend splashing out on the optional adaptive suspension which really keeps things stable through even hard cornering. Some might find it a little clinical when compared to, say, the Volkswagen Golf GTI, but it’s still a very capable and engaging drive. The A45 S, meanwhile, dials up the performance to 11 with a frankly ludicrous 415bhp from its 2.0-litre engine, and all-wheel drive for tarmac-shredding traction. It’s not cheap though, and only comes in hatchback form.

When it comes to engines in the rest of the A-Class range, the diesel line-up starts with the 114bhp A180d and progresses through the A200d with 148bhp and the A220d with 187bhp. The two higher-powered diesels get an eight-speed automatic gearbox, while the A180d has a six-speed manual or a seven-speed automatic

Petrol choices start with the 1.3-litre A180, which puts out 134bhp. The A200 has 161bhp and the A250 bumps the engine size up to 2.0 litres and has 221bhp. The A250 is only available with a seven-speed automatic transmission, while the other petrol models give you the choice of a six-speed manual too.

The plug-in hybrid A250e has a 1.3-litre petrol engine mated to an electric motor, which combined gives you 215bhp and up to 45 miles of electric-only driving.

Trim levels start with the entry-level SE, which is only available in the hatchback and will give you 16-inch alloy wheels and synthetic leather and fabric upholstery. The Sport model upgrades the wheels to 17-inches and gives you two-zone climate control. Sport Executive adds some extra features like automatic parking and a reversing camera and a larger 10.25-inch infotainment screen, while AMG Line gets things even sportier with a bodykit and 18-inch alloys. AMG Line Executive adds the same features as Sport Executive adds to Sport. Then AMG Line Premium has keyless entry and start, ambient lighting and some clever augmented reality features on the satnav, while AMG Premium Plus has nifty LED headlights and a panoramic sunroof. 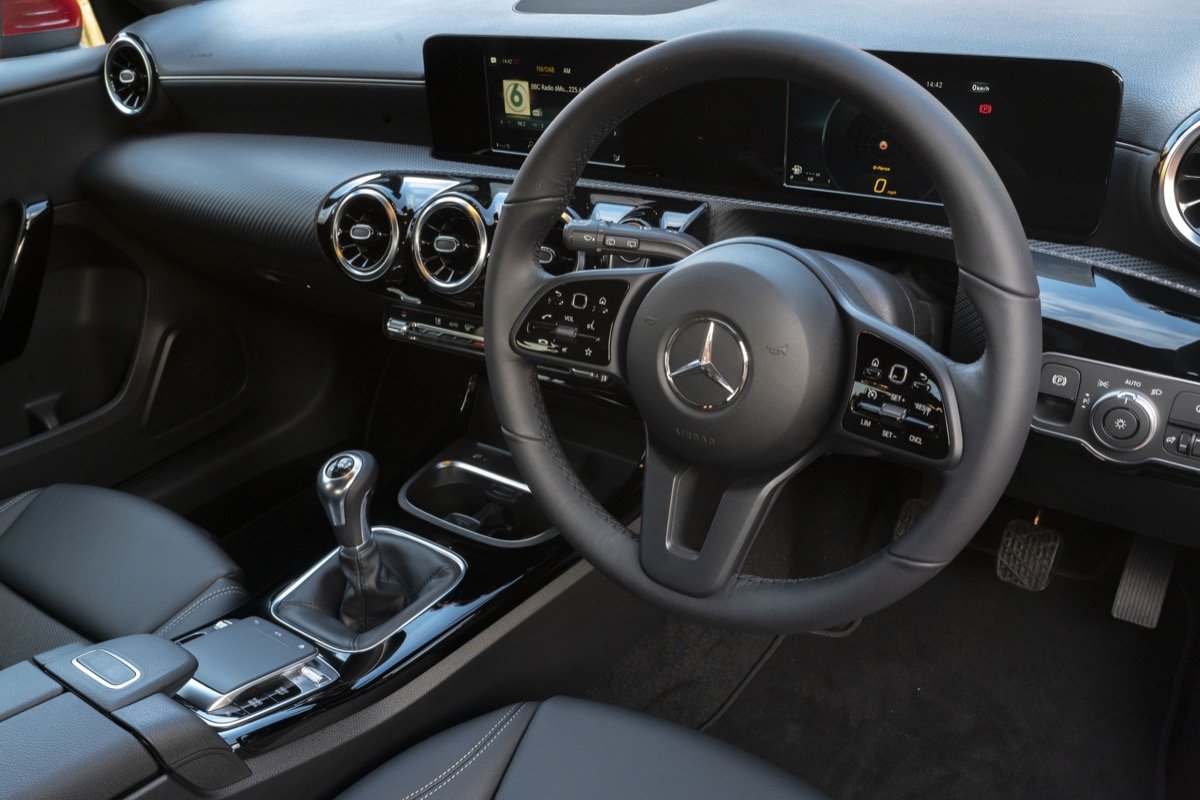 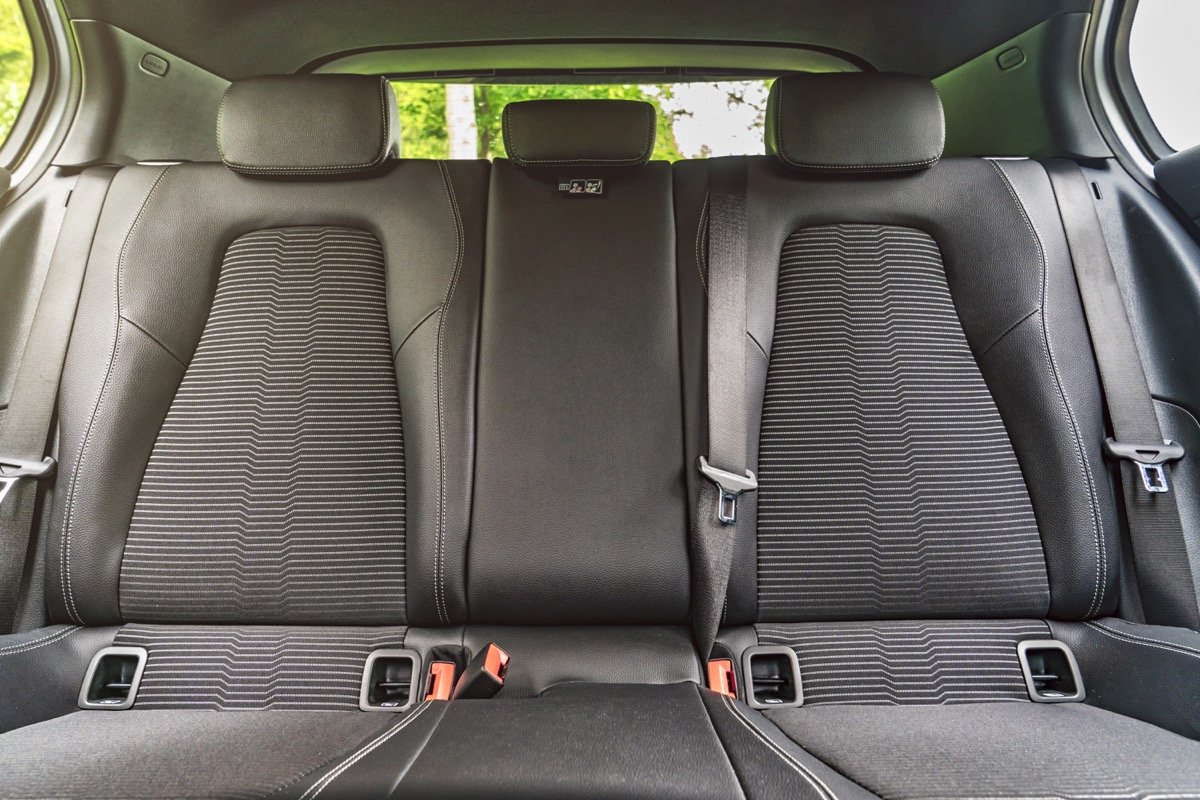 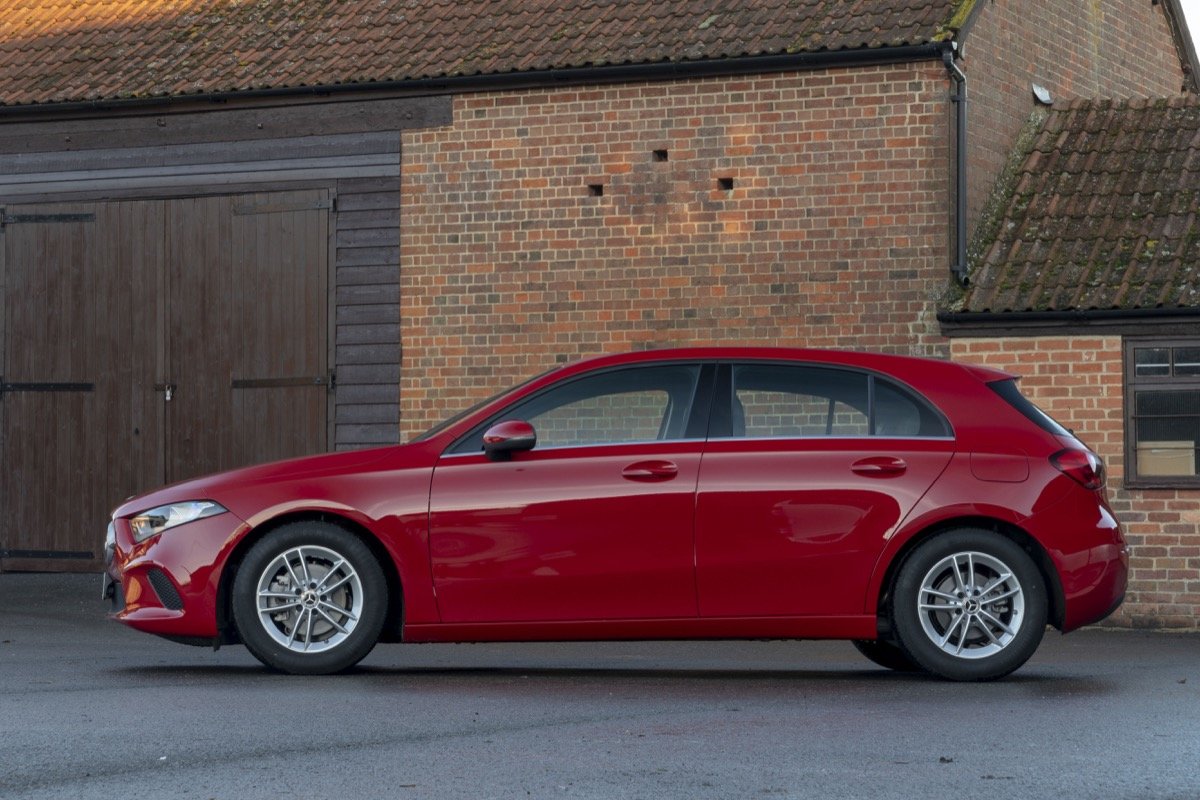 The A-Class is positioned as a premium product and, as such, will cost more to buy than, say, a Ford Focus or a Volkswagen Golf. But that also means it’ll likely hold on to its value better, although perhaps not quite as well as a BMW 1 Series or Audi A3, if industry predictions are to be believed.

When it comes to fuel, the A250e plug-in hybrid could be very petrol-efficient if you have somewhere to plug it in and can make journeys mostly on electric power, but otherwise the diesel models are the ones to go for. However, they’re pricier to buy, so do some number crunching to see if your mileage will make the better fuel economy worth the extra outlay. The A180d has an official combined fuel economy of up to 62.8mpg, while the A200d can in theory return up to 57.7mpg. The A220d, meanwhile, will give you 55.4mpg.

In the petrol range, you’ll get up to 47.9mpg in the A180 manual, but there’s no fuel economy penalty in the A200, which will give you the same mileage. Both will see a small drop if you go for the automatic gearbox. The A250, which is auto only, will give you up to 41.5mpg.

Unsurprisingly, fuel economy drops considerably with the AMG models, which are both all-wheel drive and geared towards performance rather than saving fuel. The A35 will in theory give you up to 34.9mpg and the A45 S up to 31.4mpg, but expect considerably less than that if you drive the cars in the manner in which AMG intended.

Mercedes offers fixed price service plans with prices starting at £30 a month, which will cover roughly a service a year. The costs will vary depending on the mileage and how old the car is. 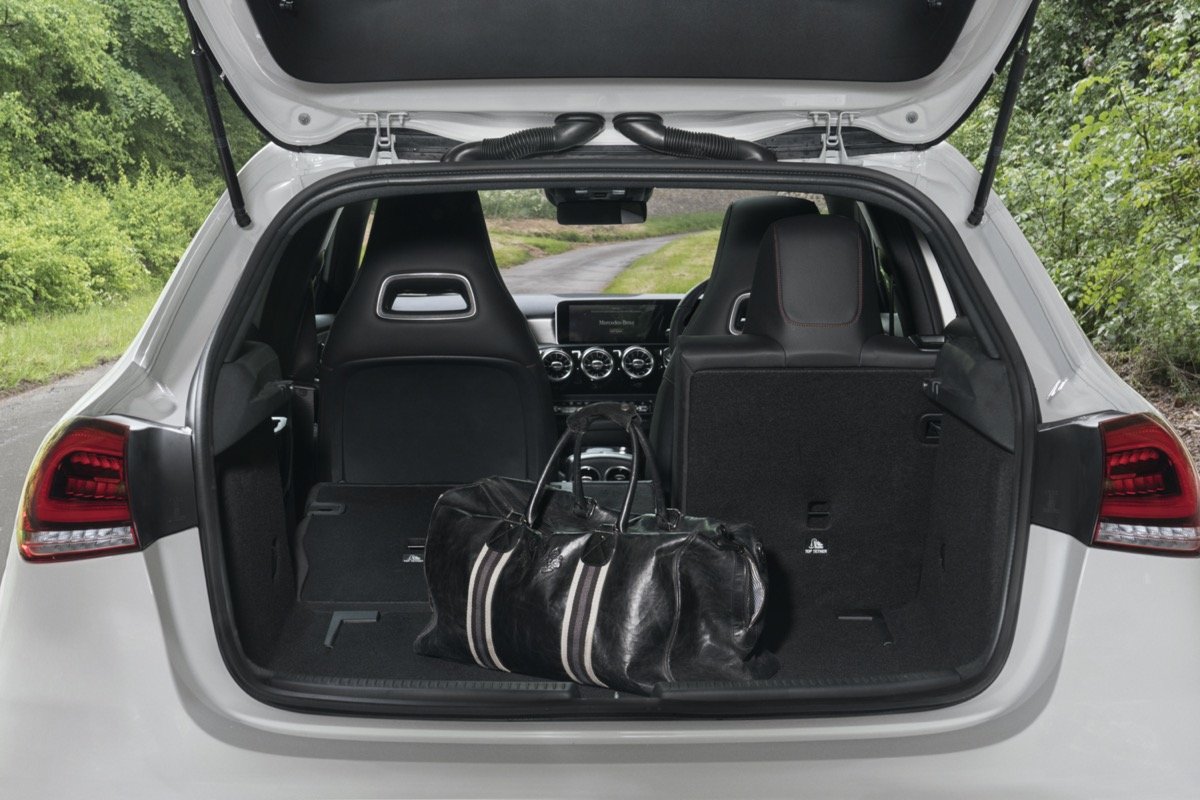 Sad to say, Mercedes doesn’t have a great record for reliability. Independent dependability studies tend to place them at or near the bottom of the manufacturer rankings, although in fairness BMW and Audi are usually there as well. The 2019 What Car? Reliability Survey put this generation of A-Class at 26th of 31 cars in its class, far below the Audi A3 but, in fairness, ahead of the outgoing BMW 1 Series. The 2020 Driver Power survey was slightly more encouraging, with the A-Class rated 36th of 75.

For more detail than that, we’ll need to wait; the A-Class is too new for a pattern of common problems to have appeared yet.

Should anything go wrong, Mercedes offers a three-year, unlimited mileage warranty on the A-Class. 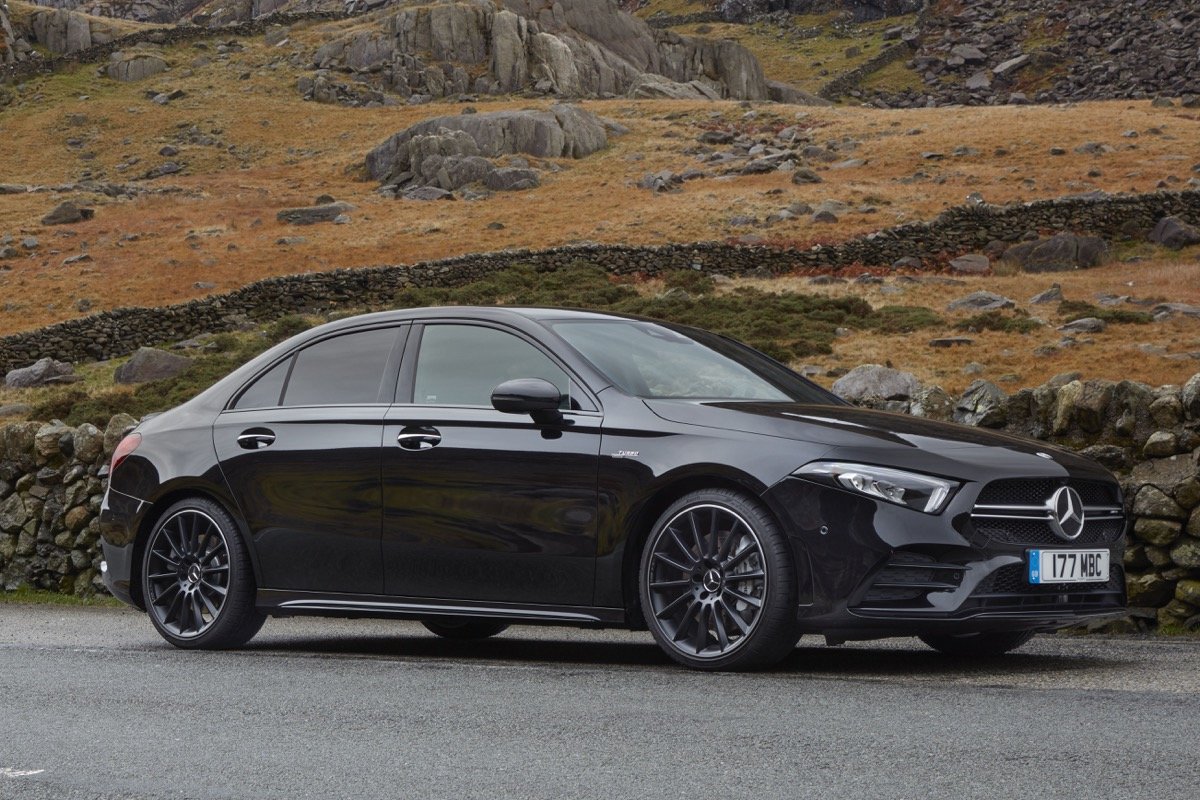 The fourth generation of Mercedes A-Class is its best yet, a stylish and well-made hatchback and saloon, with some cutting edge technology and a genuinely luxurious interior. It’s maybe not the most involving car of its type to drive, even when compared to cheaper cars like the Ford Focus or Volkswagen Golf, but that won’t matter to a large majority of its buyers. It’s comfortable and more economical than before, and there’s enough variety in the range to ensure that there’s a model to suit any one of a wide range of needs, from those wanting a monstrous hot hatch to those who prefer a plug-in hybrid, and everyone in between. It’s well worth checking out.

Search for a Mercedes-Benz A-Class on CarGurus