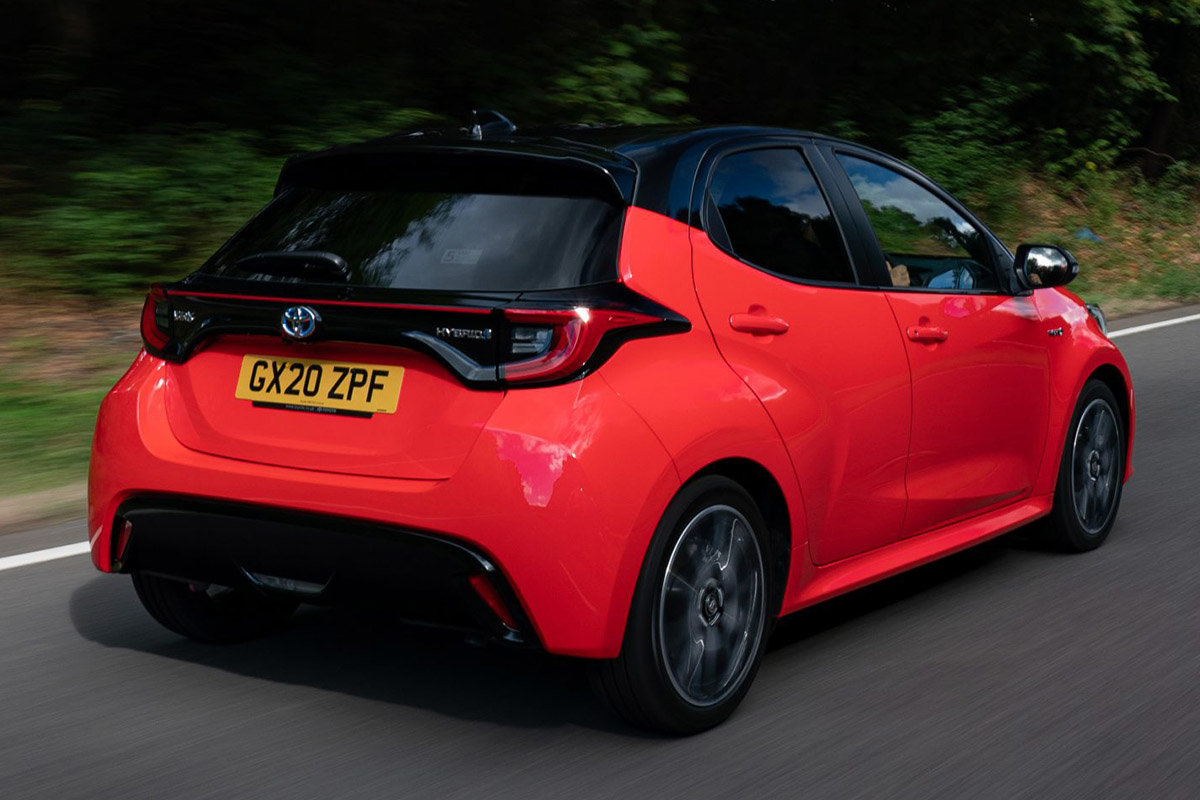 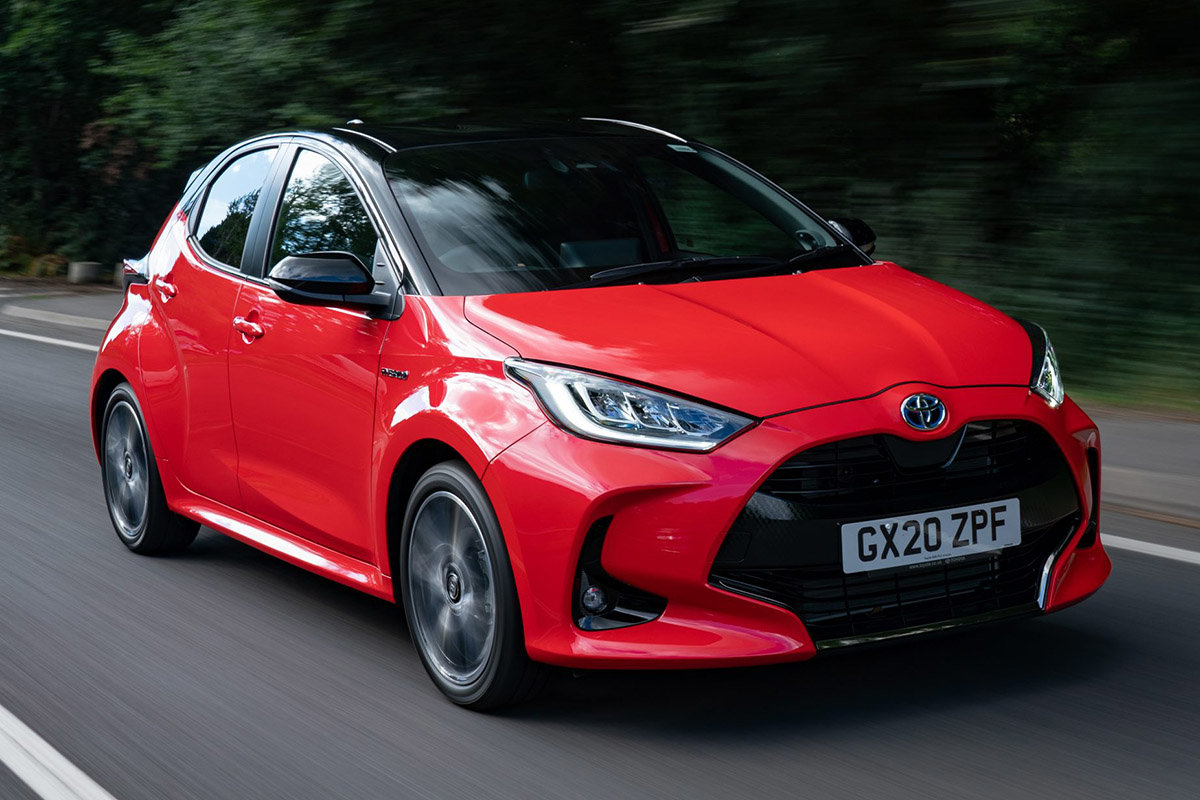 With its pumped-up styling, the new Toyota Yaris is a bit of a head-turner. Yet beneath the skin, its hybrid powertrain means it’s incredibly efficient in the real world, especially around town. It’s a shame that the ride is quite firm, and some cheap plastics inside keep the interior from feeling as plush as it could. But otherwise, the Yaris is a smart supermini choice. And if it's a hot hatch you're after, the GR Yaris is one of the most exciting cars of its type. Yes, really. 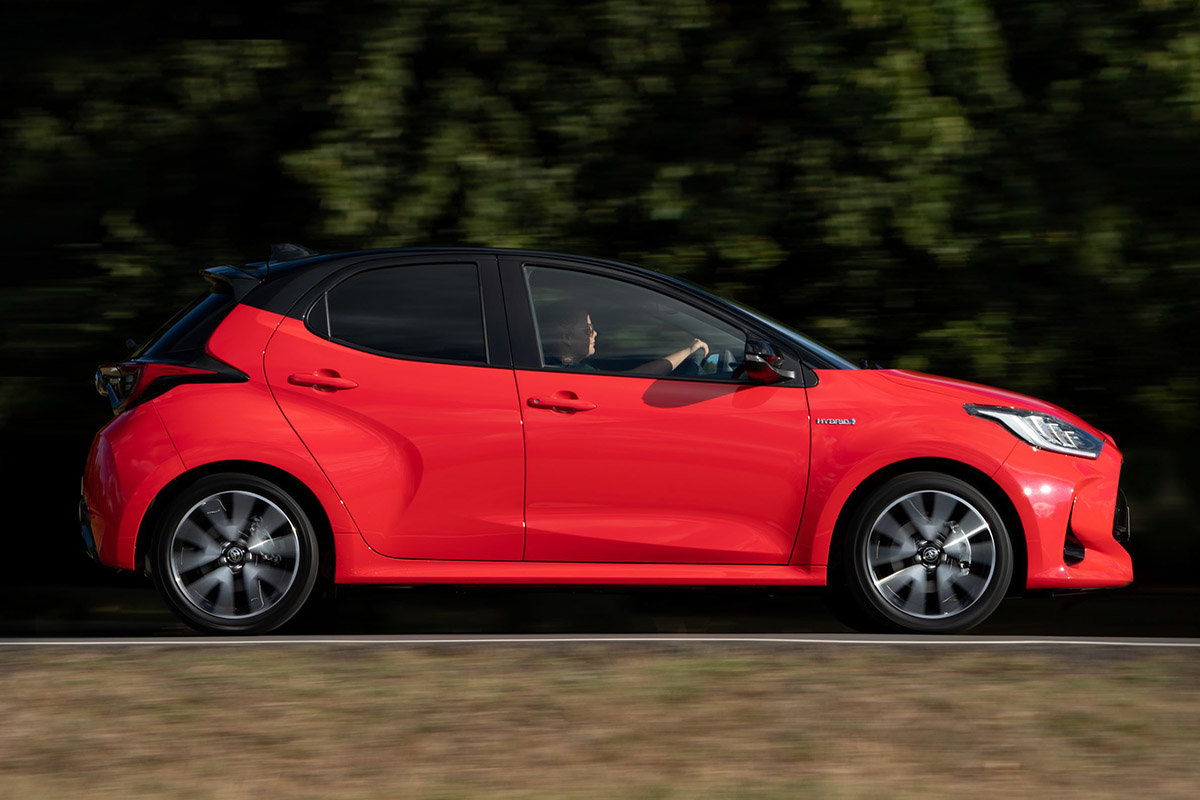 What is the Toyota Yaris?

Rarely do stylish and sensible go hand-in-hand, but in the Toyota Yaris, the twain could well meet. This latest model swaps the staid and sensible styling the Yaris has gained a reputation for until now for a sports-car-esque nose, a swooping side profile and a wide, chunky behind.

Yet beneath the striking five-door bodyshell – and much like its bigger brother, the Toyota Corolla – the Yaris is now hybrid-only. There are no pure petrol or diesel versions available any more (with one small exception, more on that later), and that makes the Yaris particularly economical. Throw in the sensational warranty, and you can see why it’s more than just a pretty face.

Hybrid supermini rivals come in the form of the Renault Clio and Honda Jazz, but if you're agnostic about hybrid power, then cars such as the Vauxhall Corsa, Volkswagen Polo, Hyundai i20, Nissan Micra, Peugeot 208, Seat Ibiza and Mazda 2 will also be competing for your cash.

The Yaris scores well on practicality, with plenty of space in the front seats, and while the back seats feel a little tight, they’re no more so than most small hatchbacks’. Boot space isn't quite as generous as it could be, though, so if you want to carry bulky items with any regularity, you might be better off looking elsewhere. The Renault Clio comes with a larger boot, for example, as does the Honda Jazz – and the Jazz’s clever flip-up rear seats make it more versatile, too.

Inside, there’s a smart dashboard with unusual pod-like gauges, and for the most part, it’s screwed together well, with only a few slightly cheap plastics here and there taking the shine off.

And despite the funky styling, all the controls are where you’d expect them to be, which means the Yaris is pretty easy to find your way around. Less so is the infotainment system, which is mounted high up in the centre of the dashboard; the screen is large, crisp and clear, but some of the menus can be a little fiddly, and finding the radio station you want takes practice.

Out on the road, the Yaris is good, but not perfect. It feels stable and secure most of the time, and the hybrid engine is perky and responsive to the throttle, which makes it great for nipping into gaps around town. It’s even reasonably quiet; there’s not too much engine noise when you’re just pootling around, and even when you push the Yaris a bit harder, the raspy exhaust note you do get doesn’t become overly intrusive.

The downside is that it rides a little firmly; while it takes larger lumps and undulations in its stride, the Yaris never settles down fully. That means you can feel all the little imperfections in the Tarmac jiggling the car around unless the road is mirror-smooth – which, of course, is rare in the UK.

Light steering does make it easy to drive, mind you, as does the fact that every Yaris comes with a CVT-style automatic gearbox, and if you need to change direction quickly in an emergency, there’s plenty of grip and the steering reacts quickly, so the Yaris feels agile. Having said that, there’s not much feel, so if you like to enjoy hustling your supermini along a country lane, you’ll find a Ford Fiesta is more fun.

You could say the regular Yaris hybrid is the Dr Jekyll of the piece - sensible, dependable and prudent - while the GR Yaris would definitely be the Mr Hyde, with its unhinged performance and aggressive demeanour. That's partly due to the fact it's in possession of the world's most powerful three-cylinder engine, a turbocharged 1.6-litre petrol punting out 257bhp, but there's much more to the GR's repertoire than just brute force.

You see, this isn't merely a regular Yaris with a more powerful engine and a few bolt-on spoilers. No, this is a car engineered from the ground up as a rally car, a version of which is then offered for sale with the public in order to comply with competition rules, or what's known as a 'homologation special' to those in the know. As such, it's built on a completely different chassis, and has a bespoke three-door body, those doors being made from lightweight aluminium and suspended underneath a carbon-fibre roof that further reduces weight and lowers the car's centre of gravity.

Tipping the scales at just 1300kg, the GR can sprint for 0-62mph in just 5.5 seconds, and in truth, the acceleration feels even more frenetic than that number suggests. The engine punches hard from all over the rev range, and it just loved to be thrashed, urging you on to tickle the redline between every shift of the slick-feeling six-speed manual gearbox.

The rest of the controls are just as satisfying and responsive, too, with special mention going to the steering. It's not quite what you'd call brimming with feel, but there's enough there for you to feel thoroughly immersed in the experience, and it's nice and quick, both to react and to turn.

However, it's the GR's handling that dazzles most. For starters, its flyweight stature helps it change direction in a crisp, agile manner, and so does the brilliant suppression of body lean and seemingly unshakeable grip . The suspension has an uncanny knack of riding bumps of all shapes and sizes without breaking contact with the road surface, and as well as helping to maximise traction, this compliance also helps deliver a surprising level of everyday comfort, although there's no denying that you will feel a decidedly sporting edge to the ride.

The thing that really marks the GR out against other hot hatches, though, is its clever four-wheel drive system. Set to Normal mode, it sends 60% of the drive to the front wheels and 40% to the rears, and that gives you a familiar, approachable feel that lets you comfortably explore the car's dynamic properties. Sport mode switches it to 30% at the front and 70% at the rear, giving a much more rear-drive sensation, while Track mode splits the drive 50/50, optimising grip and traction for banging in fast lap times on track days. It all helps give the GR a truly multi-layered driving experience, and one that never fails to put a huge, dopey grin on your face.

The GR comes in one standalone trim level, but it can be enhanced with an optional Circuit Pack that adds a stiffer suspension, stickier tyres and a limited slip differential. 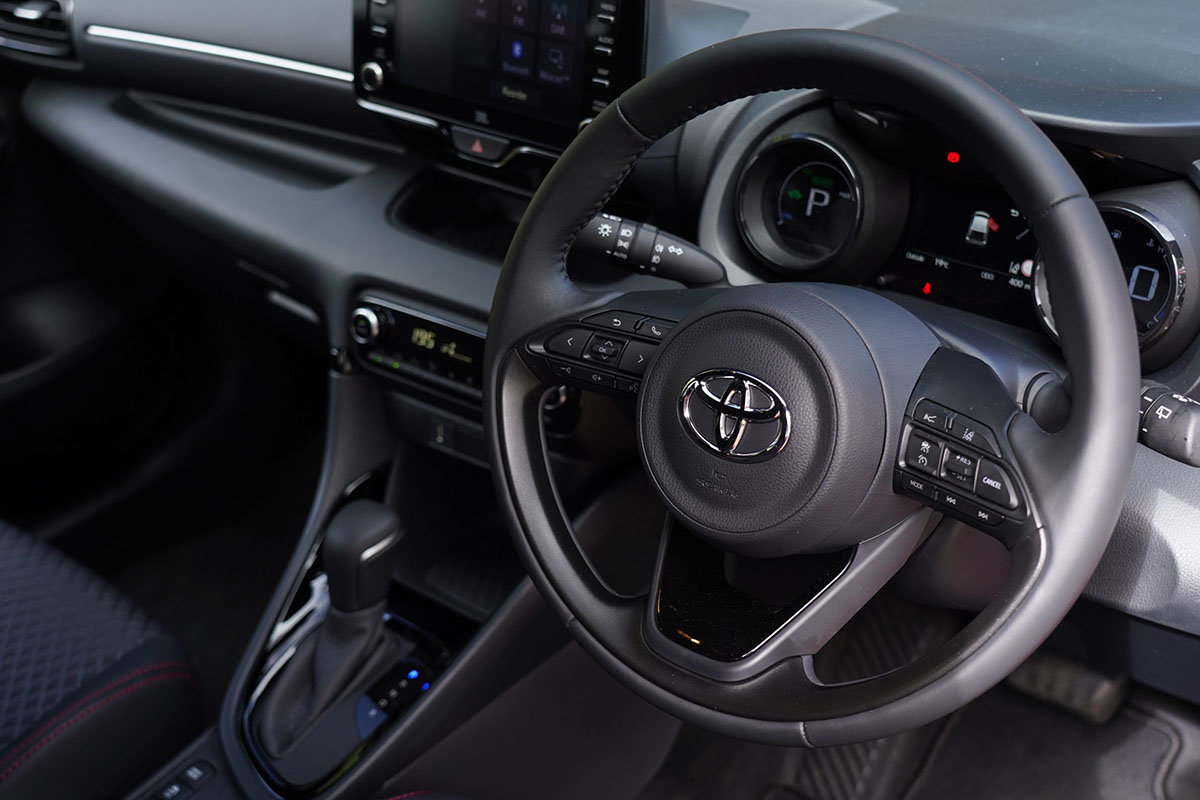 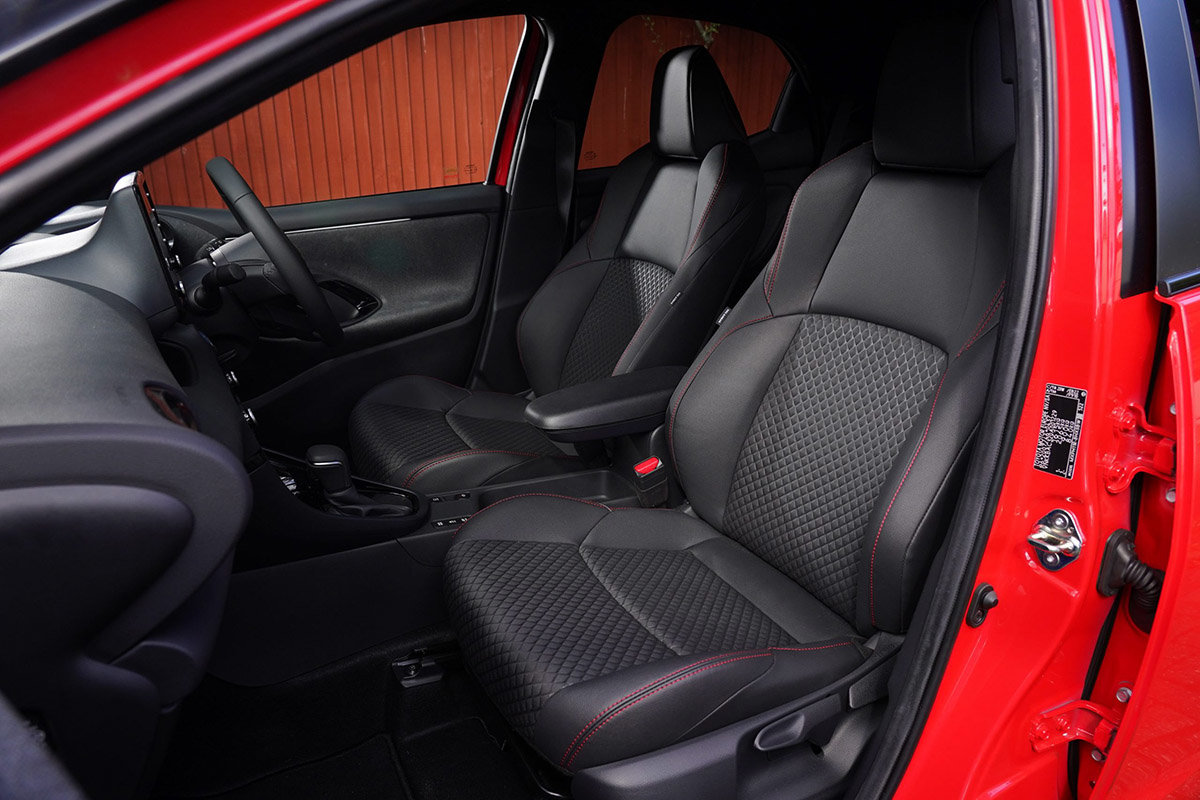 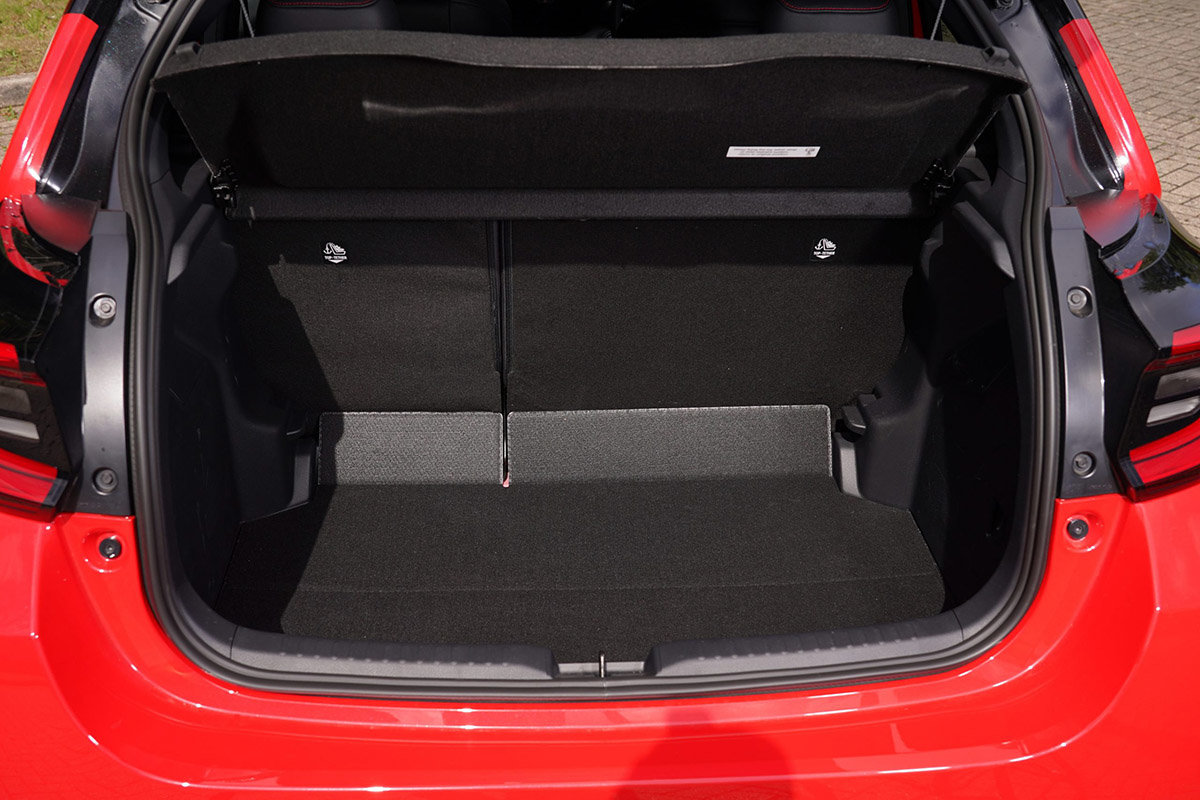 This is where the Yaris really starts to shine, thanks chiefly to the impressive fuel economy of its hybrid engine.

You can expect to see as much as 60-65 mpg in real-world motoring, and that isn’t just on the motorway; because of the clever way Toyota’s hybrid system harvests energy whenever you’re coasting or braking in traffic, it should prove just as economical around town – which, of course, is where the Yaris will be most at home.

And because the Yaris is a hybrid, it counts as an “alternative fuel vehicle” according to the Government, and that means a slightly discounted annual tax rate compared to a petrol or diesel car. And if you’re choosing one as a company car, you’ll find the low emissions bring down the Yaris’s tax costs.

Of course, none of that applies to the GR which - when it has the world's most powerful three-cylinder engine and four-wheel drive - it's no surprise will be much thirstier. Still, an official average of around 34mpg isn't too bad, all things considered.

Toyota’s servicing prices are reasonable, and as an additional bonus, the company lists them on its website so that it’s easy to see how much your next service will set you back. What’s more, Toyota offers service plans that help you spread the cost by paying monthly.

And whereas some rivals use a timing belt within the engine, which needs to be changed every few years at some cost, the Yaris uses a metal chain instead, which should last the lifetime of the car. 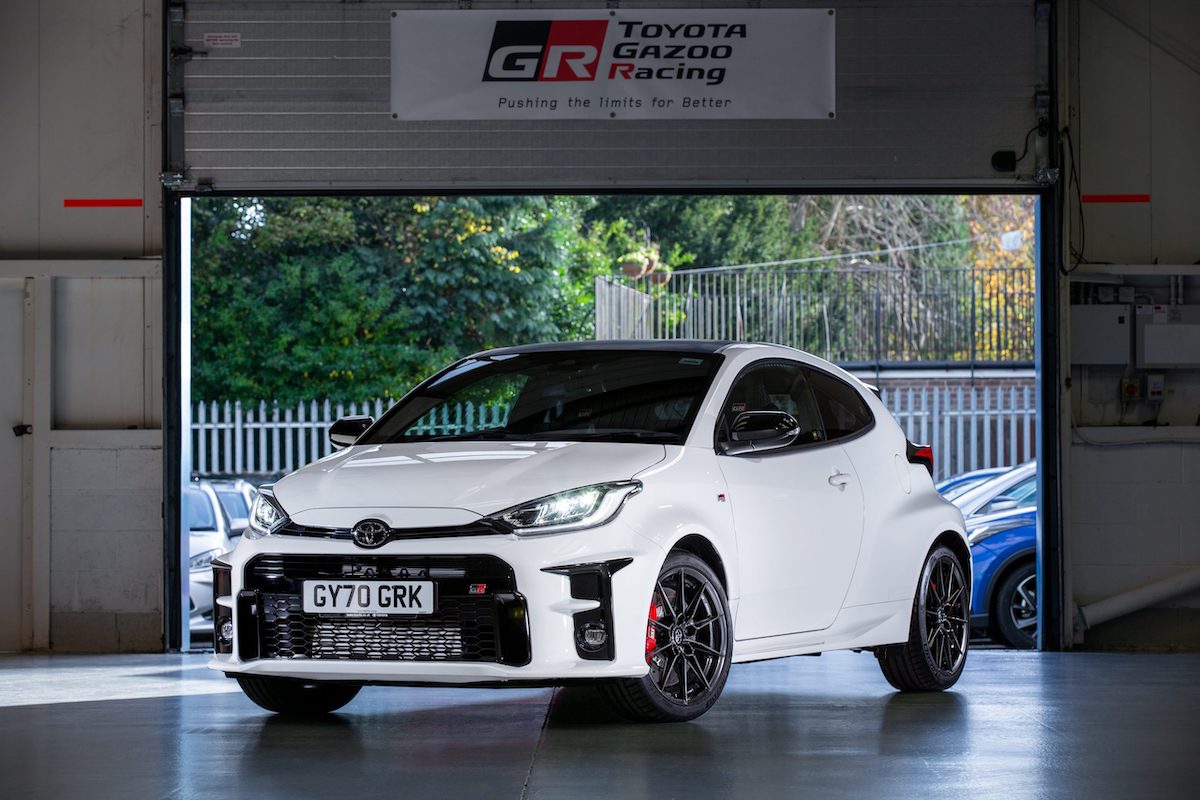 This generation of Yaris is too new for us to have any concrete data on its reliability, but the signs are at least promising.

For one thing, Toyota has a pretty solid reputation for reliability – its hybrids, in particular, are favoured by taxi companies for that very reason. So it follows that the Yaris should prove dependable.

What’s more, while the last-generation Yaris Hybrid was somewhat different beneath the skin, it scored very well in reliability studies, so it follows that this model should, too.

In fact, the last Yaris Hybrid was deemed to be the most reliable car in the 2020 What Car? Reliability Survey, with an outstanding score of 99.5%, and although Toyota as a brand finished below average in the 2019 JD Power Vehicle Dependability study, it offers a stunning warranty package on all its cars, whereby if you get your car serviced according to schedule within the official Toyota dealer network, then your standard three-year warranty is automatically extended by a year, up to a maximum of ten years or 100,000 miles. This warranty package also applies to the GR, and it's not invalidated by participation in track days. 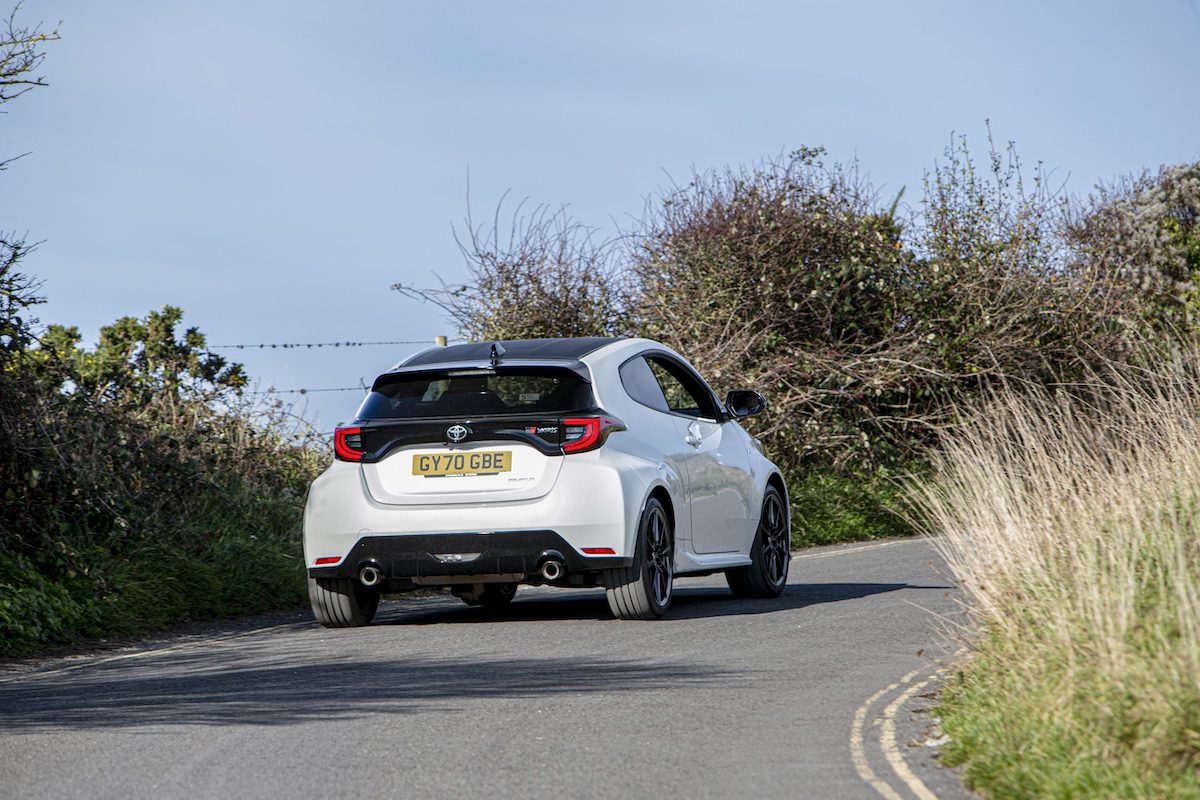 Beneath its eye-catching lines, the Yaris is a car of real talent. It is a shame the ride’s a touch on the firm side, and it’d be even better if the interior wasn’t quite so dour. But on the plus side, the Yaris feels nippy and nimble, even if it isn’t the last word in outright fun, and the savings you’ll make on its running costs should mean you’ll at least be laughing all the way to the bank.

It’s also easy to drive, well equipped – apart from the slightly jarring lack of sat nav – and decent value. And of course, there’s that long warranty to fall back on if anything should go wrong. Other hybrid models like the Renault Clio and Honda Jazz are worth a look, of course, the former offering a smoother driving experience and the latter bettering the Yaris's practicality. But on the whole, this is a sound and sensible supermini with a welcome dose of style that means it should appeal to the heart as well as the head.

And the GR? Well, it's no exaggeration to say that it's one of the most exciting, engaging and entertaining hot hatches money can buy. Yes, it really is that good.

Search for a Toyota Yaris for sale on CarGurus.