Yaris crunches when you come to a stop

I've checked the pads it's more like a gear crunch 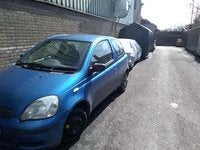 Do you have any more information on the nature of your fault Leighas? Whereabouts does the noise seem to be coming from - the back, the front, one side or the other? When it happens are you changing gear? If it's when you're coming to a stop we'd re- examine your brakes - the discs could be scored causing the pads to be noisy. Or it could be something on the suspension that's failed which is moving as the car is coming to a halt. Or it could be a failed engine mount allowing the engine to move as you come to a stop. Or even a wheel bearing that's about to collapse, although I would have thought this would be noisy at speed too. If you can't pinpoint the fault do take it to a garage for a second opinion, or at least to make sure the car is roadworthy... it doesn't pay to gamble with problems when they could be related to the brakes! Let us know how you get on, or if you've managed to pinpoint the fault.

Content submitted by Users is not endorsed by CarGurus, does not express the opinions of CarGurus, and should not be considered reviewed, screened, or approved by CarGurus. Please refer to CarGurus Terms of Use. Content will be removed if CarGurus becomes aware that it violates our policies.