Ford sapphire not starting petrol cames to carb but no spakker

These Sapphires came first with the fuel pump external to the fuel tank, then later on, they were introduced with the in tank pump. Check the operation of the fuel pump at the rear of the car near the fuel tank. I've had some of them where the electrical connector was not secured or plugged in correctly. Check also for blockages on the pump intake. This could also be caused by the sieve that is in the fuel pick-up in the tank that is blocked. 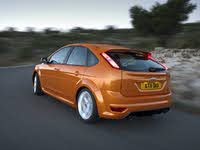 Looking for a used Ford in your area?

Content submitted by Users is not endorsed by CarGurus, does not express the opinions of CarGurus, and should not be considered reviewed, screened, or approved by CarGurus. Please refer to CarGurus Terms of Use. Content will be removed if CarGurus becomes aware that it violates our policies.