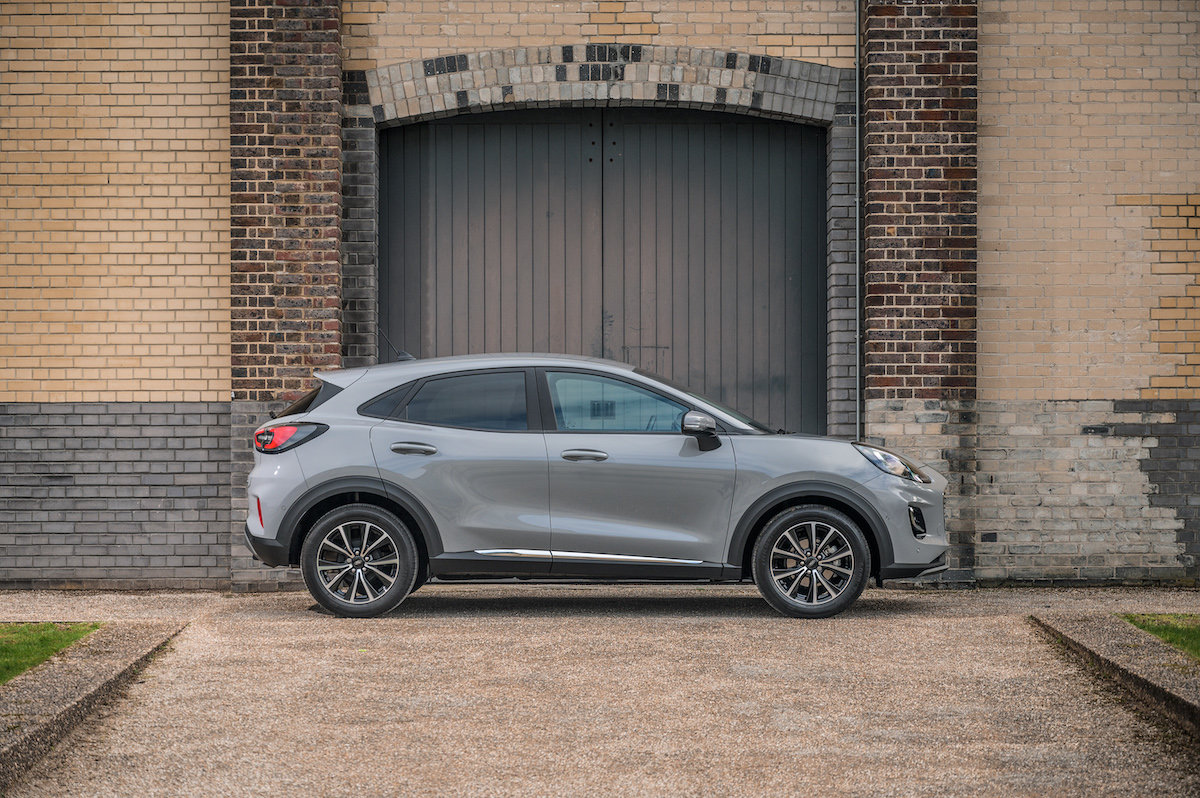 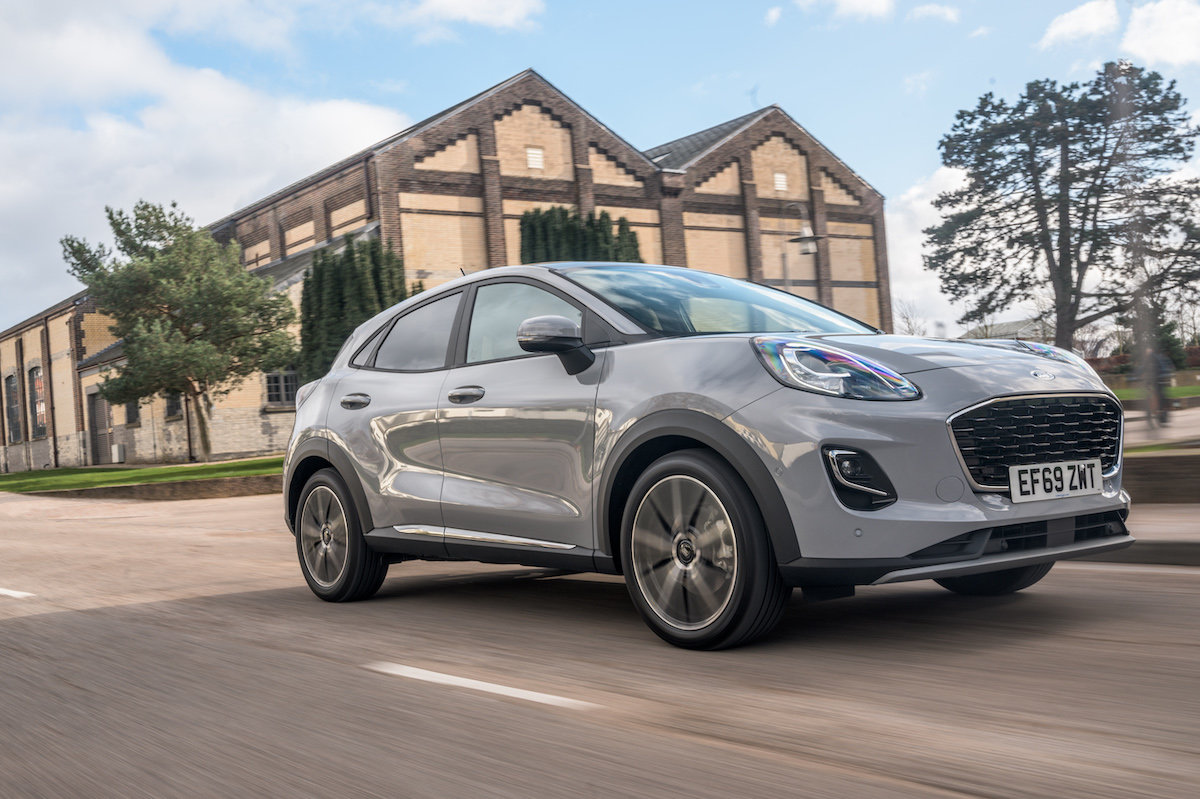 The Ford Puma only arrived in 2019, which is almost a decade later than the trail-blazing Nissan Juke. The Puma shares many of its mechanical bits and bobs with the Fiesta supermini, which means it’s fun to drive, and Ford has also been a bit more daring with its styling than many rivals, while space and practicality are also super-impressive. Worth the wait, then? You better believe it. 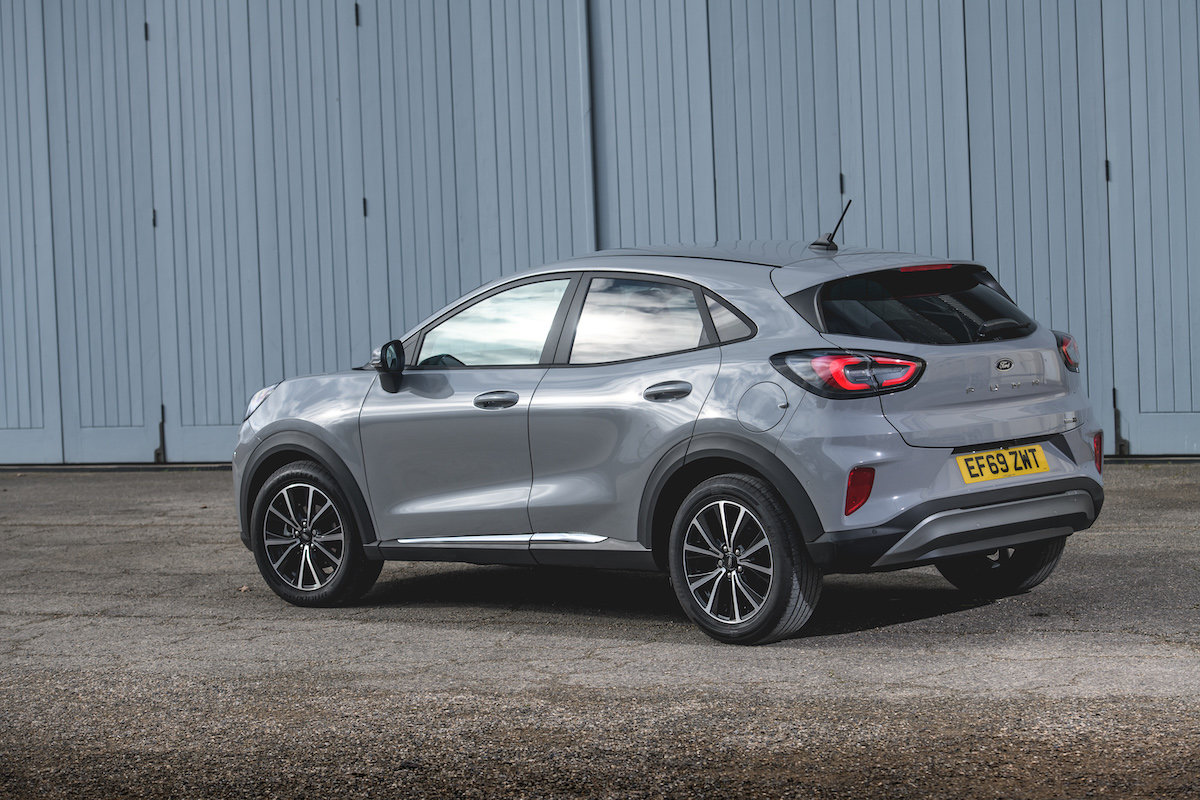 What is the Ford Puma?

When Ford announced the Puma compact SUV, or more correctly, crossover, the internet was awash with naysayers bemoaning Ford for using the Puma badge on its new crossover model. It's hard to imagine why anyone really cares that the badge was previously used on a small coupe, especially as the Puma name had lain dormant for nearly twenty years before Ford stuck it across the pretty rump of its latest crossover.

Fitting under the similarly feline-themed, if incorrectly spelled, Kuga in the Ford crossover line-up, and alongside the unremarkable – in both looks and driving manners – EcoSport, the Puma has injected a bit of style into compact crossover class. Ford hasn’t forgotten that the crossover class is supposed to be a bit more practical, too, and has given the Puma boot space that’s among the biggest in the class.

Pragmatism aside, being based (loosely) on the Fiesta, it’s fun to drive. The Puma is easily the sharpest, most engaging car in a class that’s largely devoid of smiles behind the wheel. The steering is light and accurate, the suspension controls the body and wheels well, delivering the overall effect of an exciting, enthusiastic car, but one with a decent ride quality as well.

Ford has clearly focussed on practicality with the Puma, and despite its supermini roots this compact crossover is surprisingly spacious. In the back there’s just enough room for two six-foot adults to squeeze in, although they won’t thank you for keeping there for any length of time, but for kids it’s great. Access is also fairly easy thanks to wide-opening rear doors, while the car’s slightly raised ride height makes it a fraction easier to load and unload child seats.

Up front there’s a wide range of seat and wheel adjustment for the driver, so there should be no problem getting comfy. You can even get the seat nice and low for a sporty feel behind the wheel, or jack it right up to make the most of the Puma’s narrow height advantage of more conventional small cars. There is also a useful amount of storage in the Puma, with deep door bins, a large glovebox and lidded cubby between the front seats that also serves and an armrest. Ahead of the gear lever is a handy recessed tray for storing your smartphone, while in the roof behind the rear-view mirror is a neat pop-down sunglasses holder.

More impressive is the Puma’s noot, which at 456 litres rivals some models from the class above. There’s also a false floor that can be used to keep valuables out of sight or lowered to create more space for larger items. Fold the 60/40 split/fold rear bench and there’s up to 1,216 litres of carrying capacity.

However, the star of the show is the deep ‘MegaBox’ compartment that’s hidden beneath the boot floor. This adds 80-litres of additional capacity, in a deep, waterproof-lined space and comes complete with a drainage plug, making it ideal for transporting muddy boots or sea water-soaked wet suits.

That crisp handling chassis is powered in the main by a pair of petrol engines mated to mild-hybrid (MHEV) technology. This is basically an advanced stop-start system that uses an electric motor to assist the 1.0-litre three-cylinder EcoBoost petrol engine to improve fuel economy and reduce emissions. It works really well, in either its 155hp or 125hp guises. The lower-power version is offered with either a six-speed manual gearbox, or a seven-speed automatic gearbox, while the 155hp model is only offered with a six-speed manual.

Above those volume models, Ford has added a sporting flagship model that further ups the enjoyment to be had from the Puma’s excellent chassis. The Puma ST gains its own more focussed suspension settings, and it drops the mild hybrid system, instead gaining a 1.5-litre EcoBoost petrol engine with 200hp.

You don’t need that range-topping ST to have fun with the Puma, though, because it is enjoyable regardless of which model you pick. And if you value ride comfort over outright agility, the standard car with its smaller 17-inch alloy wheels and less focussed suspension will be more appealing.

Yet all Pumas feature accurate steering, strong grip and agile handling, making them some of the best small cars to drive. Even keen drivers will find something to enjoy here, this small Ford having enough dynamic appeal to make you genuinely consider taking the long way home.

Ford might offer four regular trim levels with the Puma, but such is the competitiveness in this class you really, really don’t need to pick anything other than the entry-level Titanium model. It comes with everything you could possibly ask for and more. The standard equipment list includes 17-inch alloy wheels, a leather steering wheel and gearknob, cruise control, lane-keeping assist and lane-departure warning, automatic headlamps with automatic high beam and rain-sensing wipers.

That's not the end of the list, though, as rear-parking sensors, a quickclear heated windscreen, climate control air-conditioning, an eight-inch touchscreen infotainment system with voice control, Apple CarPlay and Android Auto are also included.

Pick the ST-Line and above, and not only do you get a 12.3-inch digital instrumentation panel and a slightly more aggressively styled exterior, but you get firmer sports suspension, which you might not appreciate due to its more compromised ride. In a quirk of specification juggling, someone within Ford has seen the need to pull the electronic climate control that’s standard in the Titanium model below the ST-Line, and instead give it manual air-conditioning.

If you want that back and like the ST-Line styling kit, then you’ll need to spend £1,100 more for an ST-Line X, which gains it back, as well as benefiting from other desirable additions like a Bang & Olufsen 10-speaker stereo and a wireless charging pad for your smartphone (if it’s equipped to charge wirelessly, of course).

At the very top of the range is the ST-Line Vignale, which adds natty quilted leather trimmed and heated seats on the inside, and bespoke 18-inch alloys and LED daytime running lights on the outside.

All versions of the Puma are fitted with Ford’s SYNC 3 infotainment system, which features an 8-inch touchscreen with crisp graphics and logical menus. It also responds quickly with little lag and packs features such as Apple CarPlay and Android Auto, as well as over-the-air updates for software and apps. 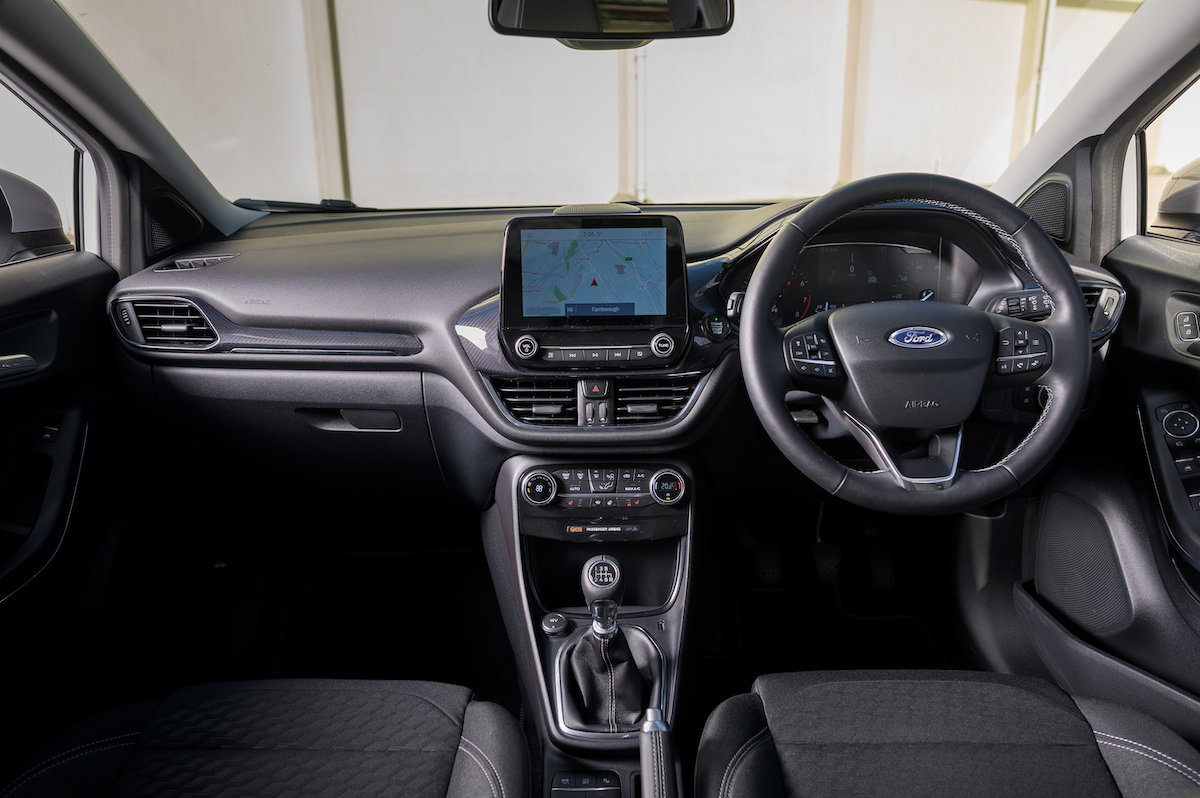 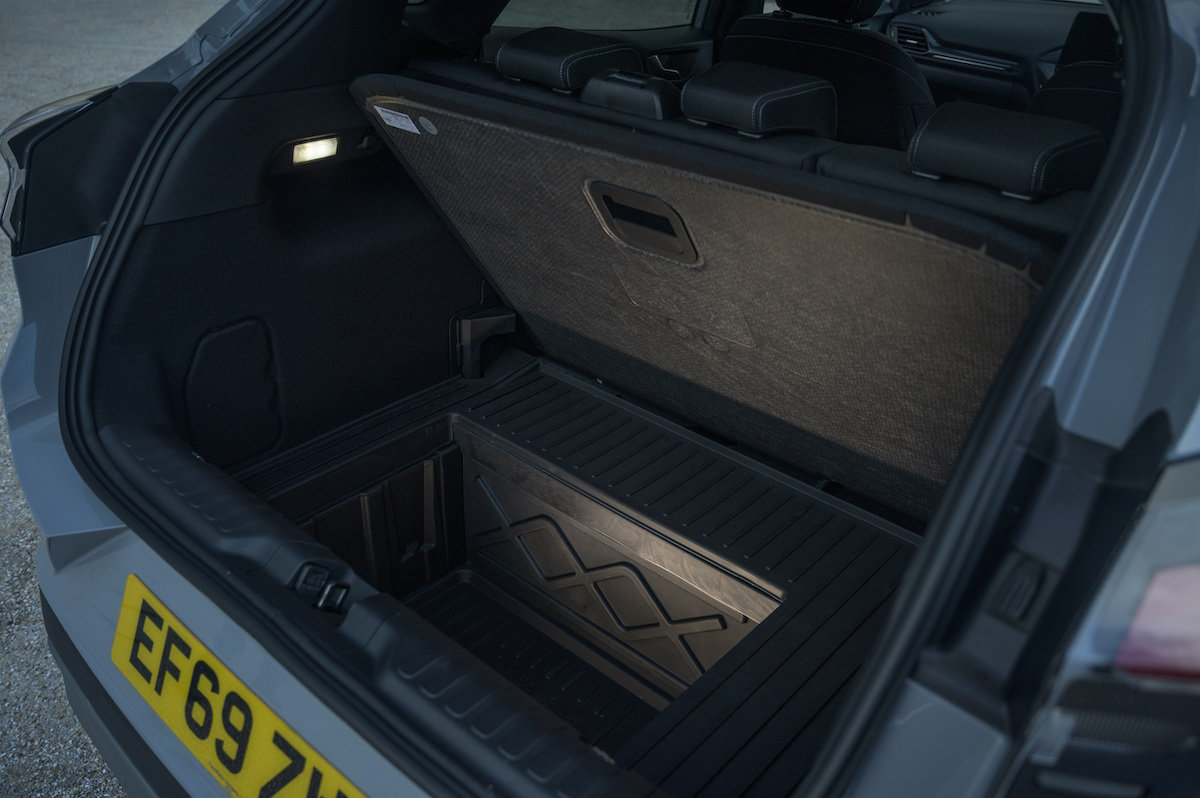 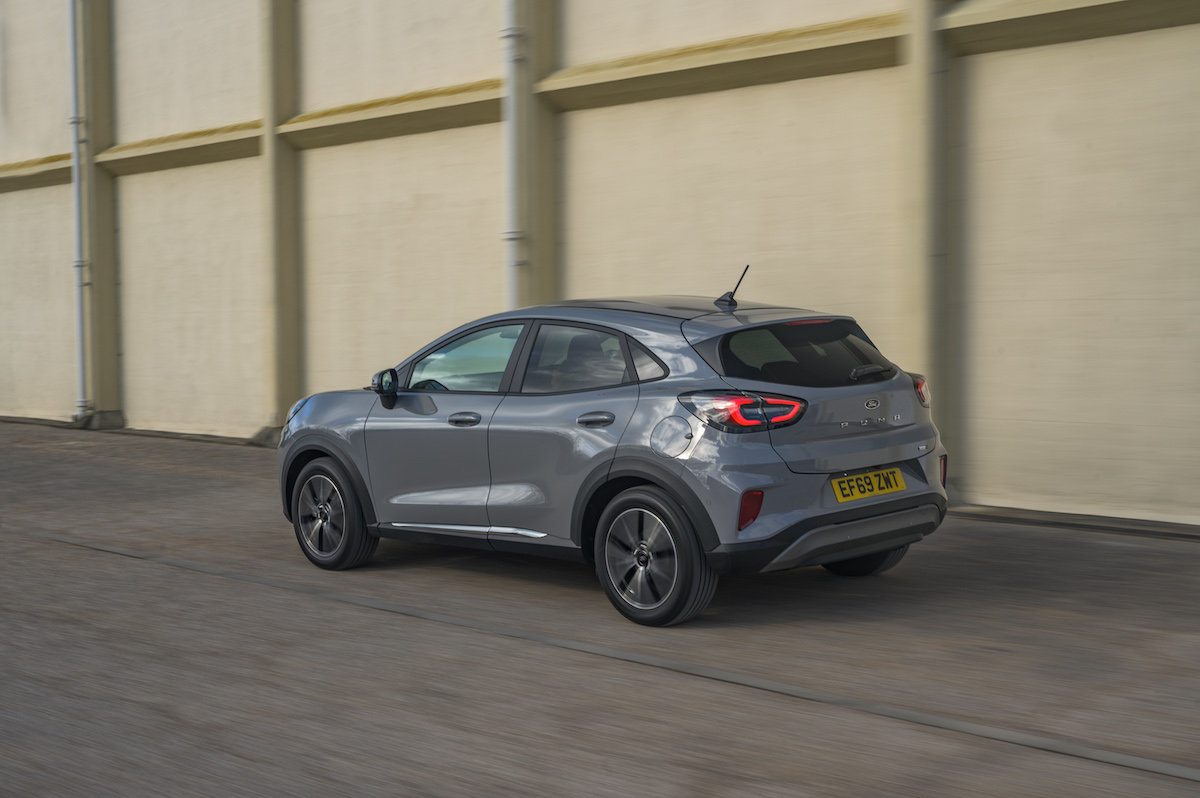 It might be bigger in every dimension, but the Puma’s still basically a Fiesta with an on-trend crossover body. That should translate to supermini-like running costs, which is a good thing. The engine choices – range-topping ST aside – don’t deny you fun for their parsimony, with fuel economy around the 49-50mpg mark in the WLTP combined fuel consumption testing schedule. CO2 emissions are between 96-101 g/km on the same testing cycle, those figures applicable to the manual six-speed gearbox. Pick the seven-speed automatic and fuel consumption will rise, marginally, likewise emissions, so if you’re buying it with company money, that’s worth considering.

To buy, it’s relatively inexpensive, especially as you really don’t need anything more than the Titanium entry-level model with the most economical 123bhp 1.0-litre EcoBoost MHEV powertrain. Servicing can be purchased optionally on a two- or three-year Ford Protect Service Plan, which covers regular service costs with an easy monthly payment, and also extends the Ford Assistance offering. There’s the option of the Ford Protect Service Plan Plus for higher mileage users, too, this upgrade bringing the benefits of the Protect Service Plan, but adding brake pads/shoes/discs, the clutch friction plate, shock absorbers, silencers (exhaust) wiper blades and bulbs into the mix, too.

Insuring it won’t be expensive, with the regular 1.0 EcoBoost models being in, maximum, group 20E. Consumables like tyres, brake pads and suchlike will all be inexpensive, too. Naturally, the range-topping ST model will cost a bit more to run due to its greater performance, but, again, it’s not going to punitively expensive to run, with fuel consumption in the region of 40mpg – if you’re not driving it like you’ll be inclined to – with CO2 emissions quoted as 155 g/km. All version are a long way under £40,000, so you’ll not pay any additional VED payments for the first five years of ownership, either. 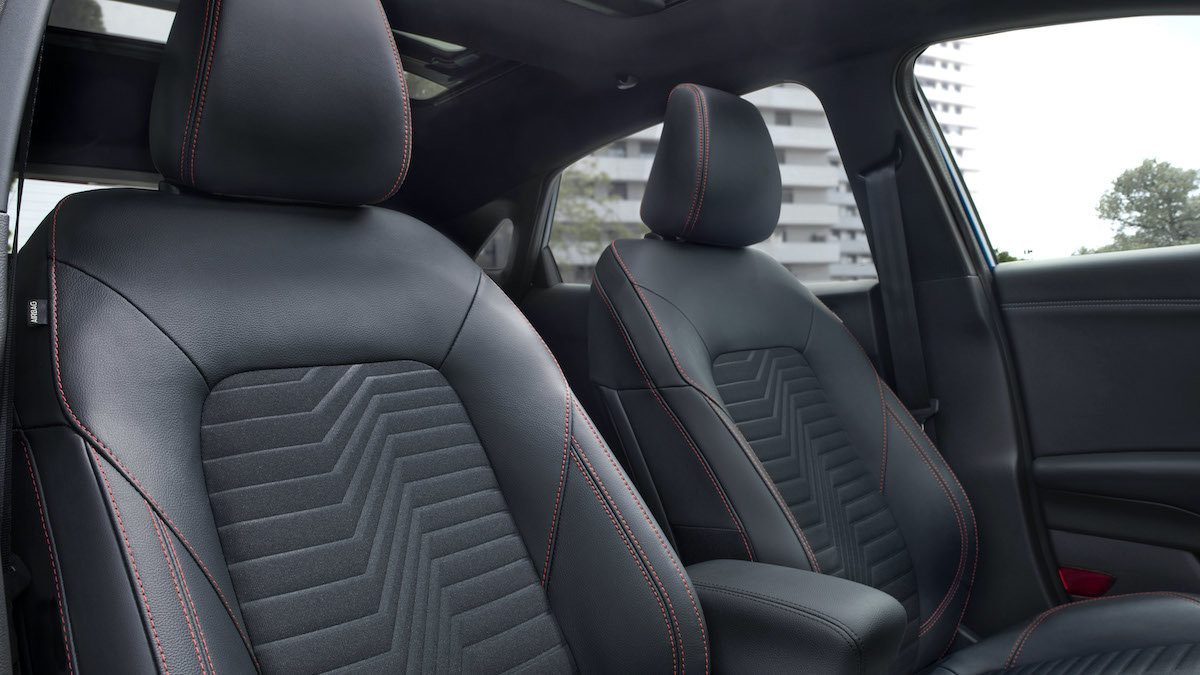 At the time of writing the Puma is a mere cub, at under a year old, so there’s no meaningful information relating to reliability. There have, inevitably, been a couple of recalls, but these common on all cars. The first relates to the hybrid battery connections, which could lead to a fire. Likewise, there has been a recall relating to the airbags, which may result in their protection function being impaired in the event of an accident. All of this should have been remedied already, but it’s always worth checking the registration of any potential purchase with Ford.

Ford doesn’t cover itself in glory in the reliability stakes, but then, it’s by no means the worst offender, typically scoring in the middle of manufacturer ratings, behind the usual Japanese bastions of reliability, and often ahead of some premium firms. The Fiesta remains a best-selling car, and it does at least do reasonably well in the numerous surveys we’ve scoured here, and the Puma is basically a Fiesta underneath.

There’s a three-year, 60,000-mile warranty, which looks a bit stingy these days, with Kia and Hyundai offering much more. And, while the interior might not have the material quality of something like a Volkswagen, it does feel like it’ll take the sort of abuse that family use will mete out on it. 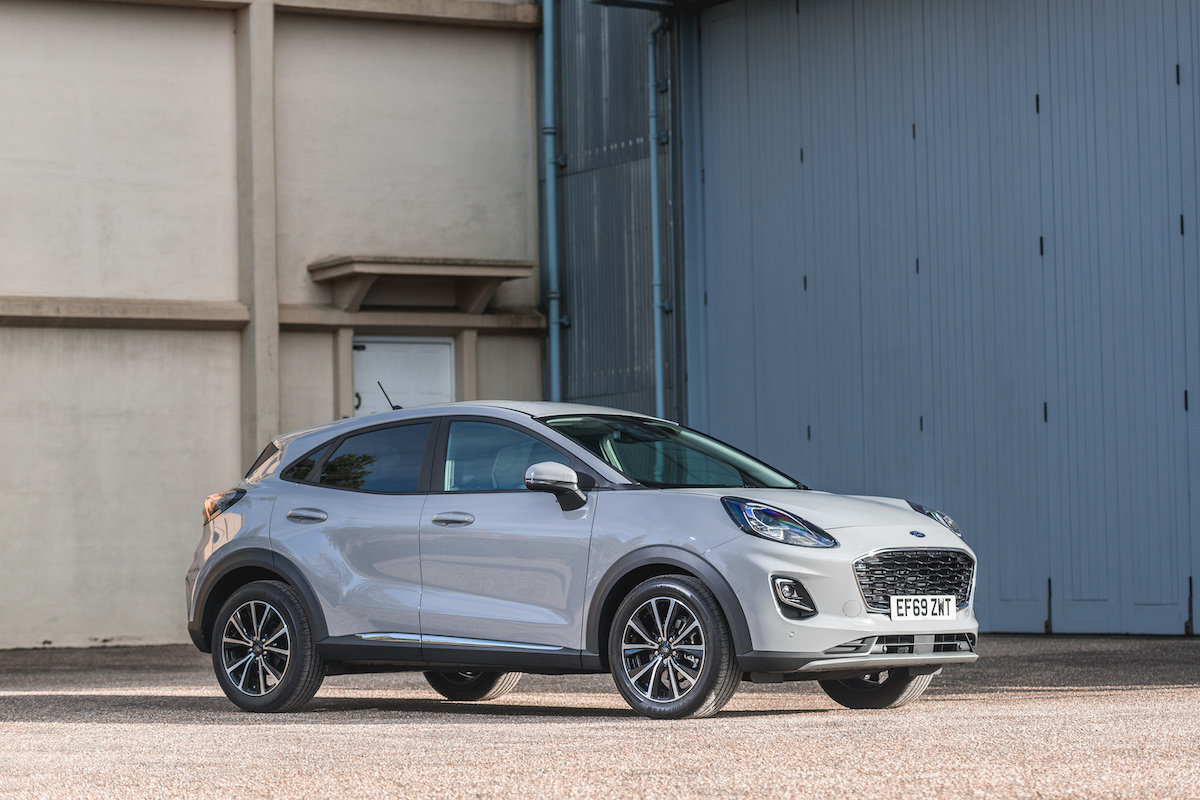 The Ford Puma is late to the compact crossover party, but it’s livened it up like someone dropping a banging tune on the sound system and cranking up the volume to 11. In a class that’s full of same-old, upright, uptight unimaginative crossovers, the Puma really is a breath of fresh air. Hugely fun to drive, even if that drive’s just the school run or daily grind to the office.Yet it's practical, too, coming with a big, usefully shaped boot, and that MegaBox (which we’ve yet to think of a real use for, but are certain it’ll become indispensable for its owners) is a draw, too. The rear seats are a little bit tight on headroom, but it’s forgivable here.

Add the generous equipment levels from that entry-level model, good looks, and the really rather impressive 1.0 MHEV EcoBoost engine, and the Puma is a very appealing, enjoyable all-rounder, too. The range-topper makes less sense, but that’s only because of the strength of the rest of the range below it, which is high praise indeed.

Search for a Ford Puma for sale on CarGurus.