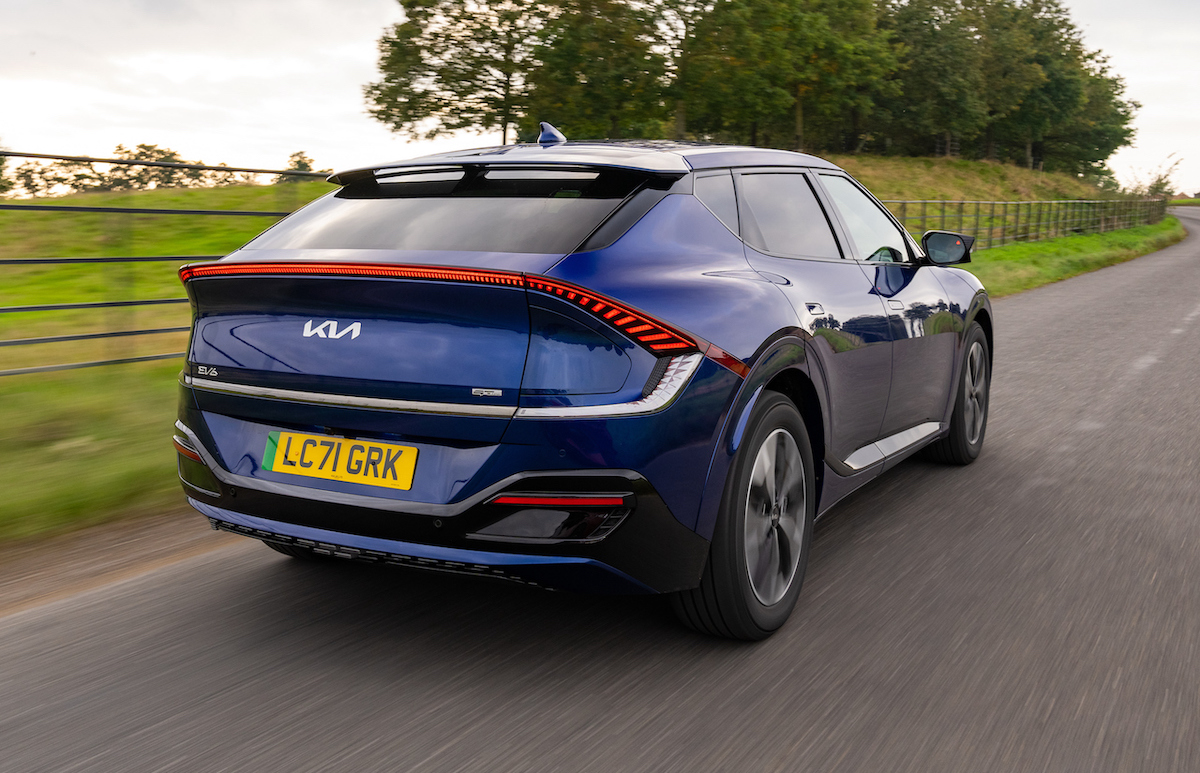 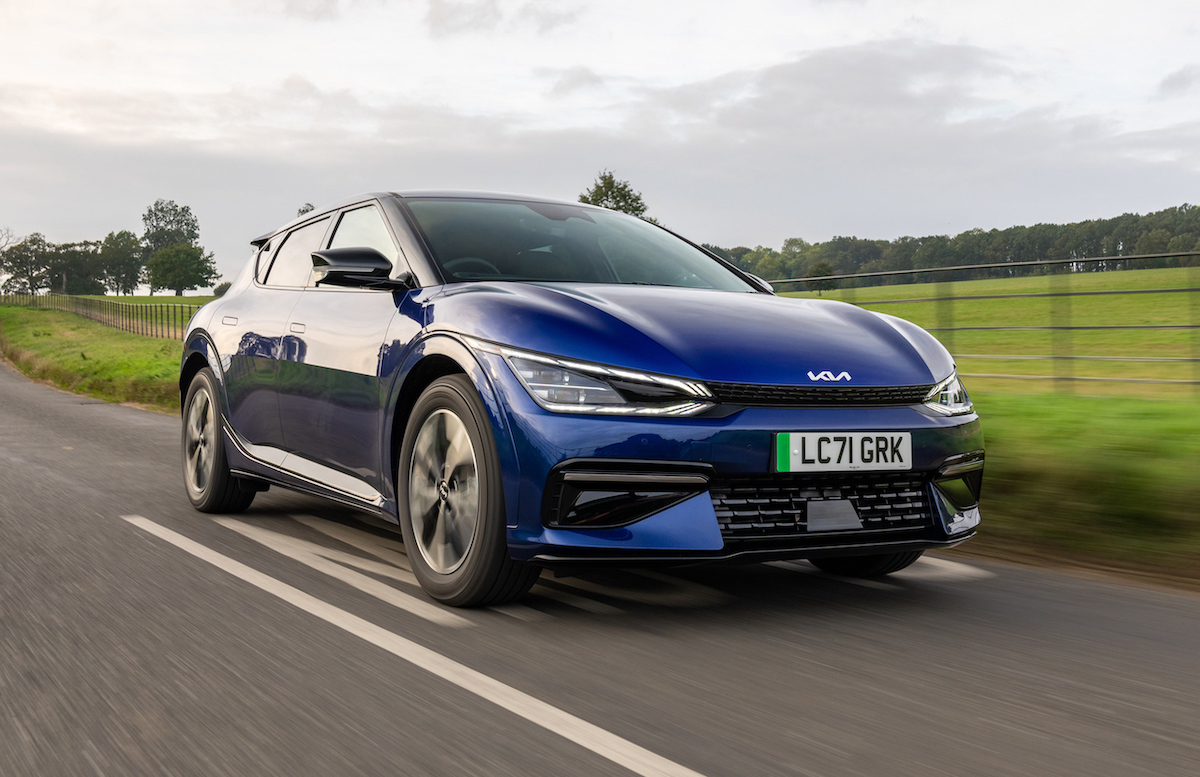 The Kia EV6 is a stylish, pure-electric executive hatchback that bridges the gap between traditional saloons like the Tesla Model 3 and more practical pure-electric hatchbacks and SUVs like the VW ID.4 and Ford Mustang Mach-E. It does a good job, too; it’s practical, classy and great to drive, and is sure to steal plenty of sales from more established executive cars, electric or otherwise. 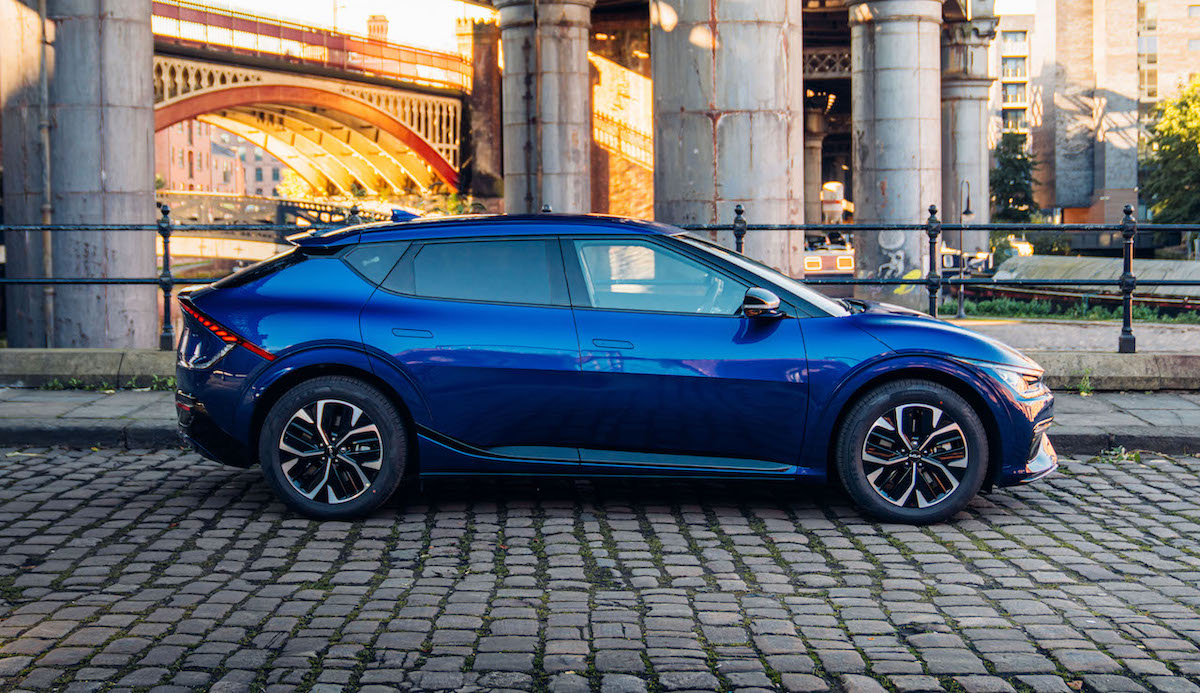 What is the Kia EV6?

The Kia EV6 is an interesting, pure-electric crossover vehicle that competes with everything from the Tesla Model 3 and BMW i4 to hatchbacks and SUVs like the Volkswagen ID.3 and ID.4, Ford Mustang Mach-E and even the Hyundai Ioniq 5, with which the Kia shares a platform. The Korean firm has pitched the EV6 as an executive crossover by giving it a classy finish, loads of equipment and long range of between 314 and 328 miles per battery charge, depending on whether you go for the high-powered all-wheel drive model or one of the slightly more efficient rear-wheel drive versions. That range is courtesy of a 77.4kWh battery (usable capacity) that lies along the Kia’s floor.

Charging in the Kia EV6 is about as fast as it gets. The Kia EV6 and Hyundai Ioniq 5 are the first non-premium brands to offer 800V ultra-fast charging, which means that they can take full advantage of the 350kW chargers that are beginning to spring up around the motorway network. Plug the Kia EV6 into one of these chargers and you’ll have an 80% full battery in 18 minutes. It’s compatible with any CCS rapid charger as well, so plugging into a 150kW or 50kW charger will get you a 100-mile top-up in around 20 minutes or 45 minutes, respectively.

The Kia EV6 is true ‘crossover’ in that it's a great family hatchback, and a brilliant executive express. Thanks to the electric vehicle-specific 'e-gmp' mechanical platform that it sits on, which has the wheels at the extreme corners of the car for a super-long wheelbase, there’s masses of space up front and in the back. There’s not quite as much space and flexibility as you get in the Hyundai Ioniq 5 and Skoda Enyaq iV, but there is way more headroom and legroom in the back than you get in the likes of a BMW 3 Series. The totally flat floor also means that there's plenty of foot room, even for someone sat in the middle of the rear seats. The 490-litre boot is a good size, complete with underfloor cable storage, rear seats that split 60/40 and fold flat, and there’s even a further 52 litres of space under the bonnet.

The subwoofer that you get in high-spec GT Line S models eats into boot space a little – albeit only by 10 litres – and there are ‘proper’ electric SUV rivals like the Ford Mustang Mach-E, Skoda Enyaq iV and Tesla Model Y that have usefully bigger, more usable boot space. Even so, you’ll get a chunky pushchair in the back of the Kia easily, and with the storage up front and various big cubbies around the cabin, this is still a really versatile family car.

You can also tow up to 1,600kg with the Kia EV6, which isn’t bad by electric-car standards and also means that you can have a towbar fitted, which is useful for bike racks.

Very good indeed, certainly better than the bigger, more top-heavy Hyundai Ioniq 5, and there’s even a bit more to the Kia EV6’s driving experience than the Tesla Model 3's. The rear-wheel drive Kia EV6 gets 226bhp from its single electric motor, which delivers a 0-62mph time of 7.3 seconds, and you don’t need any more performance than this in the real world. It’s more than punchy enough to make light work of a fun country road or rapid motorway merge; there’s certainly nothing ‘entry-level’ about the way this cheaper RWD EV6 version drives.

The four-wheel drive model does have a serious performance edge to it, with 321bhp streaming from dual motors and firing it up to 62mph at 5.2 seconds. That’s proper sports car pace, and it’ll have you grinning away even on a mundane road. That four-wheel drive also brings an aspect of all-weather peace-of-mind that’s likely to make it one of the more popular options in the range. That’s not even the fastest EV6 – a monster 577bhp ‘EV6 GT’ is joining the range from 2022 with a 0-62mph time of 3.5 seconds, just in case you had any doubts as to whether Kia is going to compete with the Tesla Model 3 Performance or the Porsche Taycan.

Our big complaint with the EV6 is that its steering could be more engaging. It’s lovely and confidence-inspiring on the motorway and around town, but it’s a little unpredictable in the way it weights up as you wind lock on in faster corners (regardless of which drive mode you’re in) and it’s not got the level of feedback that you might expect from a car purporting to be a sports executive car.

Still, the ride comfort and refinement are great. Even on bigger wheels the Kia EV6 is still supple enough to shrug off scruffy city roads with relative ease, although there’s a bit of choppiness over big bumps. There’s not much whine from the electric motor at low speeds, and wind noise is also kept to a minimum, so this is also a fantastic motorway cruiser.

There are all the gadgets and luxuries in the Kia EV6 that you’d expect in an executive electric car. Every EV6 gets two curved, 12.3-inch screens – one touchscreen in the centre to control most functions from, and another in front of the driver to function as an instrument readout, with various views and layouts on offer. A row of touch-sensitive buttons beneath the main touchscreen infotainment system doubles up as climate control switches, or at the touch of a button the panel changes to offer shortcut buttons to the main functions, such as satnav and media. That works well, although it’s a faff to have to find the fairly small icon that you need to prod to change the control bar from one to another.

The touchscreen itself is very good. The graphics and screen response aren't quite what's offered in, say, the BMW i4, but it’s still easy to use thanks to logical menu layouts and a full suite of functions. Those include satnav, Android Auto, wireless Apple CarPlay, digital radio and Bluetooth.

Top spec GT Line S adds a 360-degree camera, an upgraded, 14-speaker sound system, heated rear seats, sunroof, powered tailgate and an augmented reality head-up display. This beams a moving arrow onto the windscreen in front of you, to point in real time at the road you need to take according to the nav. There’s also a blind-spot view function that beams a camera view of the side of the car when you indicate, making it easier to see any cyclists that may be hidden in your rear three-quarters. 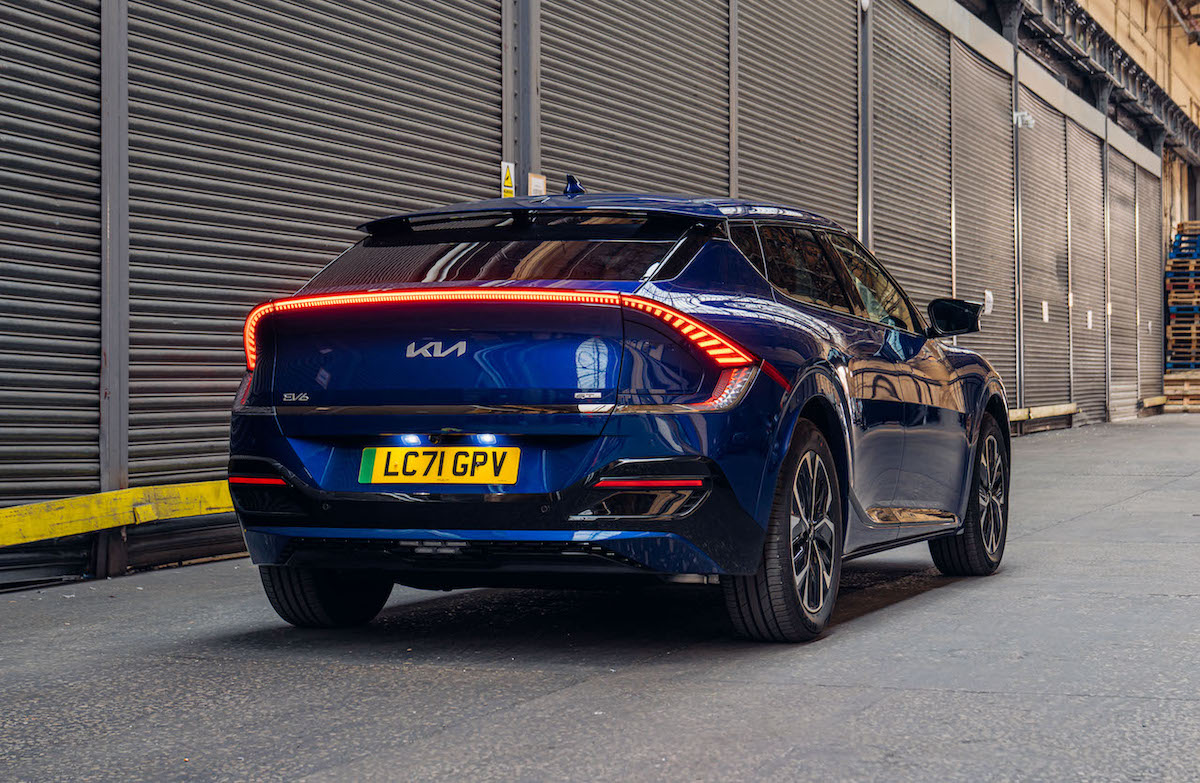 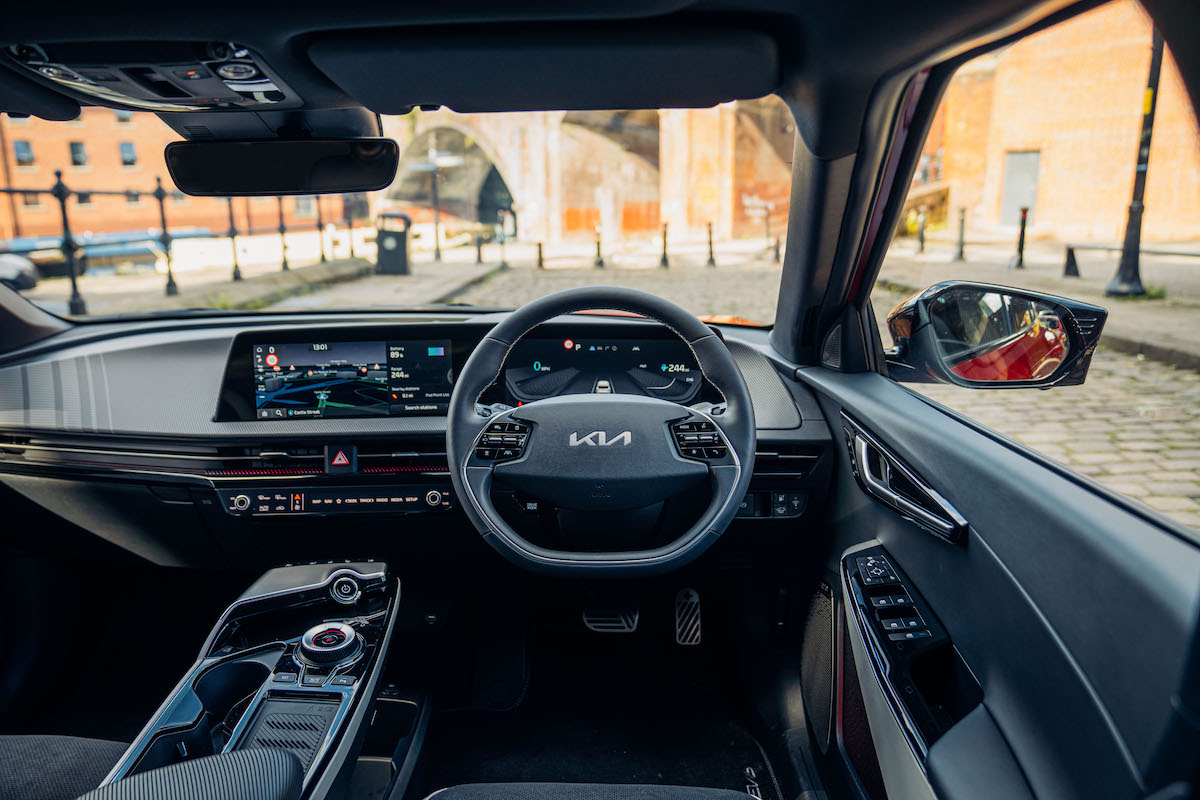 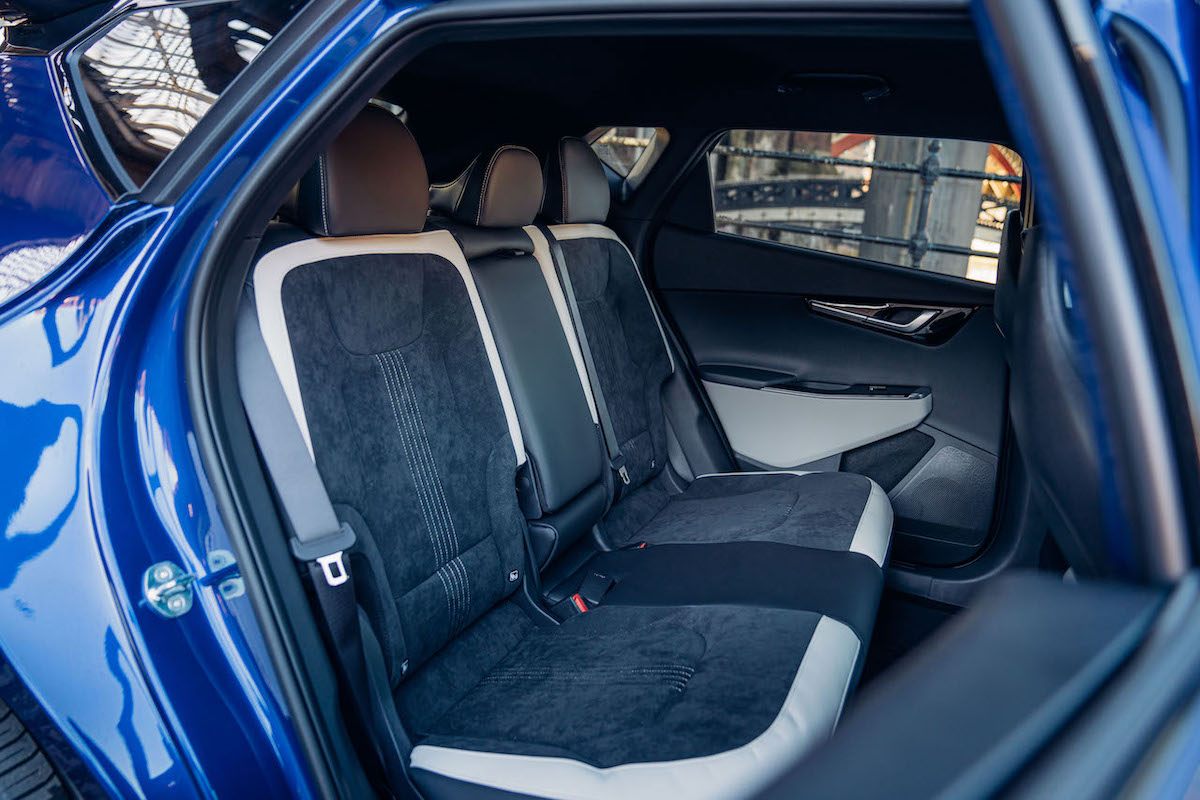 The Kia EV6 will be much cheaper to run than any equivalent petrol, diesel or even plug-in hybrid alternative, such as the BMW 3 Series or Audi A5 Sportback, because electricity is cheaper than petrol or diesel. A full charge in the Kia EV6 will cost roughly £11 on a typical domestic electricity tariff, or you get it much cheaper still if you take advantage of off-peak tariffs. You can do this easily, thanks to a phone app that allows remote control of charging times, pre-setting of cabin temperatures and more. Even without off-peak tariffs, it works out at around 5p per mile for electricity in the EV6, compared with some 15–20p per mile in an efficient petrol or diesel car.

If you do buy your Kia EV6 outright, the depreciation is likely to be very gradual, since demand for used electric cars is high and Kia has established itself as one of the most desirable EV manufacturers. Insurance costs are competitive, falling into groups 33 to 45; similar to the Ford Mustang Mach-E but usefully lower than those of the Tesla Model 3. 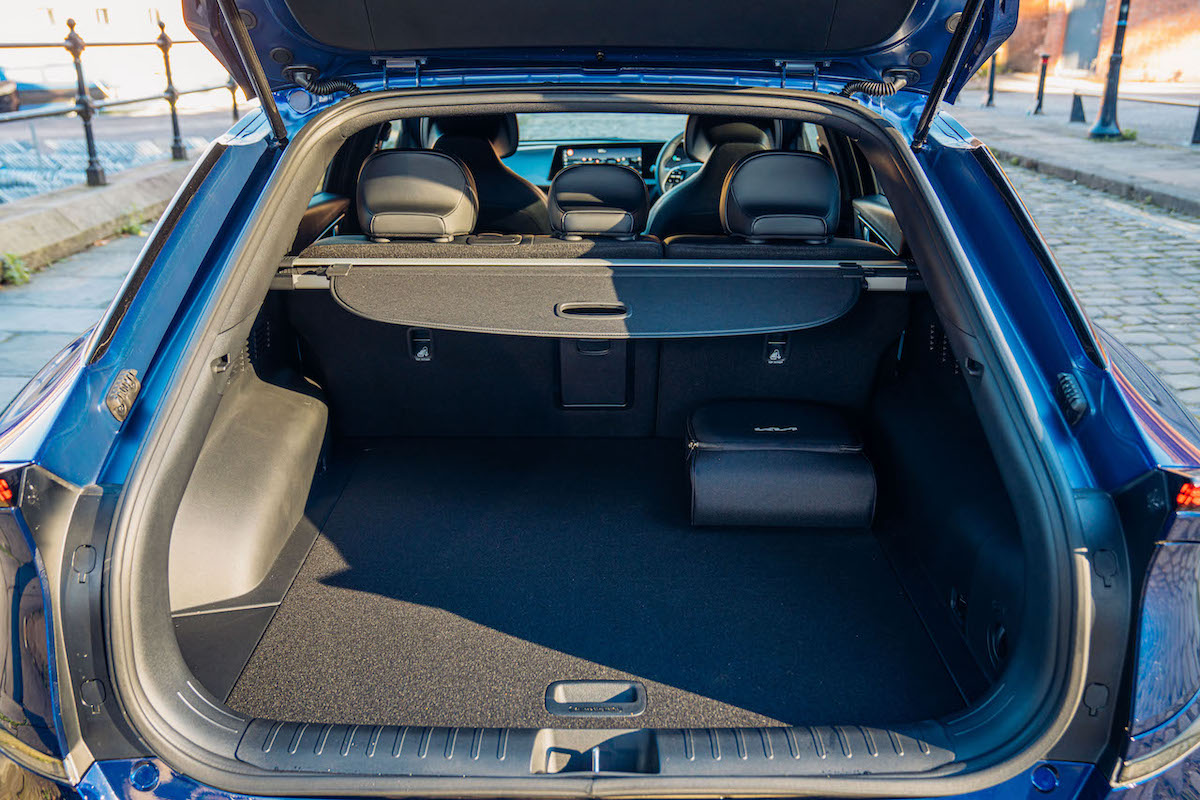 The Kia EV6 is too new to have been involved in any of the usual owner surveys, but with the brand already well established in electric-car manufacturing with the excellent Kia e-Niro and Kia Soul EV, its EVs have a reputation for being very reliable. That’s backed up by the brand finishing in 9th place overall in the 2021 What Car? used car reliability survey, and a 2nd place finish in the 2021 Driver Power survey.

Battery degradation is a concern for many prospective EV buyers, but data is showing that modern lithium-ion car batteries are lasting longer than expected. It’s realistic to expect to lose around 10–15% of the car’s maximum driving range over the first 100,000 miles or 10 years, and if you look after the battery well then you may lose less than that. Try to run it between 20-80% charge in routine daily use (you can set a maximum charge via the car’s touchscreen), and only charge it fully when you need the full range. Also try to avoid rapid charging more often than is necessary.

The Kia EV6 comes with an impressive seven-year, 100,000-mile warranty, which covers the high voltage battery as well as the car itself. 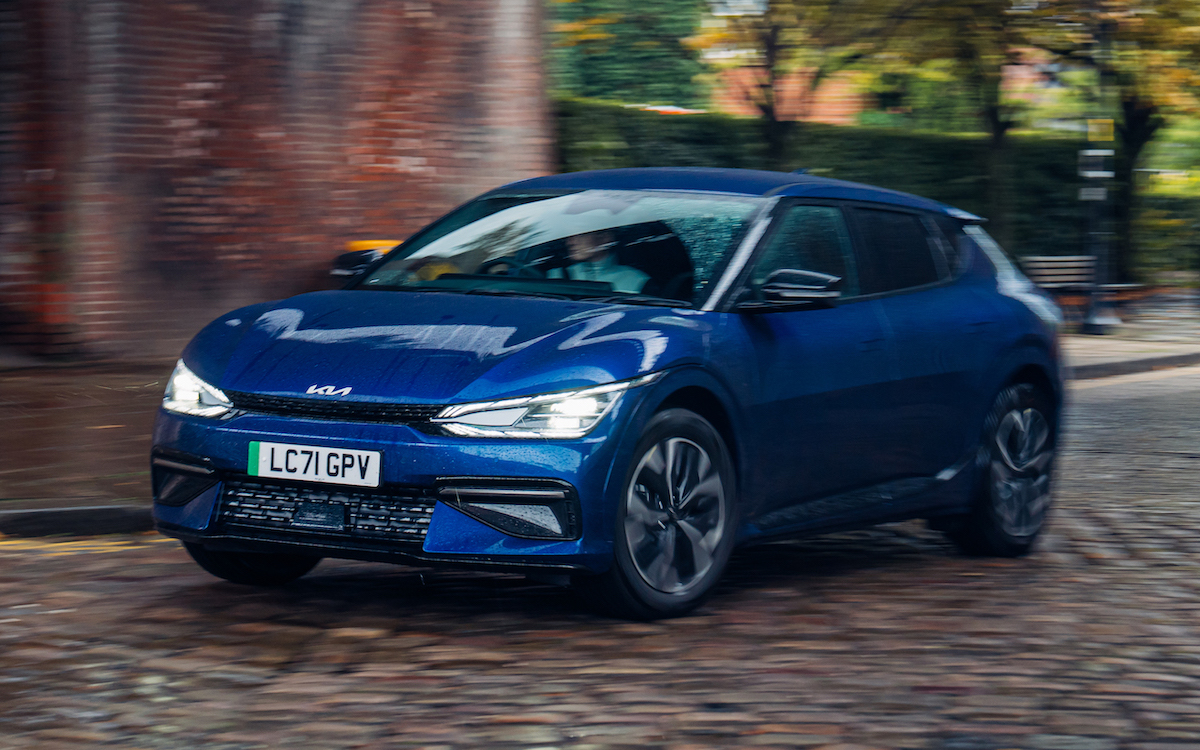 The Kia EV6 is one of our favourite electric cars. It’s a fantastic blend of executive luxury and performance, sensible family car roominess and hi-tech gadgetry. If interior space and versatility are priorities then there are better options, including the cheaper Skoda Enyaq iV and Hyundai Ioniq 5, but the Kia EV6 is very roomy and practical, especially for a car that’s usefully more compact than full-size SUV alternatives like the Skoda and Ford Mustang Mach-E. We’d like more engaging steering and better finance deals, but other than that there’s very little to complain about on the brilliant EV6.

Search for a Kia EV6 for sale on CarGurus