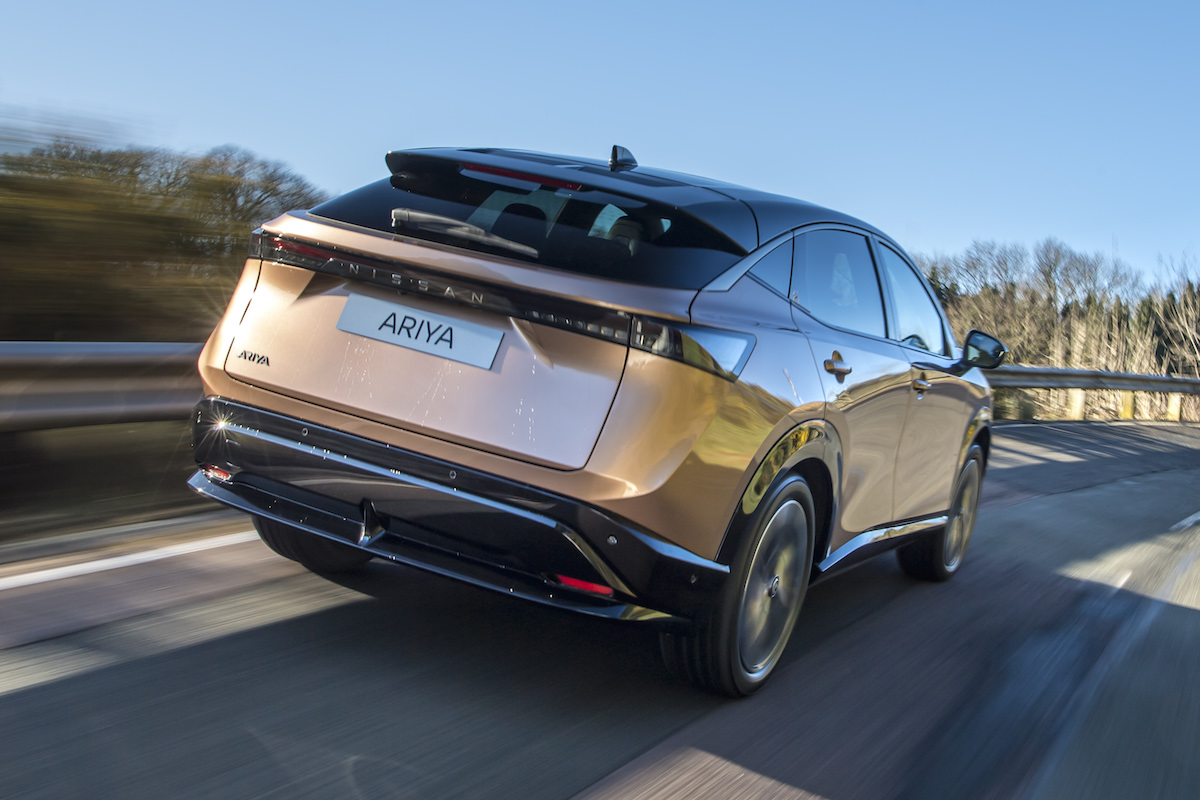 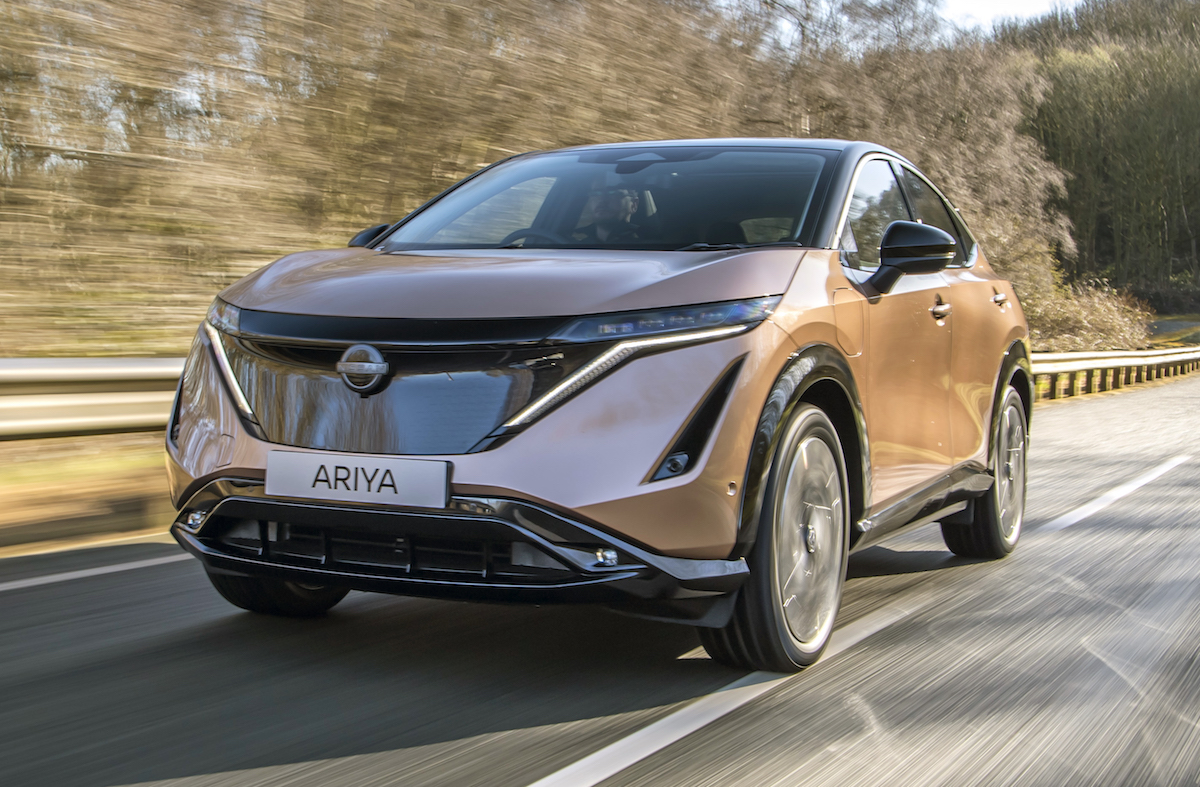 The new Nissan Ariya is a pure electric SUV that offers five seats, a variety of front- or all-wheel drive powertrains, and two battery sizes delivering between 223 miles and 310 miles. It’s a very modern, smart, hi-tech car with minimalist design all round and decent performance, and is a direct rival in the increasingly busy electric family SUV class. 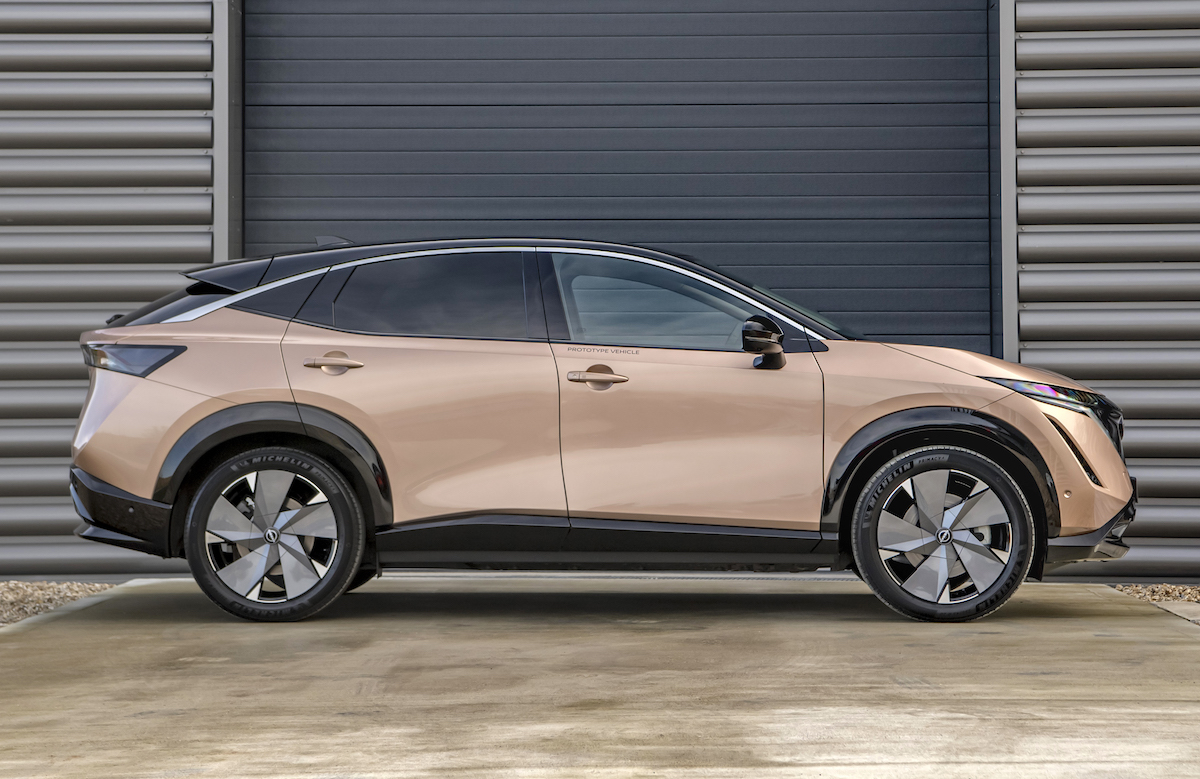 What is the Nissan Ariya?

The Nissan Ariya is an electric SUV that’s a touch longer than a Nissan Qashqai but slightly shorter than the Nissan X-Trail. It is only due to be offered with five seats, so no seven-seater planned as yet. It’s a more style-focussed offering than most other Nissan models, too, with the Nissan Ariya’s SUV-Coupe crossover silhouette and bold, shark-like fascia giving it a distinctive, upmarket appearance that’s likely to trickle into future Nissan models.

You can choose from a variety of two-wheel drive or four-wheel drive models, and there are two lithium-ion battery options – 63kWh or 87kWh – offering an official WLTP combined driving range of between 223- and 310 miles. Prices start from around £42,000 for the entry level, 63kWh Advance model and stretch up to nearly £60,000 for the high performance model, the four-wheel drive Nissan Ariya ‘e-4orce’ with its 87kWh battery pack.

Just as practical as rivals like the Ford Mustang Mach-E and VW ID.4, which is to say that it’s very practical indeed. The boot is bigger in the front-wheel drive variants – 466 litres compared with 408 litres - but there’s plenty of room in the deep boot space for a chunky buggy or large dog, so any Nissan Ariya model will suit family life very well. The three-person rear bench offers masses of leg- and headroom, and the flat floor means that even someone sat in the middle will have plenty of space for their feet.

It's very comfortable up front, too, even for very tall people. The seats are broadly adjustable and comfortable, and the cabin feels upmarket, a good deal more premium than the interior of the Nissan Qashqai, for instance, so don’t go thinking that this is ‘just’ an electric Qashqai. Nissan clearly has ambitions to nibble away at Audi, BMW, Mercedes and Volvo sales with the Ariya, which has a very minimalist interior that’s dominated by a wood finish. This gives it something of the boutique, Scandi-design feel that Volvo has perfected, and is complete with touch-sensitive buttons on the wood panels that are invisible until the car is turned on.

They’re not quite as intuitive to use - or as easy to push - as traditional physical buttons but they do look brilliant and compliment the slick, hi-tech interior.

Very slick, but not the smoothest riding, nor the most involving option in the class.

We drove a prototype of the entry-level front-wheel drive 63kWh battery car, which gets 214bhp and can accelerate from 0-62mph in 7.5sec. If you want greater performance than that, you could always look to the Ariya e-4orce, which produces 302bhp from its dual electric motors, allowing it to fire past 62mph in 5.7sec, although we’re yet to drive it.

Naturally, you get the continuous, uninterrupted power delivery that characterises a pure electric powertrain, which makes the Nissan Ariya feel smooth and predictable from the off. The easy-to-modulate brake feel helps with that, and you can opt to increase the brake regeneration up to full ‘e-pedal’ mode that means the car slows down strongly enough as you lift off the throttle that you likely won’t need the brake pedal at all when you’re driving around town. This one-pedal EV experience was something Nissan pioneered on the Leaf. The regenerative braking harnesses energy that would otherwise be lost in deceleration, and uses it to top up the battery to eke out a few more miles of range.

Out on faster roads, the acceleration that this lowest powered Ariya delivers is more than good enough for hearty progress on a rural road, or confident merging in fast motorway traffic. However, the steering is light and a little unpredictable in brisk cornering, and while there’s an appealingly easy-going confidence to the way the Ariya handles itself, the Ford Mustang Mach-E and Tesla Model Y are faster and more enjoyable to drive, and even the Skoda Enyaq iV steers more fluidly.

It’s also a shame that the Ariya’s ride is rather firm. Our test car was a pre-production car, and there could still be some tweaks to be made before the Ariya goes into full production, but it’s quite choppy over high-frequency road surfaces, and thumps heavily into potholes. Having said that, the ride on the Ariya is still better than that of the Tesla Model Y so it likely won’t be a deal-breaker. Do check out the Skoda Enyaq iV if you want a cushier, more relaxed electric family SUV, though.

The Nissan Ariya has all the driver aids and media features that you’d want. Even the entry-level Nissan Ariya Advance gets the ‘ProPilot’ semi-autonomous drive mode, adaptive cruise control, autonomous emergency braking around town, 360-degree parking camera, heated seats, and a heat pump for more efficient running in the winter. Two 12.3-inch screens dominate the dashboard, with the central touchscreen infotainment including Apple CarPlay and Android Auto as well as satnav. Over-the-air software updates are standard, too.

You also get Amazon Alexa voice control on the Nissan Ariya, which is about as good as any voice control system in a car, albeit the background noise that’s inevitable in a moving vehicle (even a pure electric one that’s as refined as the Ariya) still confuses the system.

The touchscreen itself is fairly straightforward to use, but the graphics aren’t quite as good as those in the Tesla Model Y, Kia EV6, Audi Q4 e-tron or Skoda Enyaq iV. 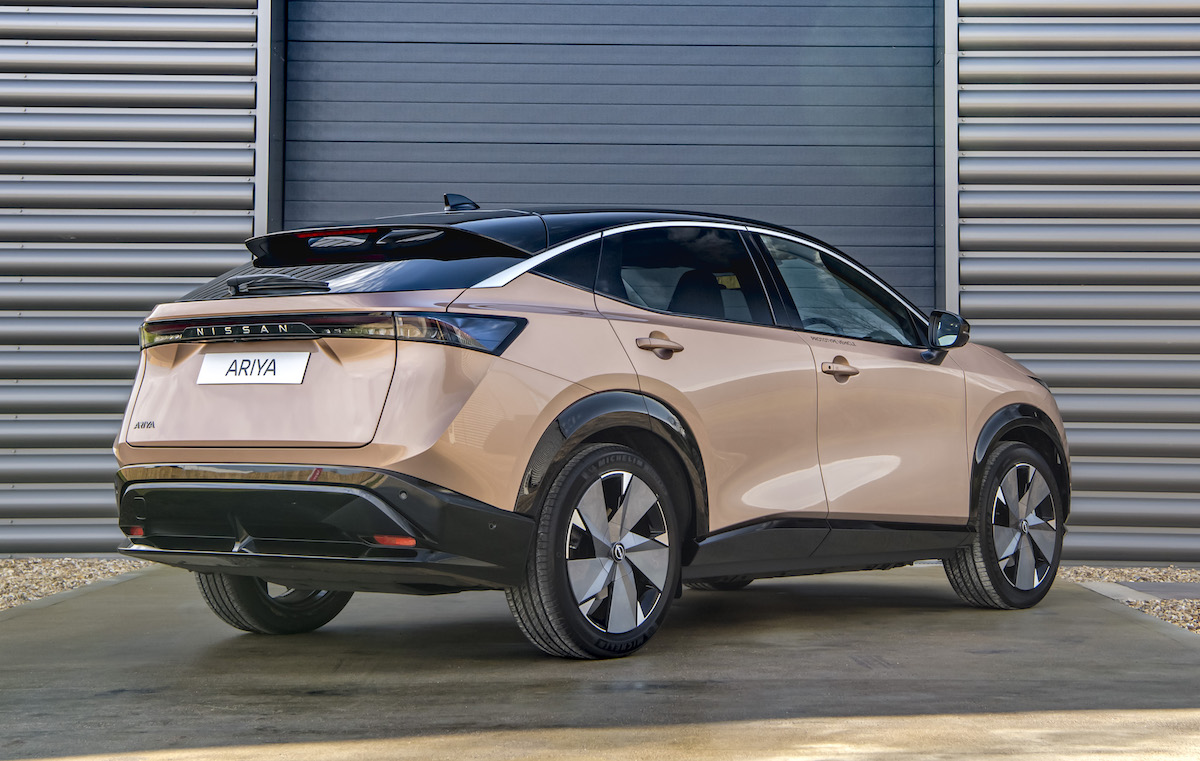 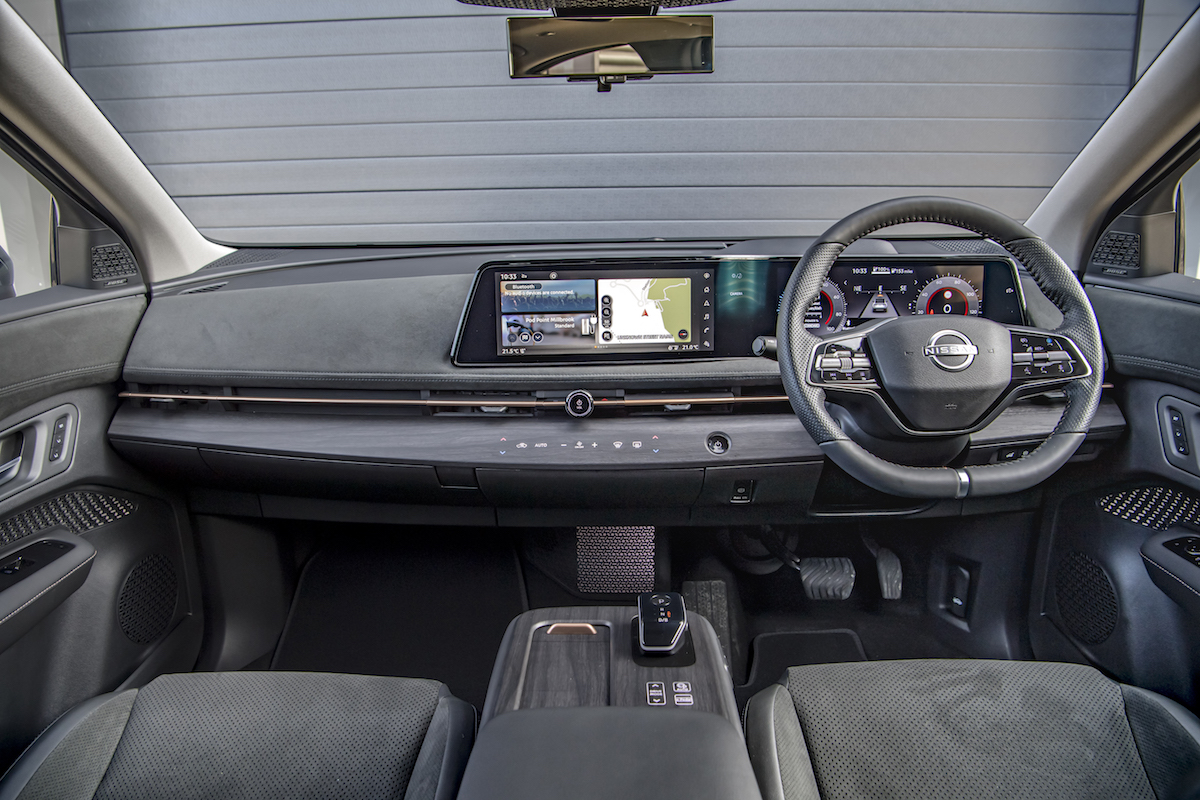 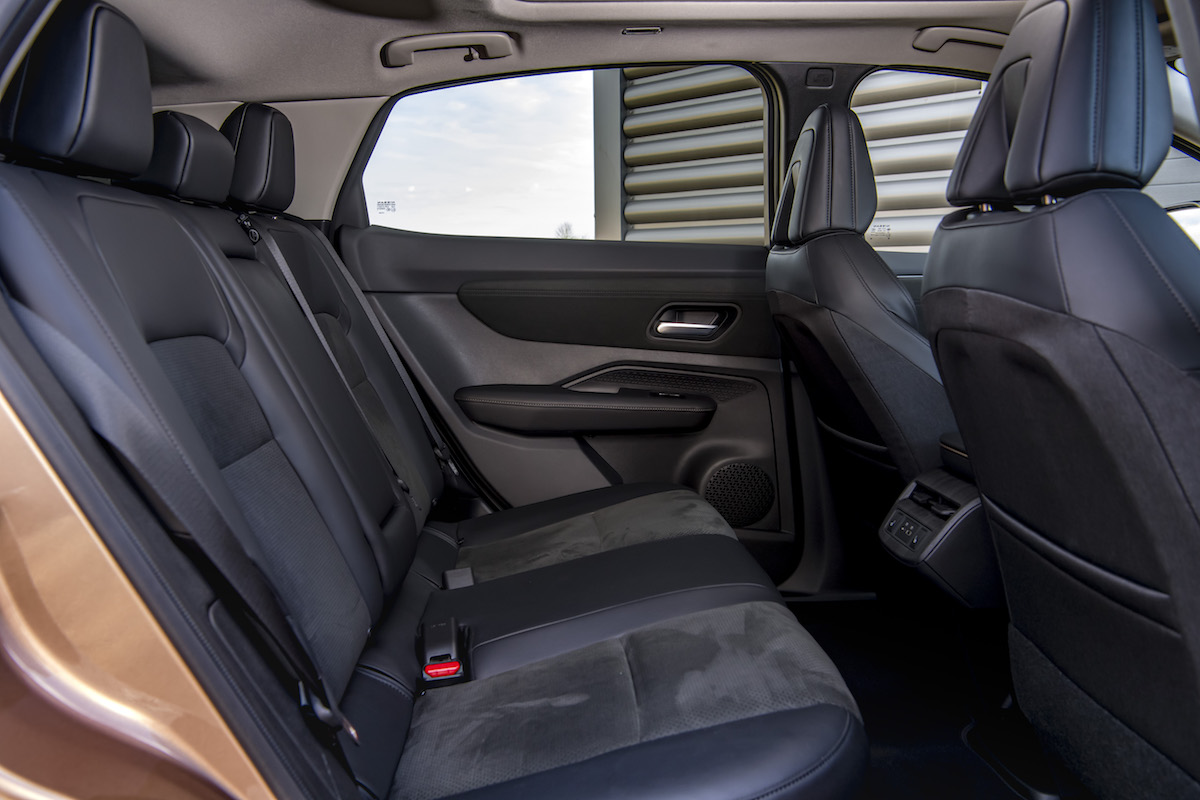 The Nissan Ariya isn’t the cheapest electric family SUV you can buy, but it’s similarly priced with most rivals, including the Ford Mustang Mach-E and Kia EV6.

It’ll cost around £18 to fully charge the 67kWh Nissan Ariya on a standard domestic home tariff priced at 28p per kWh, while the bigger 87kWh car will cost more like £24, but you can still get cheap overnight tariffs that’ll allow you to cut those costs by as much as 75%. Even if you don’t use cheap off-peak electricity, the Nissan will cost around 7-8p per mile, which is roughly half of what it costs to fuel a petrol or diesel car.

Residual values are expected to be good, too, so overall the Ariya promises to be competitive in terms of its ownership costs. 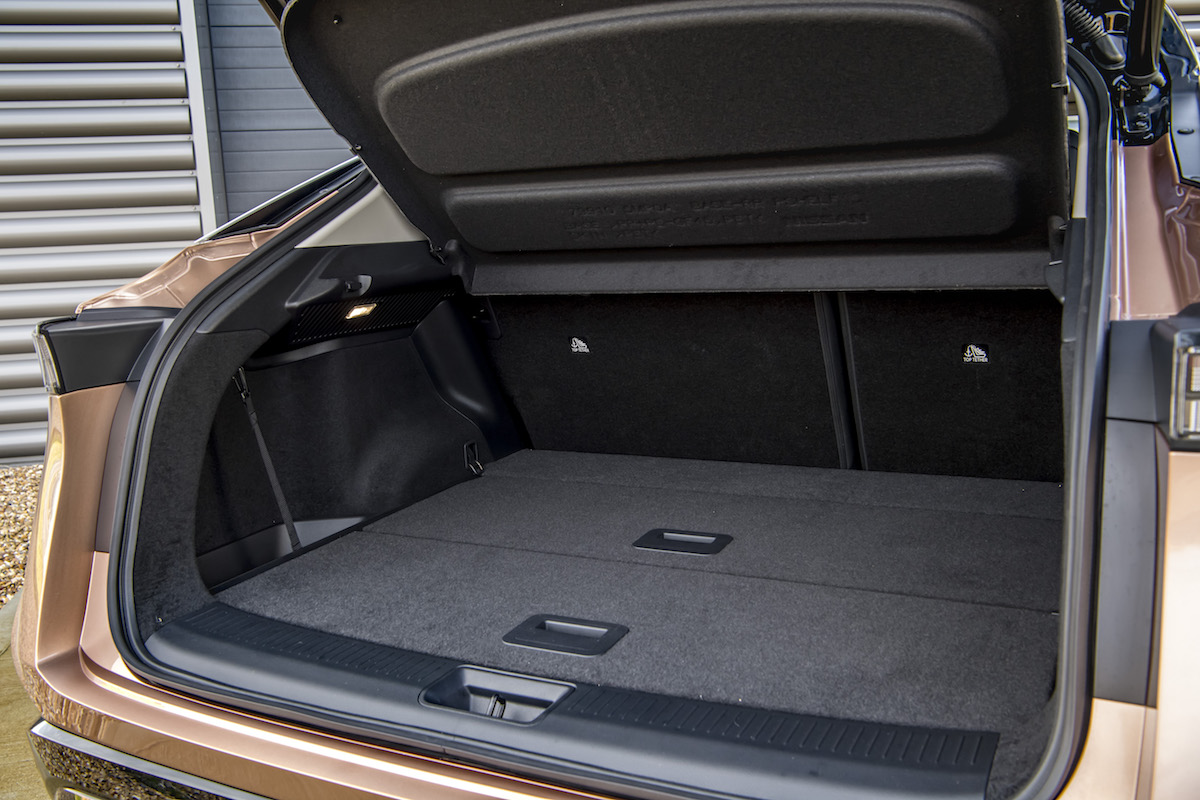 The Nissan Ariya is too new for any reliability data or owner surveys, but electric cars are statistically more reliable than petrol or diesel thanks to the simplicity and minimal moving parts involved in electric motors. It also comes with a warranty valid for three years or 60,000 miles, while the high voltage battery is covered for eight years and 100,000 miles.

As an overall brand, Nissan fared poorly in the 2021 What Car? Used Car Reliability Survey, coming 27th out of 30 brands. It wasn’t quite such bad news in the Driver Power survey (which rates new car reliability as well as overall ownership satisfaction), but Nissan still came a middling 18th out of 29 brands rated. 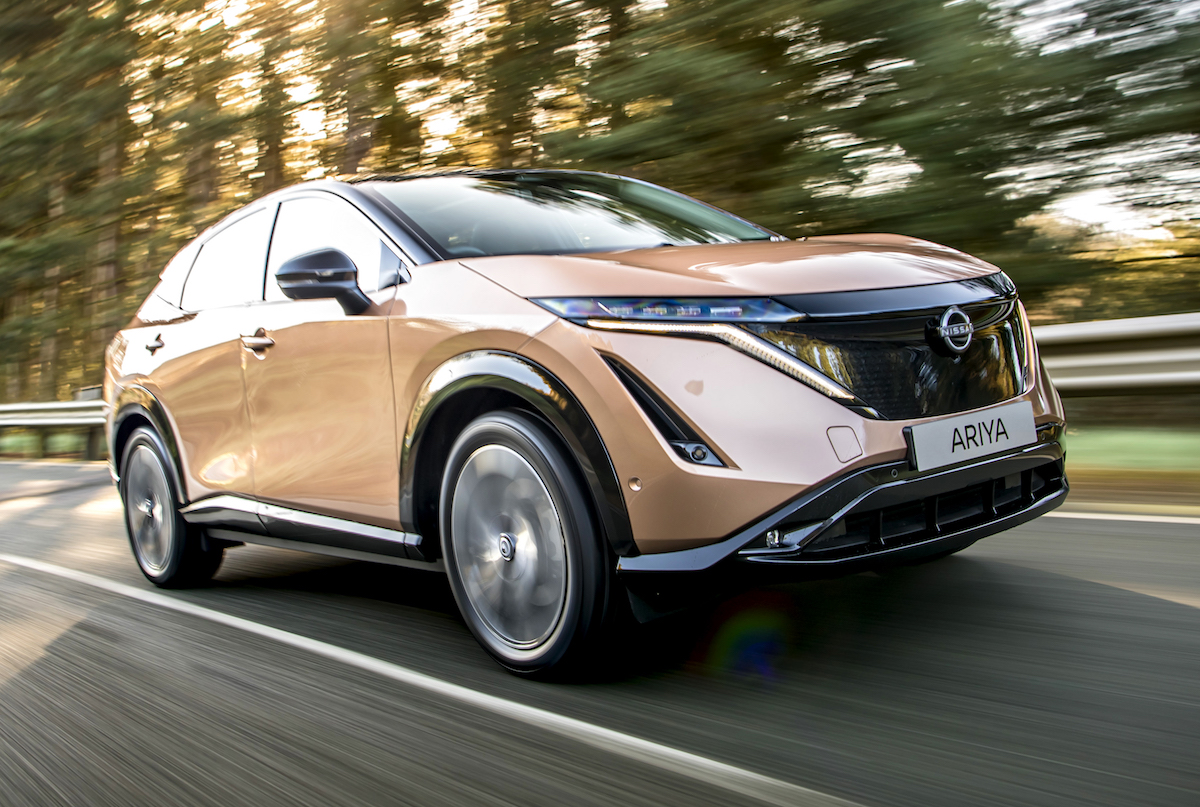 The Nissan Ariya is a bold, appealing car that’s competitive in all the key areas including driving range, practicality and quality. It’s also one of the classier interiors of the many not-quite-premium electric SUVs that it competes with. Ride comfort could be an issue, and there are rivals that are more fun to drive including the Kia EV6, never mind the excellent Jaguar I-Pace. The Skoda Enyaq iV is also more comfortable, similarly practical and – while more conventional and not as swish inside – usefully cheaper, and the Ford Mustang Mach-E has a longer range.

So, the Nissan Ariya isn’t without significant competition, and it does feel a little like it’s lacking a particular unique selling point in an increasingly tough class. For all that, the style, high standard equipment levels, a marque that people trust for being well established in EVs and a seriously impressive interior still make this a compelling and recommendable family SUV.