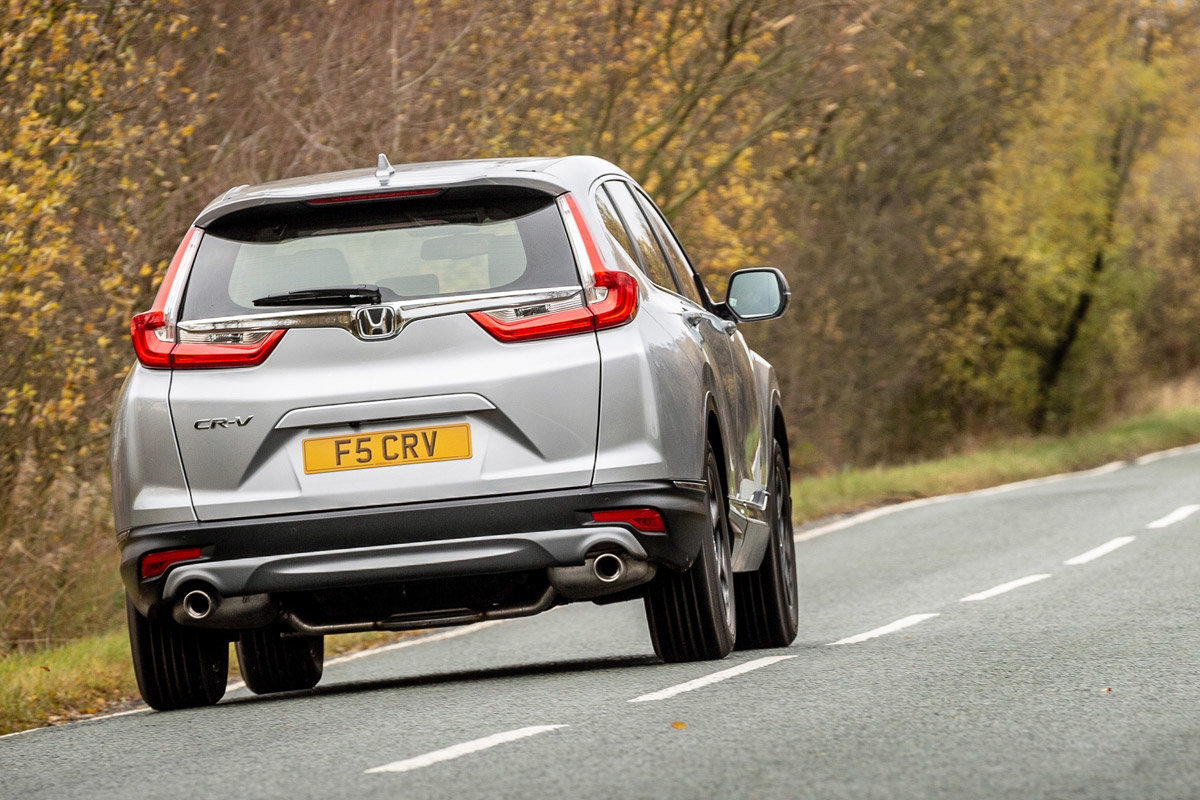 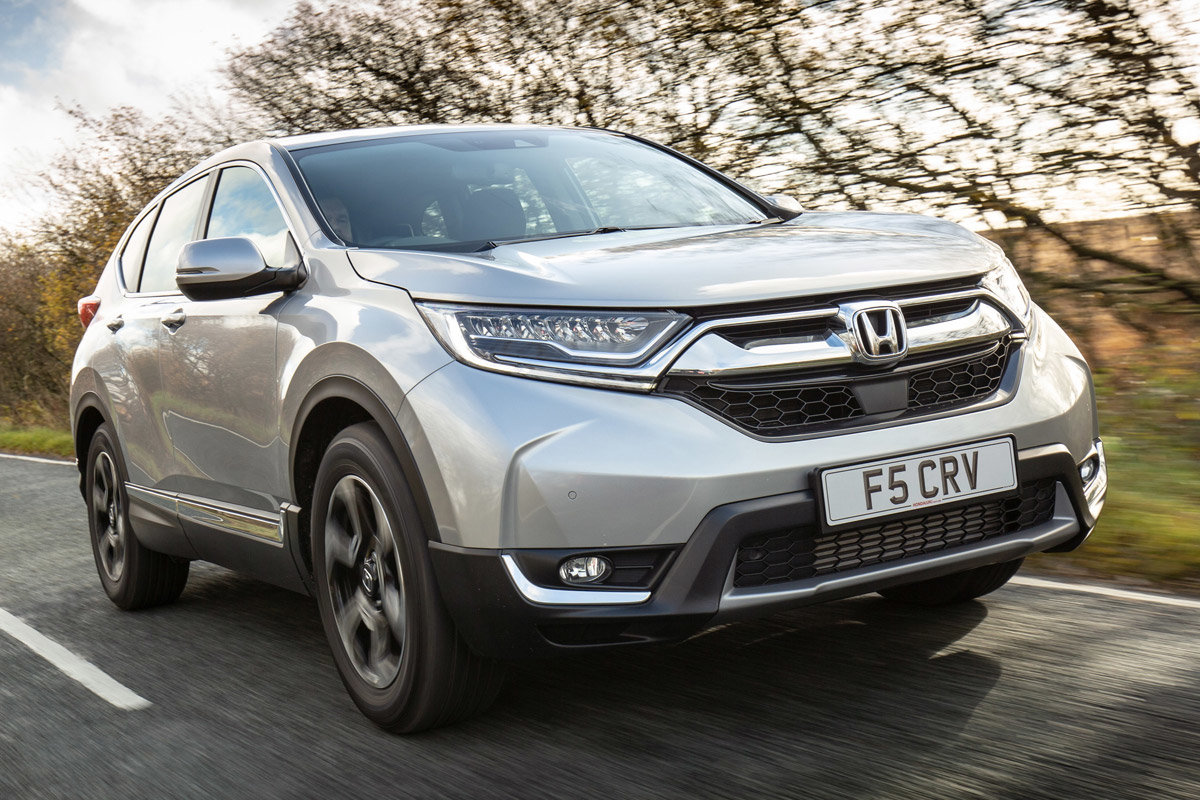 If you want a practical family SUV, Honda’s fifth-generation CR-V is a sound candidate. It’s not all that exciting or interesting but it is capable, good to drive and comes with lots of kit. Issues such as a clunky infotainment system do blunt its appeal, but decent reliability, sensible running costs, seven-seat models and a frugal five-seat hybrid version make it worth considering. 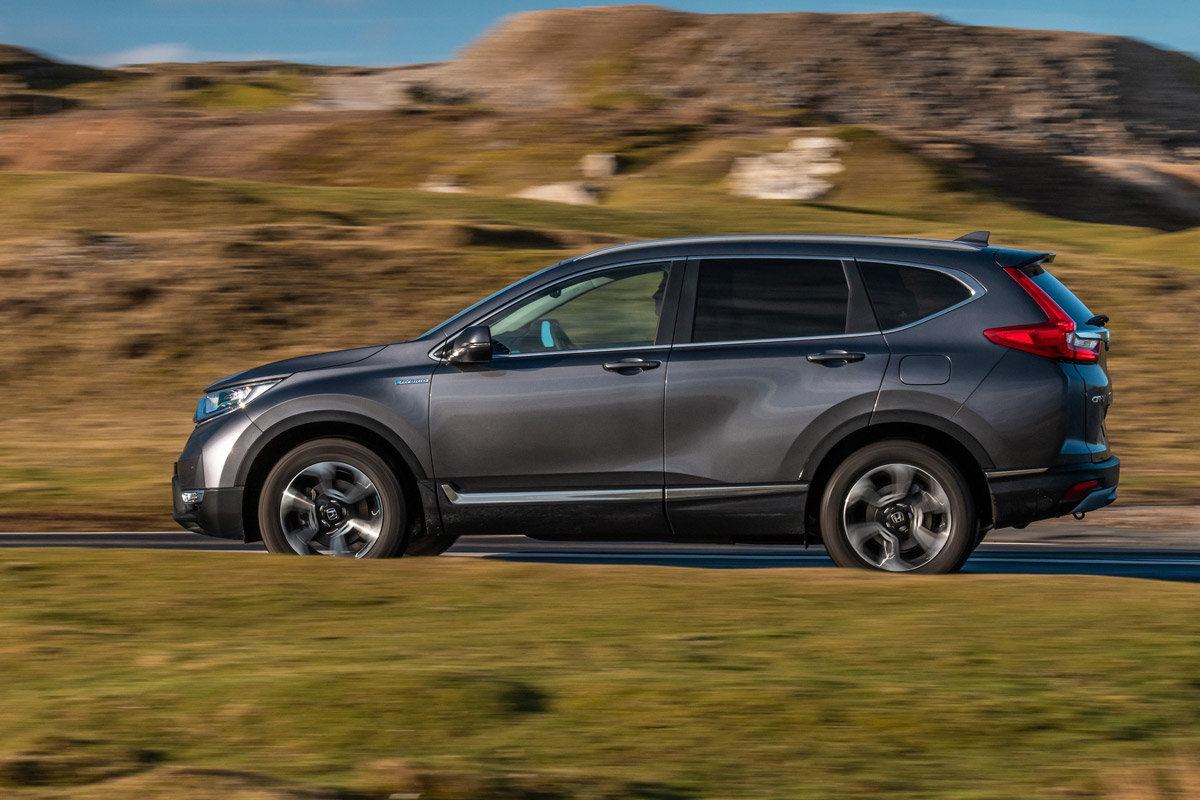 What is the Honda CR-V?

Overall, the Honda offers a lot that makes it an appealing and sensible choice for those after a practical, safe and relaxing family SUV. It’s not a stand-out option, though, as the competition is so competitive in this sector. A Skoda Kodiaq, for comparison, has a slightly lower starting price, a wider array of refined engines and the option of a dual-clutch automatic, which is more enjoyable to use than the Honda’s CVT. For some buyers, however, the availability of the hybrid option may give the Honda an edge over its rivals.

Few will have complaints about interior space, as the cabin of the CR-V is vast; the second row can comfortably accommodate three adults, and they’ll enjoy more space than in most rivals. There are practicality compromises if you opt for the seven-seat model, though. The cramped rearmost row will only be tolerated by most for short journeys. What’s more, the seven-seater has a smaller boot than the huge one you get in the five-seater due to the fact that the rearmost seats fold down onto the boot floor, rather than into it, meaning the floor is higher. Lift up seats six and seven, and the boot is reduced to almost nothing.

Compared to its predecessor, the fifth-generation CR-V has a more ergonomic cabin that uses better materials. It’s not as stylish as in some alternatives, however, and the infotainment system is dated. Fortunately, Apple CarPlay and Android Auto are available in most models, so you can avoid having to interact with it much.

On the driving front, there’s quite a lot to like about the Honda. Its steering is heavier than some rivals, which helps make the CR-V feel more reassured and easy to control, while its smooth ride and capable suspension make it a refined and composed companion, even on twisty country routes. The engine options are good, too, but it’s worth opting for the more powerful and flexible variants if you’re regularly going to be carrying lots of luggage or passengers.

At launch, the only engine option was a 1.5-litre turbocharged petrol. A six-speed manual transmission was standard but a continuously variable transmission (CVT), which is automatic in its operation, was also available. Customers could also opt for all-wheel drive. A frugal five-seat hybrid CR-V was introduced shortly after the initial launch, and it’ll be this version that’ll appeal to most buyers.

The range is straightforward, with four trim levels, dubbed S, SE, SR and EX. Equipment levels are generous, with even the base model getting automatic LED headlights, DAB and Bluetooth, single-zone climate-control, start-stop, adaptive cruise control and a vast array of safety systems.

All that safety equipment, which includes lane-keeping assistance and a forward-collision warning system, is among the reasons the CR-V performs so well in crash testing. It scored the maximum five-star rating from crash testing experts Euro NCAP and achieved adult and child occupant protection scores that were better than or almost equivalent to many a more expensive alternative. 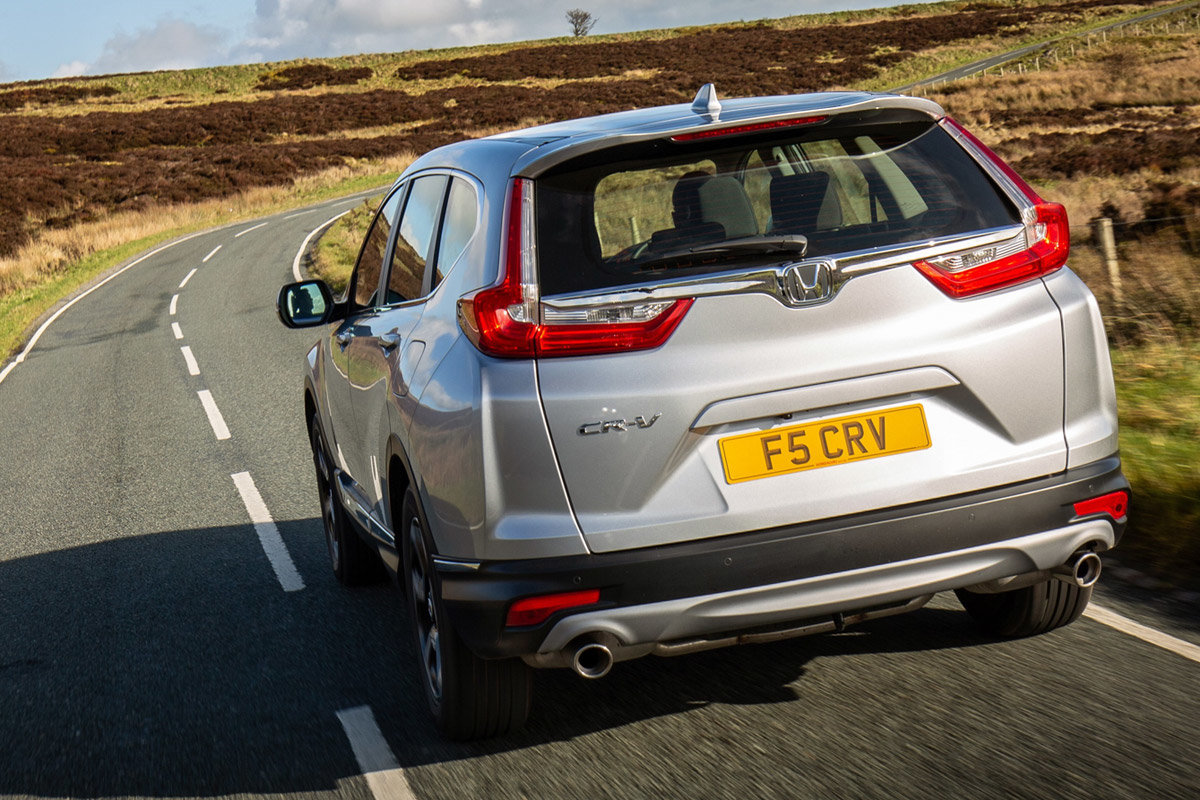 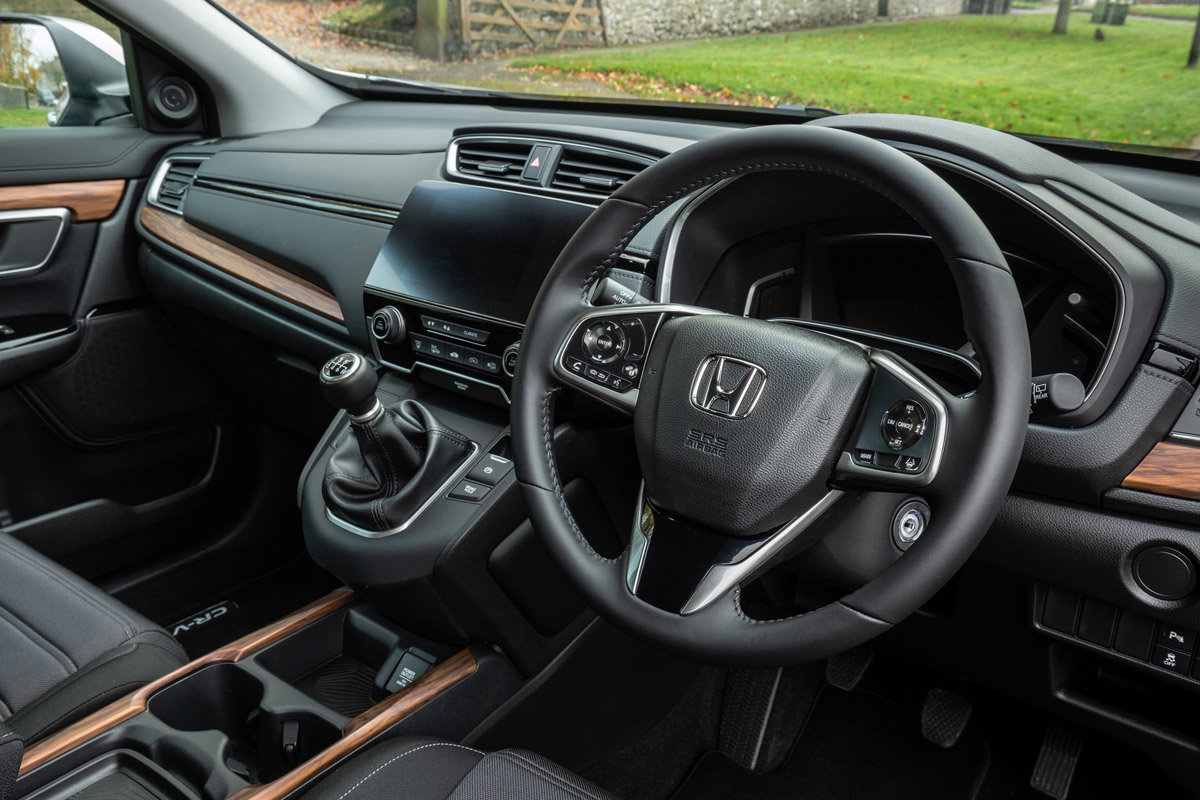 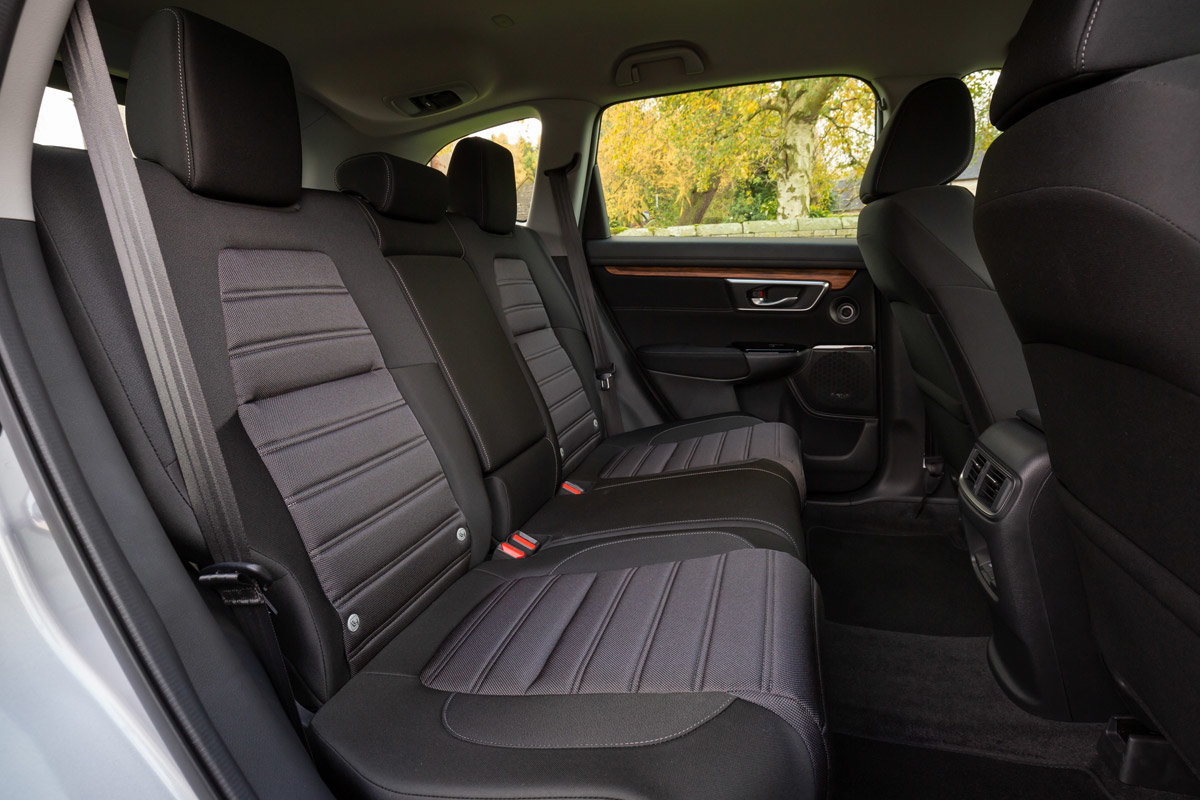 A Honda CR-V won’t cost a tremendous amount to run, regardless of which version you go for, but there are a few things worth bearing in mind. For starters, there’s no diesel version, so if you’re doing starship-like mileages each year, a CR-V might not be the best option.

Even the most efficient model, the 2WD hybrid, averages a best of 40.9mpg on the more stringent WLTP test cycle, whereas some diesel alternatives can average over 50mpg. There are so many variables, though, that you’ll need to consider the type of driving you're doing to land the most efficient choice. If you’re doing lots of urban driving, then the hybrid CR-V might prove more efficient than a conventional petrol or diesel alternative.

The hybrid is the best option if you’re otherwise just looking for a comparatively clean and efficient SUV, because it averages up to 40.9mpg and emits 156g/km of CO2 on the WLTP cycle. Some owners have also reported matching, if not exceeding, the claimed economy figure.

The standard petrol models aren’t terrible on the economy front, however. The base 1.5 VTEC Turbo, in two-wheel-drive manual form, is reputed to average 38.7mpg and emit 166g/km of CO2; that means a tolerable first-year VED rate of £540 and the standard £150 annual VED thereafter. Expect them to be a little less frugal in the real world, though.

The all-wheel-drive and CVT variants are thirstier and less clean, which won’t come as a surprise; the 1.5 VTEC Turbo CVT AWD model of the CR-V averages 32.5mpg and emits a minimum of 196g/km of CO2, which entails a hefty first-year VED rate of £1305.

To help keep costs manageable, Honda also offers both fixed-price and tailored service plans. The fixed-price plan, for cars up to eight months old with no more than 8000 miles on the clock, costs £895 and covers five years or up to 62,500 miles of servicing. The plan is transferable, too, should you sell your car to someone else. The tailored service plan is for cars outside the mileage and age range required for the fixed-price scheme, and can run for one to four years. As the name suggests, however, the cost will be dependent on the age, use and condition of the car in question. But, in any case, it’ll allow you to get a fix on upcoming costs and budget accordingly. 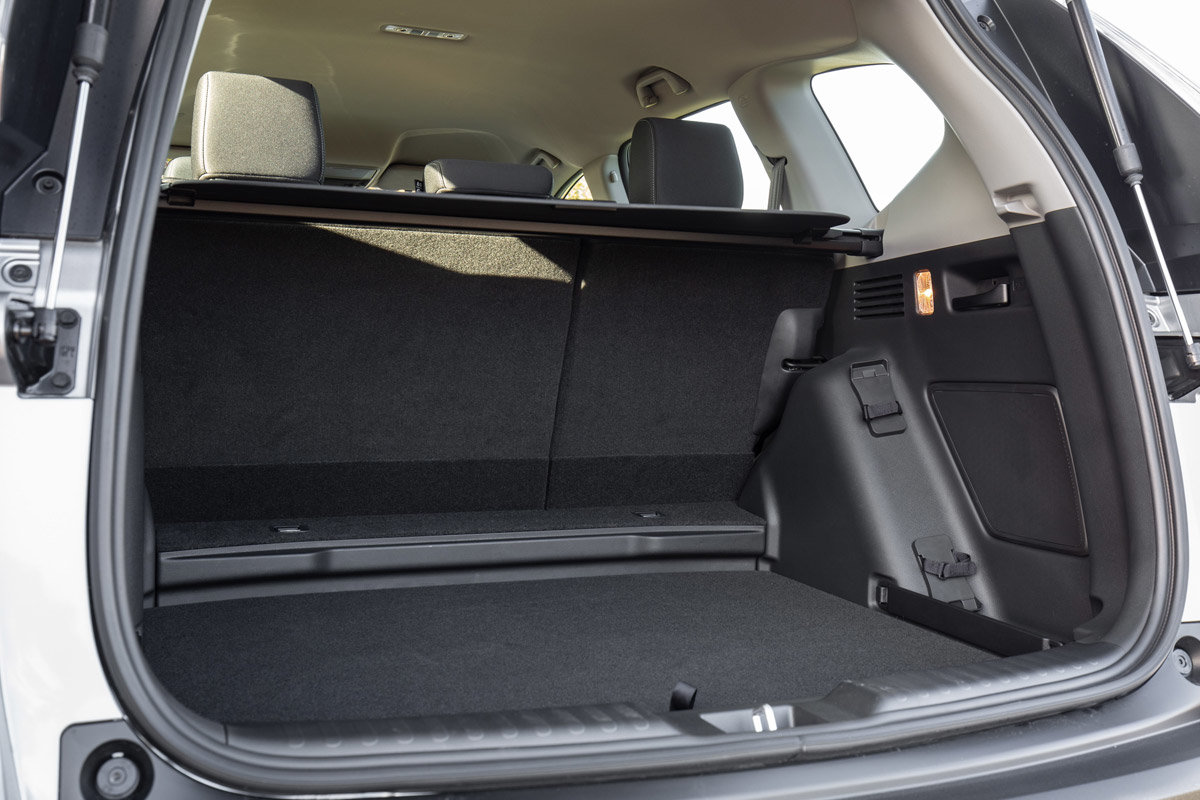 A new CR-V will be covered by a three-year, 90,000-mile warranty. It’s a competitive warranty, compared to those on many rivals, although Toyota, Hyundai and Kia do offer longer and more comprehensive warranties. So, if minimal fuss is a deciding factor in your family SUV purchase, you may want to consider alternatives such as the RAV4, Tucson or Sportage.

That said, you can extend the Honda warranty on a CR-V by up to two years. Honda quotes around £500 for year four alone, or £900 for years four and five together. If you’re considering long-term ownership, it could be worth investing in for peace of mind.

Beneficially, Honda generally has a very good reputation for customer satisfaction and reliability. It also has an extensive dealer network, so if a problem occurs then it shouldn’t prove difficult to get it resolved.

There have also only been a few minor recalls on the CR-V, which suggests major issues should be few and far between. Nevertheless, it’s worth checking if any potential used purchase is afflicted by the issues and whether they’ve been resolved. Use the government’s online recall checking service to see if the car you’re interested has been recalled and ascertain, either through the paperwork or by speaking to a dealer, if the recall has been carried out.

If you want a used CR-V, you could consider buying one from the official Honda Approved scheme, especially if you want to keep worries to a minimum. This offers cars with a minimum of 12 months’ warranty, breakdown cover, a 30-day, 1000-mile exchange plan and a range of other benefits. 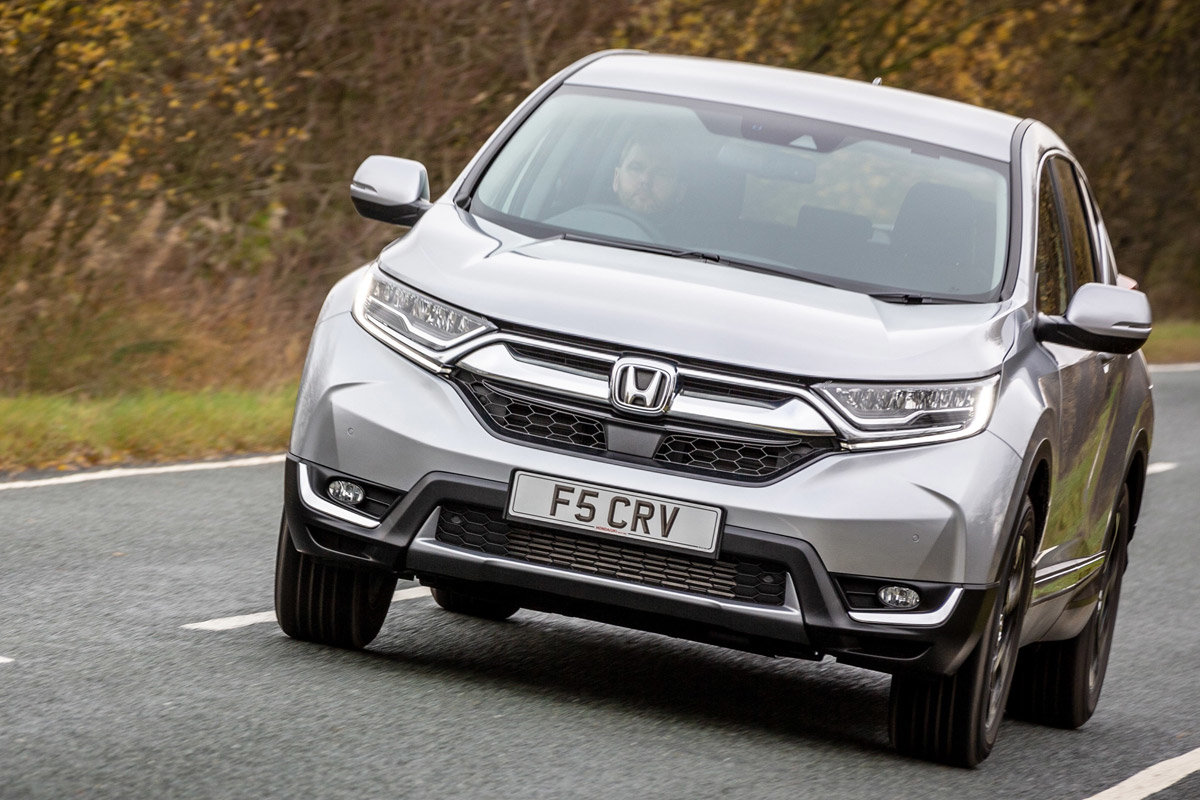 The Honda CR-V is a comfortable, practical and safe option that is well equipped and good to drive. The availability of hybrid, all-wheel drive and seven-seat versions lend it further appeal, although the usefulness of the seven-seat model is admittedly limited.

Altogether, especially for those who want a straightforward and reliable SUV, it’s not a bad choice by any stretch. However, the family SUV sector is so competitive that issues such as the petrol model’s unremarkable efficiency and emissions, and the archaic infotainment system, make it hard to recommend as a go-to option.

It can also get quite expensive, as you scale the trim grades or add options, which further makes it less desirable. Consequently, while not worthy of immediate dismissal, most will find a better and more accommodating overall package in the form of rivals such as the Skoda Kodiaq or Karoq, Mazda CX-5, Toyota RAV4, Ford Kuga or Volkswagen Tiguan.

Search for a Honda CR-V for sale on CarGurus.