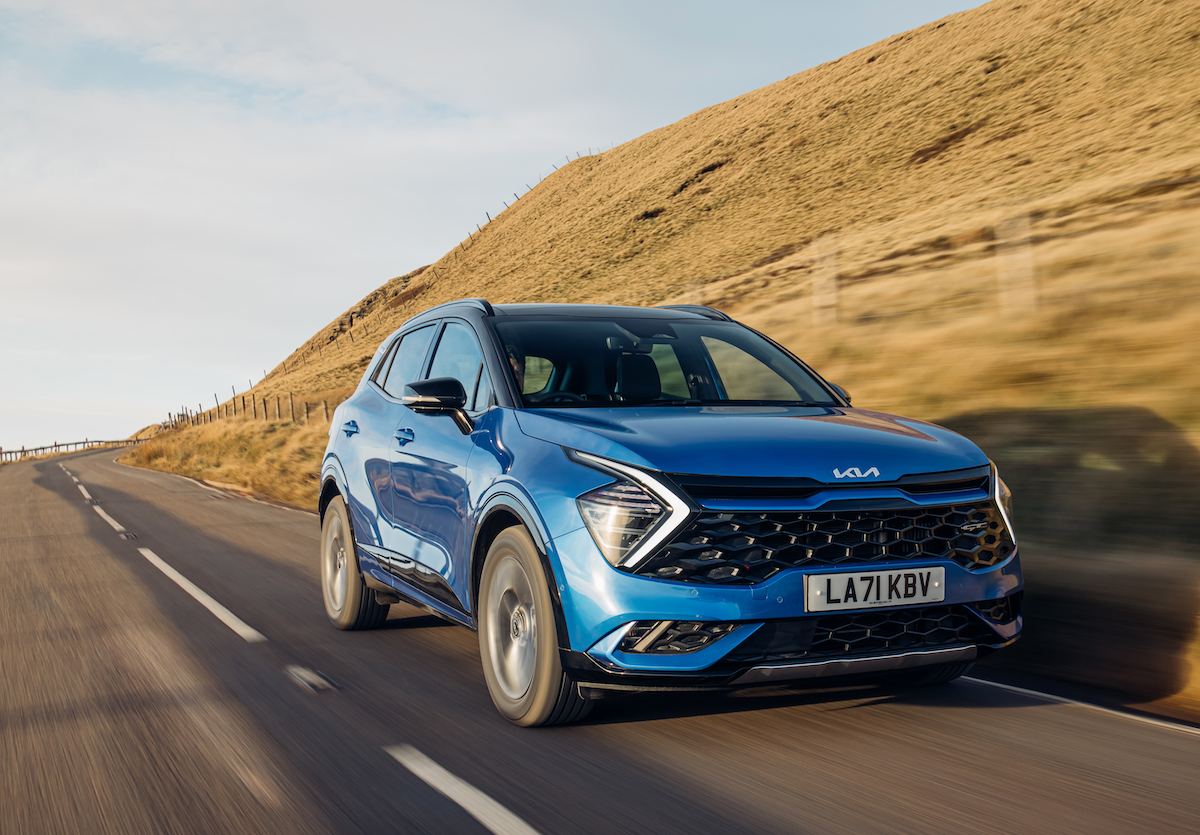 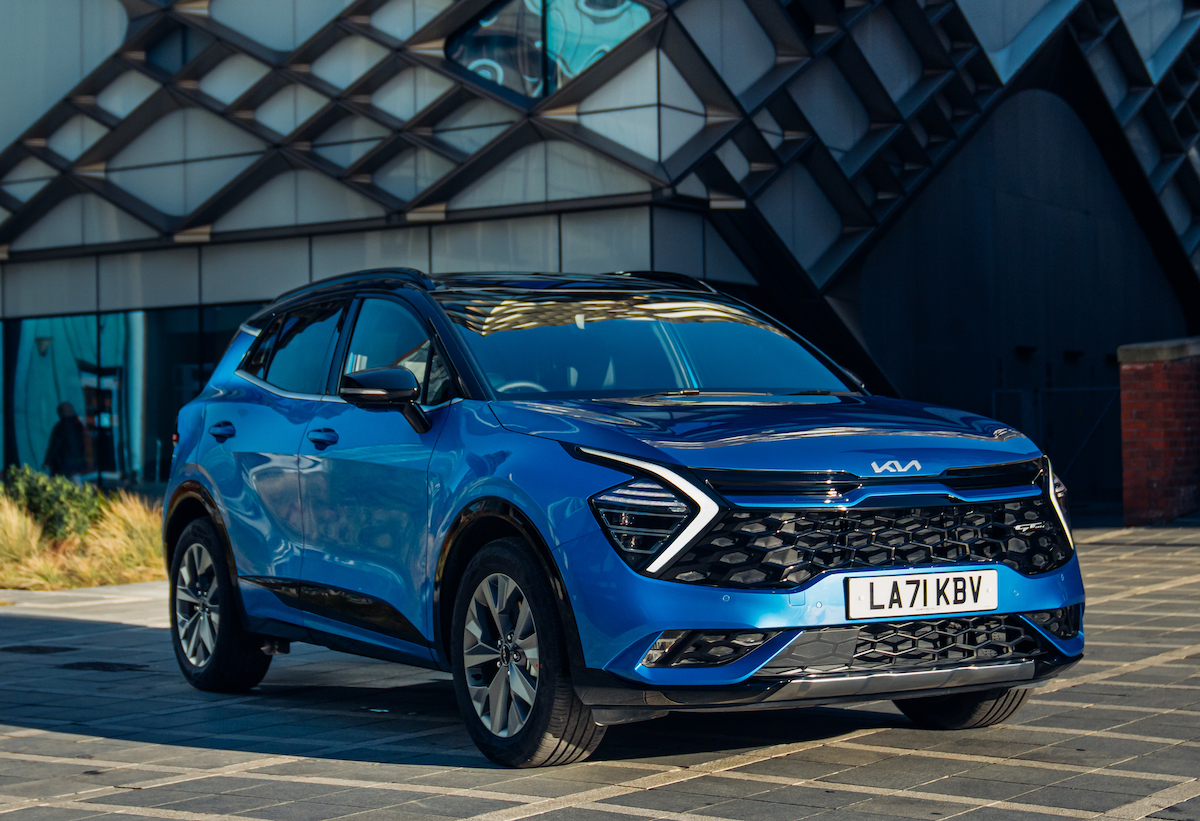 The Kia Sportage is one of the best-selling family SUVs in the UK. Where traditionally it's appealed largely on account of its good value, practicality and seven-year warranty, the latest model adds in a bold new look and one of the most hi-tech interiors in the class. 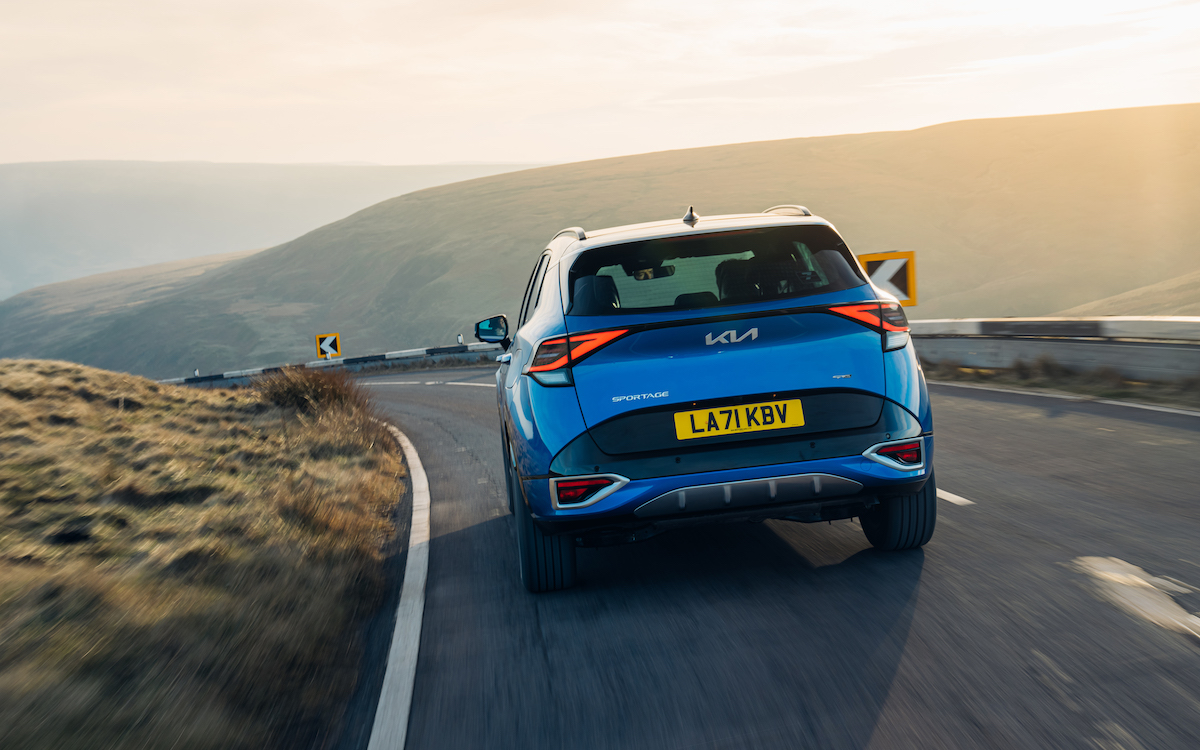 What is the Kia Sportage Mk5?

Kia was already on a roll by the mid 2000s thanks to the then-new Ceed, but it was the arrival of the Mk3 Sportage in 2005 that catapulted the Korean brand into what would go on to be a regular fixture in the top-sellers chart. In fact, the Sportage is Kia’s biggest-selling model in the UK, Europe and globally.

By 2022 the Mk4 has also been and gone, leaving us with the car you see here: the new Kia Sportage Mk5. As with its direct predecessors, this is a sister model to the Hyundai Tucson, and uses the same platform and drivetrains. What's changed, is that where previous versions of the Sportage have been relatively subtle evolutions of what went before, for the latest model Kia has really gone to town. At both the front and the rear the Sportage is a riot of swoops and curves (often inspired by Kia's EV6 electric car), with hi-tech LED lights, generous curves and creases, and the kind of enormous grille that not so long ago only the likes of Audi and Lexus would have been brave enough to attempt.

In this review of the Kia Sportage, we'll cover how practical it is, what it's like to drive, the technology and equipment, and its projected running costs to see how it fares in what is a crowded market for family SUVs.

Anybody coming from a previous generation Sportage will find more luggage space and more room for passengers in this latest model. Boot capacity varies slightly depending on what powertrain you go for, ranging from is 591 litres in the front-wheel-drive petrol manual, to 526 litres in diesel all-wheel-drive (AWD) models. In all cases, there’s an adjustable height boot floor, a flat loading lip and a useful square shape to the load bay with only minor intrusions from the rear wheel arches. All models come with 40:20:40 split-fold rear seats, which leave a flat floor when folded.

Rear-seat passengers get plenty of legroom and have the option of adjusting the angle of their backrests. Unlike the Skoda Karoq or Honda CR-V, however, you can’t slide the rear seats forwards to create more boot space. Top-spec models come with a panoramic sunroof - while this steals some headroom from the rear of the car, anybody up to six-foot tall will still feel perfectly comfortable.

Those in the front seats will find generous storage almost everywhere they look. The centre console has a lidded tray for phone and keys, along with two cupholders and an additional tray for odds and ends. There's also a large storage box under the armrest, the glovebox is a good size, but although slim, the doorbins have just enough room for a water bottle.

Quality, fit and finish are impressive by class standards (that is, mostly very good if not as tactile as models from the premium German brands such as BMW and Audi), and there’s enough variety in the materials to maintain interest.

Gone are the days when you bought a Kia simply because it was good value. The Sportage is yet further proof that Kia’s cars are also genuinely good to drive.

On the ride and handling front, the Sportage strikes a sensible balance between comfort and engagement. On 18-inch alloy wheels you can expect the ride to feel a touch unsettled and jittery over craggy roads at town speeds. But this eases once you’re up to 40- or 50mph, at which point the suspension feels more at ease and composed. Grip is plentiful whether you opt for front-wheel drive or all-wheel drive, and the Sportage turns into corners keenly. There’s meaty weight to the steering that makes this generation of Sportage feel much more substantial to drive than any of its predecessors. Don’t expect much feel through the rim of the wheel, but that aside the Sportage does a neat job of blending SUV solidity with useful agility. Quick direction changes are handled with minimum fuss, and even when driven quickly the Sportage never feels ragged or on edge.

Add in high levels of refinement and the result is an extremely well-rounded family SUV, not to mention a great motorway car with well controlled levels of wind and road noise. Overall, a Seat Ateca or Ford Kuga is going to be slightly more fun to drive, but the fifth-generation Sportage gets closer than ever before.

Driving position and visibility are good. Kia has added an extra small window at the leading edge of the front doors to minimise intrusion from the A-pillar, which helps when it comes to seeing out of junctions. At the rear of the car, the sloping roofline results in a chunky C-pillar that does restrict visibility. Kia’s way around this is to fit technology such as blind spot cameras on higher spec models, as well as a good reversing camera and parking sensors on all trims.

On the drivetrain front, Kia predicts it’ll be the full hybrid model that is most popular with UK buyers. It’s a good system, with a seamless switch between EV running and petrol power, and a smooth-shifting automatic gearbox. When cold the petrol engine sounds a little gruff, but it quietens down once warmed through and for the vast majority of the time is a distant companion as far as noise levels go. Performance is easily strong enough for a family SUV. Expect 0-60mph in 7.7 seconds in front-wheel-drive versions (8 seconds for four-wheel drive), as well as enough pull through the automatic gearbox's six ratios to make overtaking easy. Selecting ‘Sport’ rather than ‘Eco’ on the drive mode dial on the centre console adds enough extra urgency to the throttle response to be worth using when the road twists and turns and you’re in the mood for some fun.

We've also driven the 1.6-litre GDI petrol engine both with and without mild hybrid power, and with both six-speed manual and seven-speed automatic gearboxes. With 148bhp, the engine is gutsy enough in the low- to mid-range, although does sound strained when revved hard. However, with the Sportage not being a performance car, that's not a huge problem. Of the gearbox options, the manual model is a little easy to stall on account of the clutch's vague biting point, but the auto is smooth and responsive - it'd be our pick. Expect 0-60mph in under 10 seconds in any of these configurations.

With twin 12.3-inch curved screens (one for the infotainment and the other for the digital dials), the Sportage appears impressively hi-tech when you first climb aboard. This setup comes as standard on all but the ‘2’ and ‘GT-Line’ trims. Opt for the former and you get standard analogue dials and an 8-inch infotainment system, while the GT Line pairs analogue dials with the 12.3-inch infotainment. All models come with Apple CarPlay and Android Auto.

We've only tried the larger screens so far, and came away impressed. Both the dials and infotainment feature ultra-sharp graphics and configurable displays. The digital dials don’t quite match Audi’s Virtual Cockpit for features and ease of use, but they’re not terribly far off. The main touchscreen meanwhile is a triumph, from its curved screen to the control logic that sits behind it. A gloss black panel that lives below the screen allows you to select between controls for heating or infotainment – this adds a touch of theatre, albeit with a slight compromise to its ease of use.

In short, while some rivals might undercut the Sportage on price, the Kia is among the best in class for standard equipment and technology. 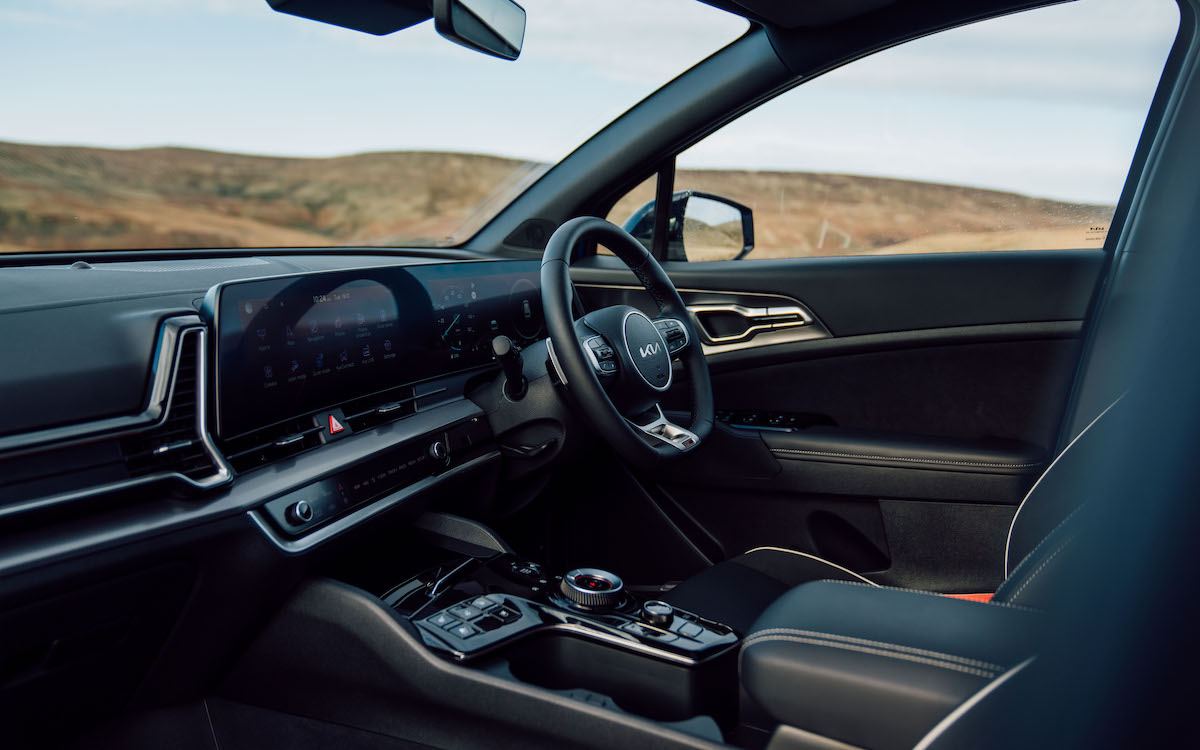 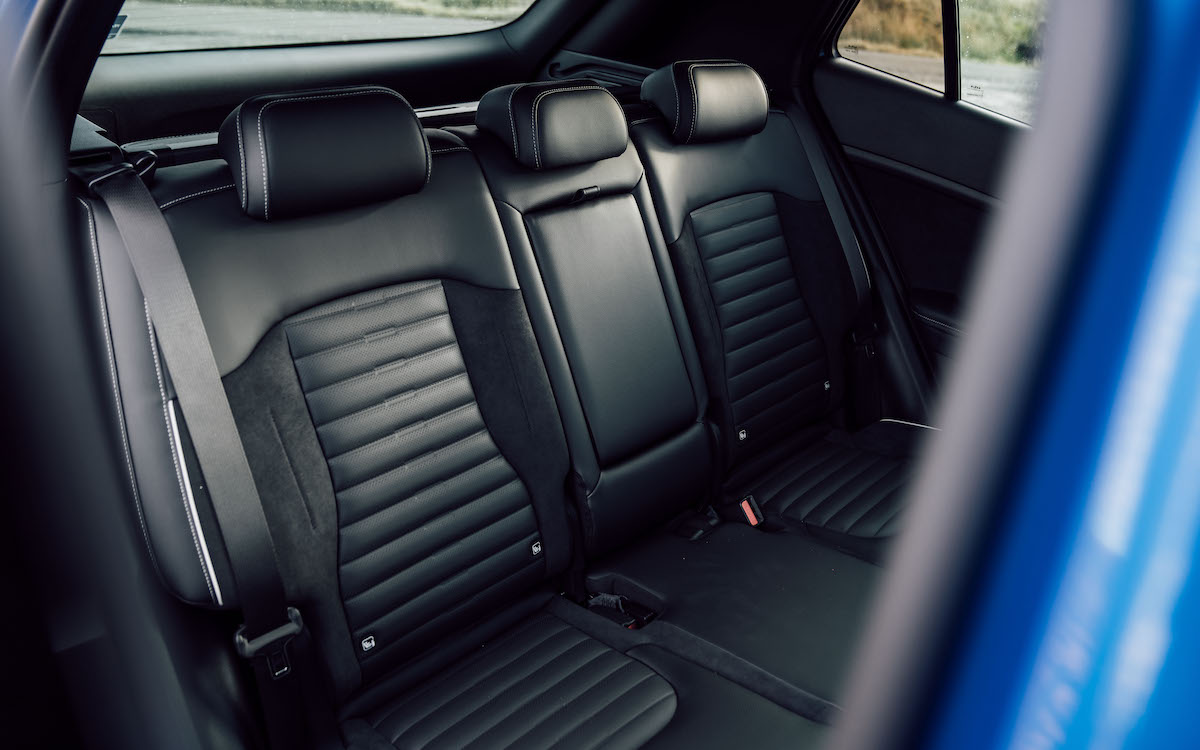 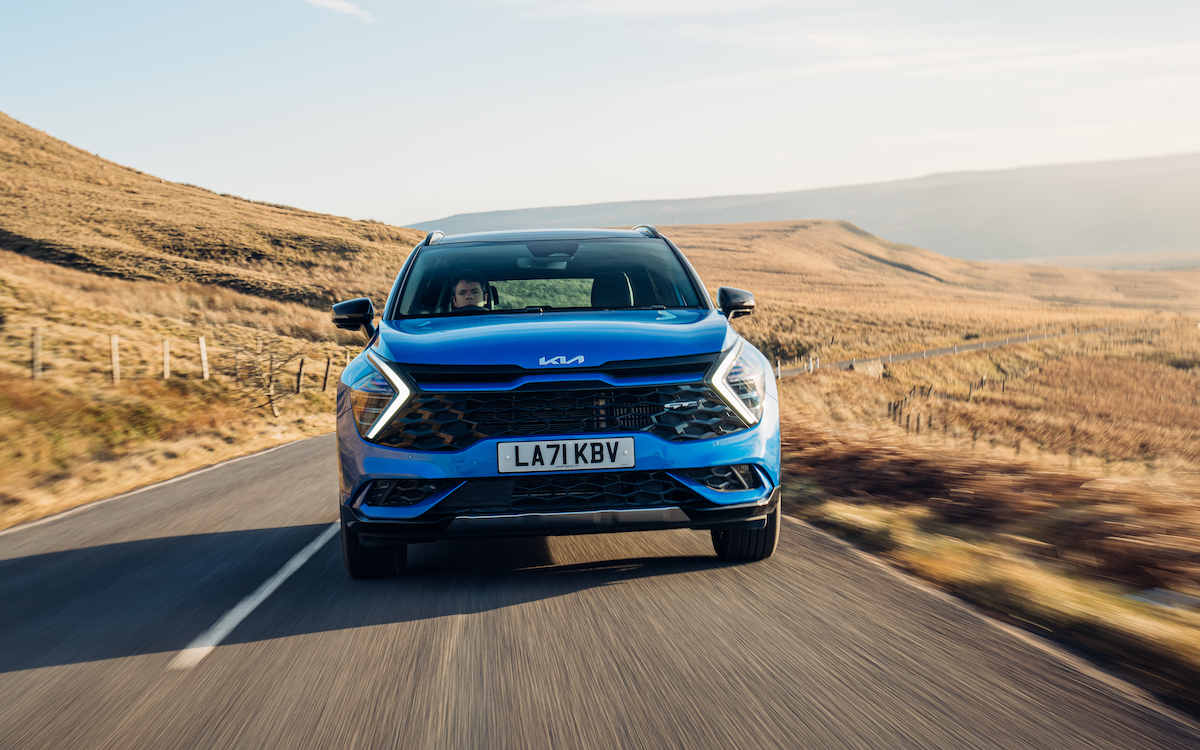 The self-charging hybrid Sportage with front-wheel drive will average between 40-45mpg in normal driving that includes town, motorway and country roads, which is a perfectly respectable mpg figure respectable for this size and type of vehicle. Over the same route the standard 1.6-litre petrol Sportage with a manual gearbox also returned between 40-45mpg, which might make you question why you'd spend a premium for the 'self-charging' hybrid technology. The answer is most likely if you spend a lot of time driving in town, where the hybrid is likely to be the more efficient option, or if the CO2 savings (129g/km for the full hybrid vs 146g/km for the mild hybrid) look attractive. The hybrid drivetrain also produces more power and is thus faster.

Our tests of a 1.6-litre petrol engine with an automatic gearbox, all-wheel drive and the mild hybrid system suggest you can expect average fuel economy to hover between 35 and 40mpg.

We are yet to drive a Sportage Mk5 with a diesel engine, but Kia's figures suggest you can expect around 53-54mpg. Figures for the upcoming plug-in hybrid version are yet to be published, but we'd expect a pure electric range of around 30 miles, contributing to the kind of low CO2 emissions that will offer plenty of appeal for company car drivers. 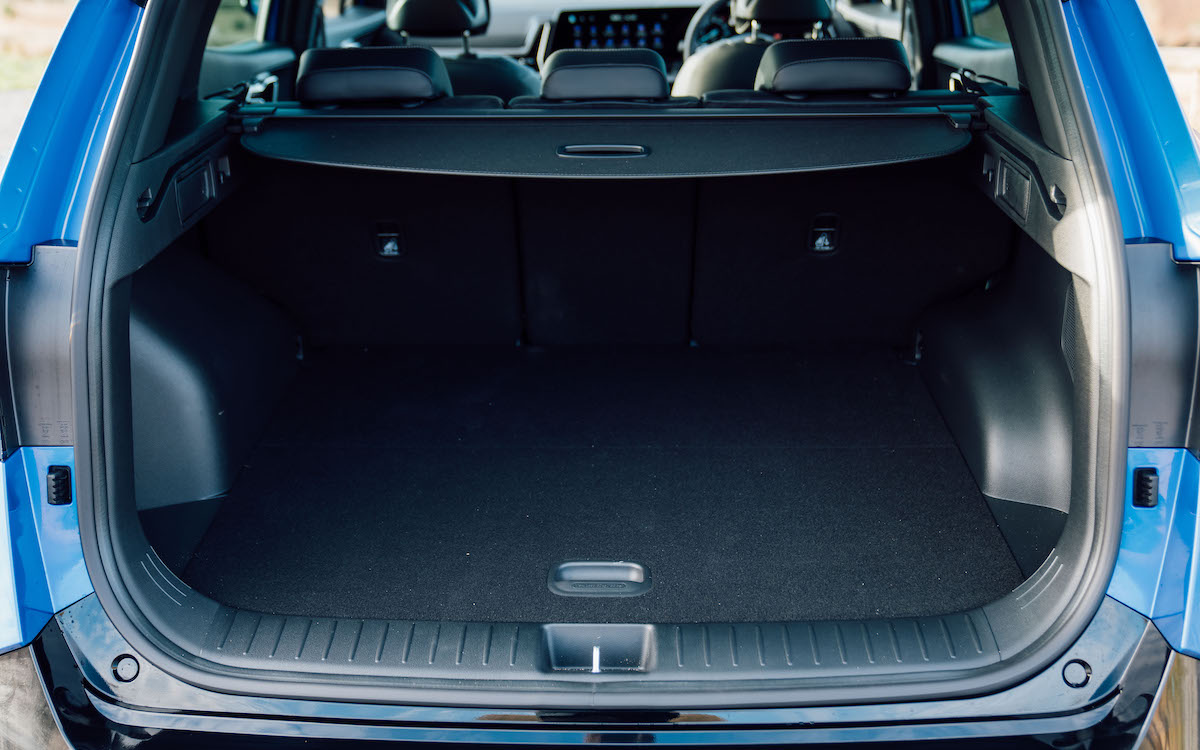 The fifth-generation Kia Sportage SUV is too new to have any reliability data to fall back on, but Kia’s record suggests there shouldn’t be much to worry about. Previous versions of the Sportage proved themselves to be generally robust; for example, the outgoing model scored sixth place in its class in the 2021 What Car? Reliability Survey.

If faults do occur with your Sportage, you’ll have the reassurance of Kia’s seven-year, 100,000-mile warranty to fall back on. 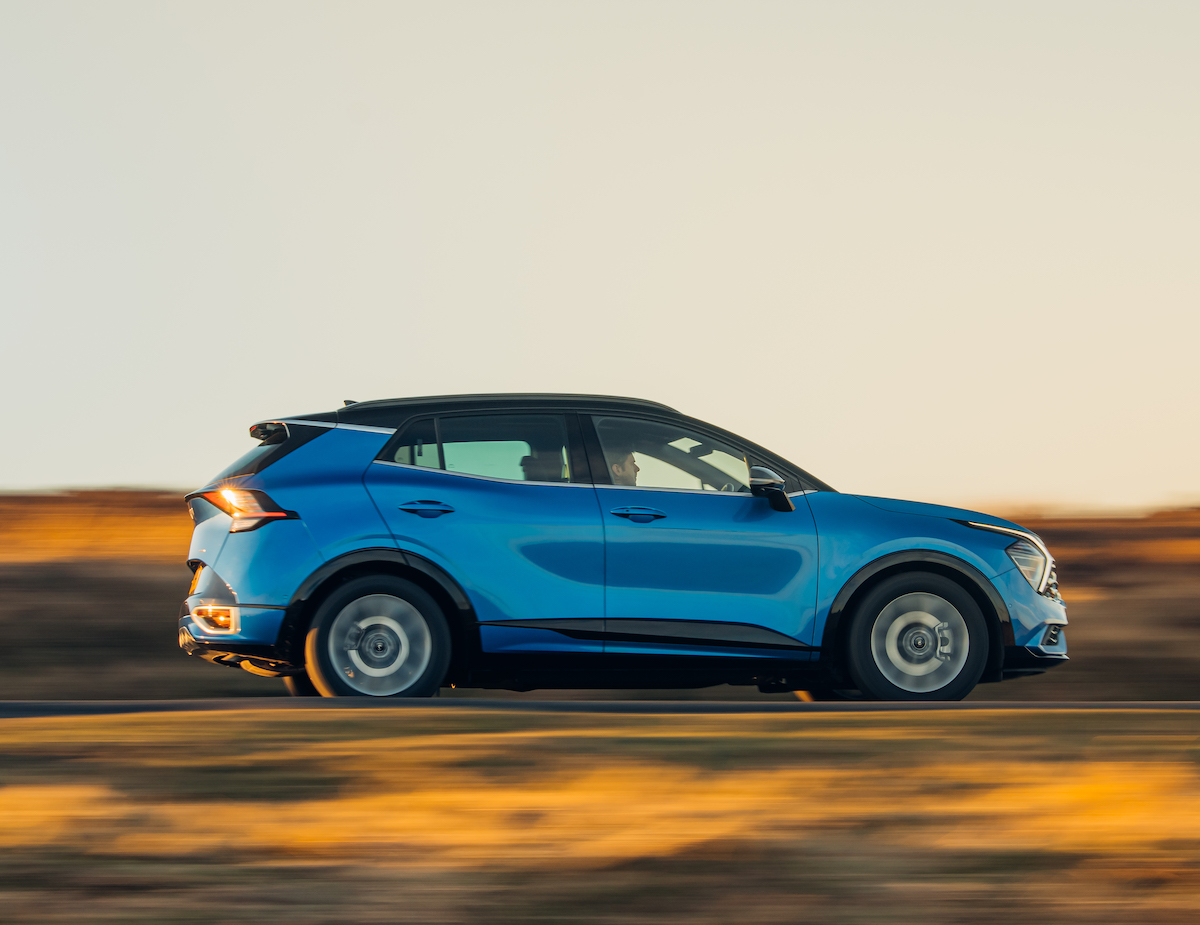 The fifth-generation Sportage is bold enough to stand out from the crowd, features a tech-first interior, and has all the practicality you could expect from a five-seat family SUV. Kia’s decision of offer its new car with one of the widest range of powertrains on the market should also mean there’s a Sportage to suit most needs.

Throw in a well-judged balance of ride comfort and handling, along with Kia’s seven-year warranty, and you have one of the strongest all-rounders in the family SUV class, and a worthy rival to the likes of the Nissan Qashqai, Mazda CX-5, Ford Kuga and of course the mechanically similar Hyundai Tucson. Highly recommended.

Search for a Kia Sportage Mk5 for sale on CarGurus