Buying A Used Car For Towing A Caravan

You’re looking for a used tow car to pull a caravan, boat, or horsebox. You need a car that tows well, but don’t want to be stuck with a thirsty old lump for everyday driving. Where do you start? Follow these tips and you won’t go far wrong.

If you know what you’ll be towing, start by thinking about how much it weighs. Let’s say you own a caravan, and it weighs 1,200kg when fully loaded. Both of the major caravanning clubs in the UK recommend towing a caravan weighing no more than 85% of the kerb weight of the car, especially if you are new to towing. So take the caravan’s weight, divide by 85, then multiply by 100. In this case, you’d be looking for a car weighing 1,412kg or more (you can check how much a car weighs with a quick Google search).

This is a useful tip to make sure you don't buy a Skoda Fabia or Volkswagen Polo to tow your massive caravan, when something closer to a Land Rover Discovery or Audi Q7 might be a better option. It's sometimes referred to as ‘the 85% rule’, which can lead to confusion – it’s a guideline rather than a hard and fast rule, but towing will be more stable and safer if the car weighs significantly more than the caravan. The guideline is well known in caravanning circles, but it’s a good rule of thumb whatever type of trailer you tow.

You also need to make sure you stay the right side of the law. That means checking the car’s legal towing limit or towing capacity (look in the car’s handbook, check the weight plate, or use a matching website like Towsafe.co.uk), and be sure whatever you are going to tow is within the legal maximum. 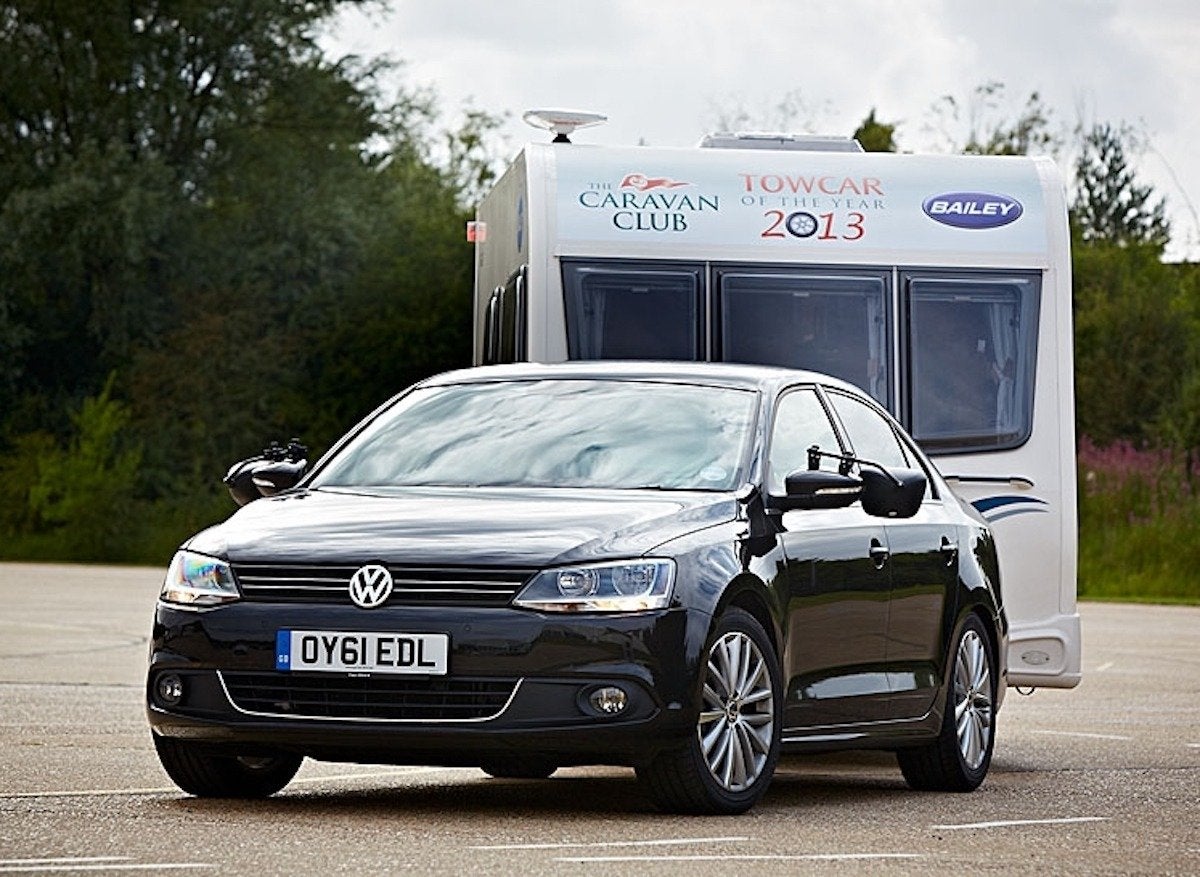 Choosing a used tow car means balancing everyday requirements with how well a car will perform as a towing vehicle. A lighter, less powerful car may get better fuel economy when you run it day to day, but all else being equal it will be slower and less secure when towing then a heavier and more powerful model. It may well also have less practicality.

Our advice? Prioritise towing ability. Make a shortlist of the best cars that will definitely be up to the job of towing a caravan or trailer, then you can start to figure out what cars on that list are easy to live with and affordable to run.

Generally, those in the know recommend diesel cars over petrol, as they have more low-end grunt, known as torque. This means you don't need to rev the engine hard to make decent progress. They'll get better fuel economy than an equivalent petrol too, and are particularly good if you do lots of motorway miles.

That said, modern petrol cars are much closer in performance, so while you'll see an awful lots of 2.0-litre diesel engines in lists of the best tow cars, it isn't an absolute must. You can even tow with electric cars. Still, we'd recommend checking out what's been winning car of the year at the various tow car awards. 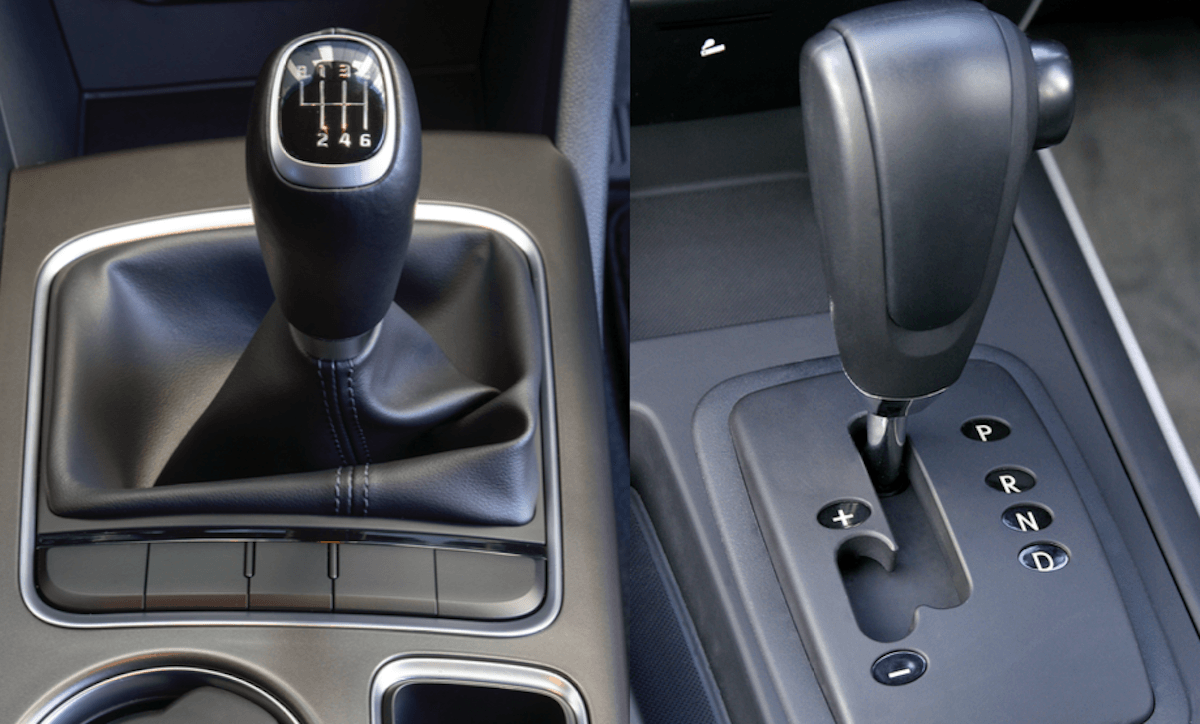 Some drivers still worry that automatic gearboxes overheat when towing, but in reality it’s not a big concern as long as you match car and trailer sensibly. If you are within the legal towing limit a well maintained modern auto should have no trouble towing.

There are others who prefer the control a manual gearbox gives over gear selection, along with the benefits of engine braking. But when just about every auto now gives drivers control through the lever or with paddles behind the steering wheel, that’s no longer significant.

Really, this choice comes down to personal preference, unless there’s a significant change in the towing limit between the manual and automatic versions of the same model. Be sure to check – sometimes the difference is as much as 500kg.

Increasingly, premium cars from manufacturers like BMW, Volvo and Jaguar come only with an automatic gearbox. Don't let that put you off. But more affordable brands like Ford, Kia, Nissan and Honda all offer cars of different sizes with manual or automatic gearboxes, so there's plenty of choice. 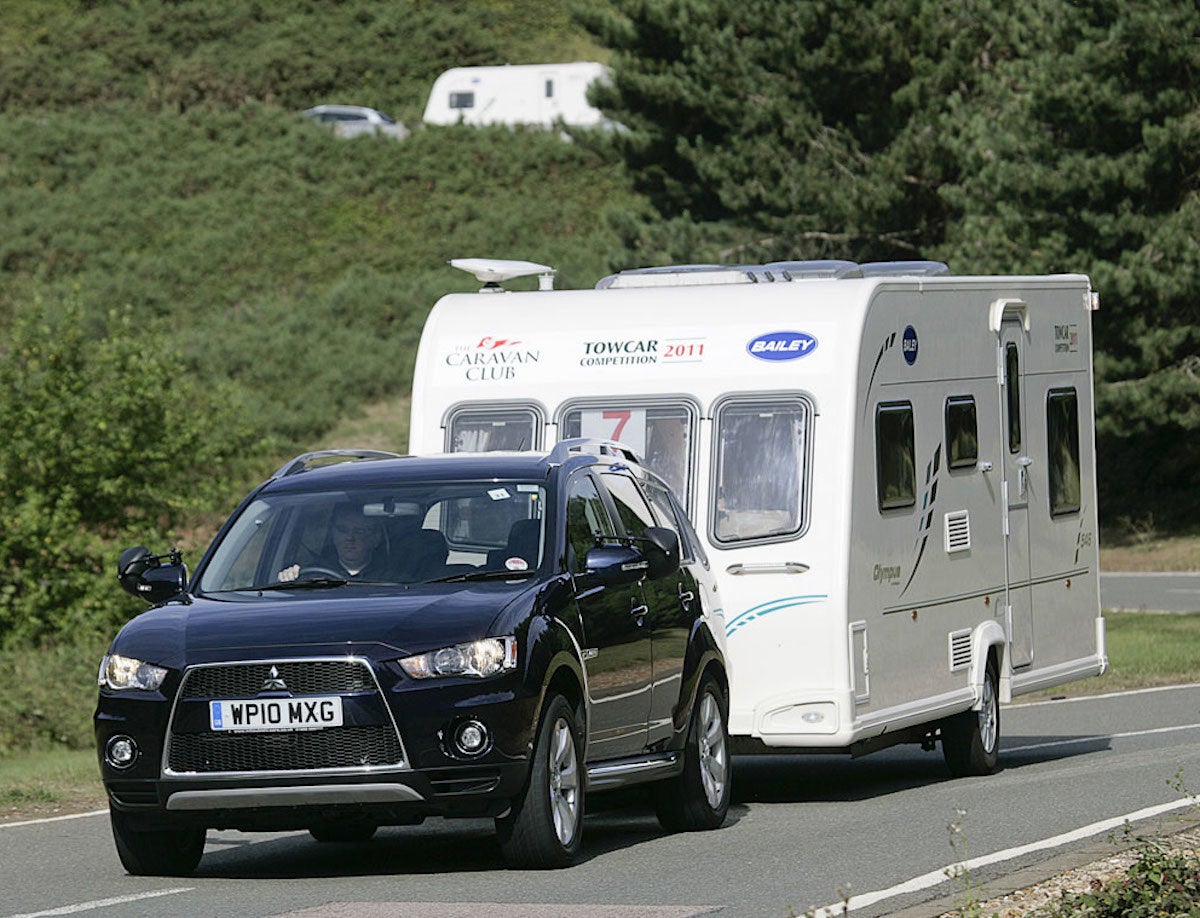 A 4×4 is the obvious choice for towing, but it’s not essential – rear-wheel-drive (FWD) and front-wheel-drive (RWD) cars can tow as well. The benefits of four-wheel drive are greatest if you tow all year round, need to tow across grass, mud or other off-road surface, or have a boat you will be launching from a damp slipway. Not all cars with four-wheel drive are SUVs or crossovers – there are plenty of estate cars and saloons so equipped, although they won't have the same kind of ground clearance for really rough terrain.

However, if you are planning to caravan in the summer months, and will always be towing on a hardstanding pitch (parking your caravan on gravel or Tarmac rather than grass), then four-wheel drive is not necessarily essential. 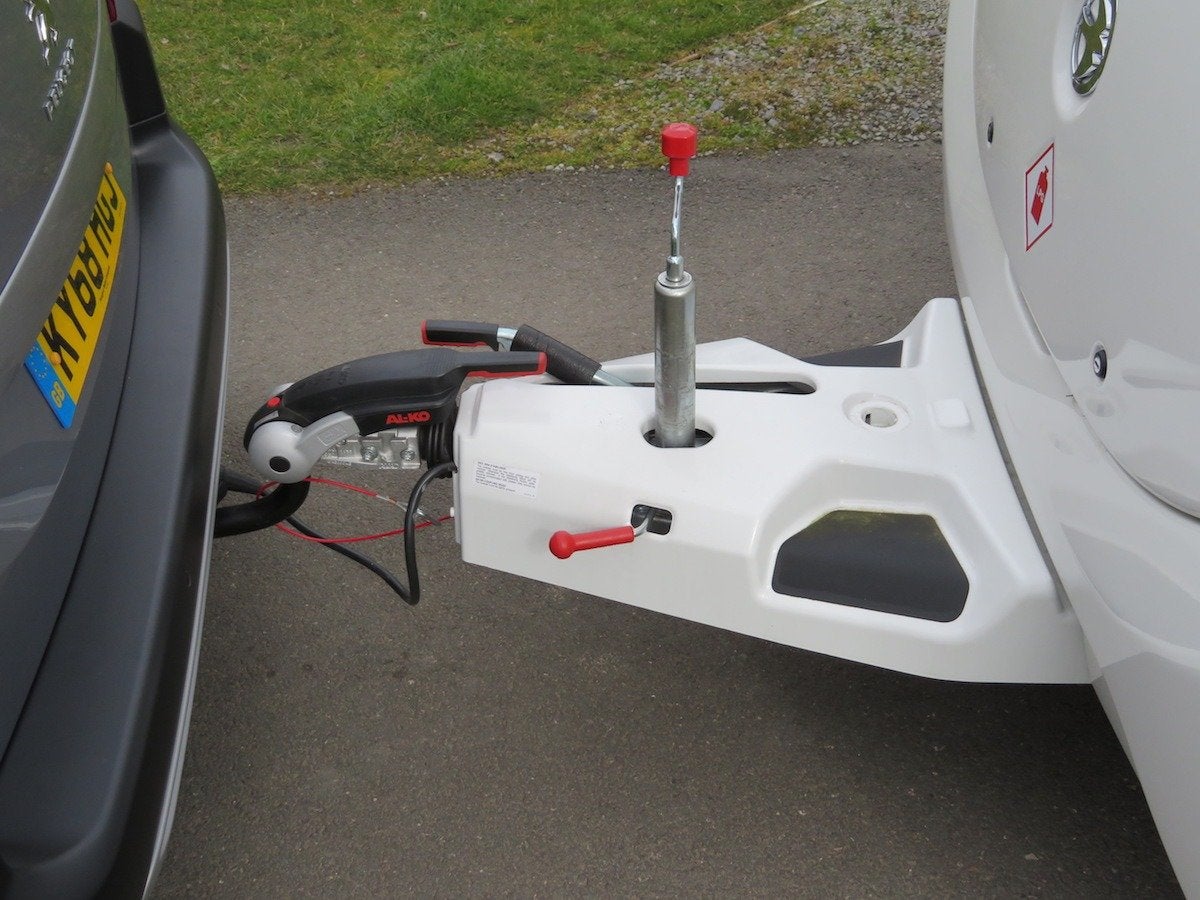 It’s a cliché of used car guides that the buyer should “walk away if you see the car has a tow ball”. Towing puts more strain on a car, the logic goes, so why buy a car that’s led a hard life?

Like most clichés, there is a nugget of truth to it, but in this case a very small nugget. If you are buying a small hatchback with a tow ball, and there’s a huge twin-axle caravan sat on the drive, you have good reason to be worried. But check the car’s legal towing limit and the weight of what it has been towing. If the caravan or trailer is well within the legal maximum, don’t be unduly concerned if the car already has a tow ball.

In fact, having towing gear already fitted could and should be a big plus point, given that a professionally fitted tow ball and electrics could easily set you back £500 or more.

Just go in with your eyes (and ears) open. When you take a test drive, listen out for any signs of a slipping clutch (such as the engine revving higher without noticeable acceleration or a burning smell from under the bonnet). And when you check the service records pay particular attention to any work that’s been done on the clutch and gearbox. 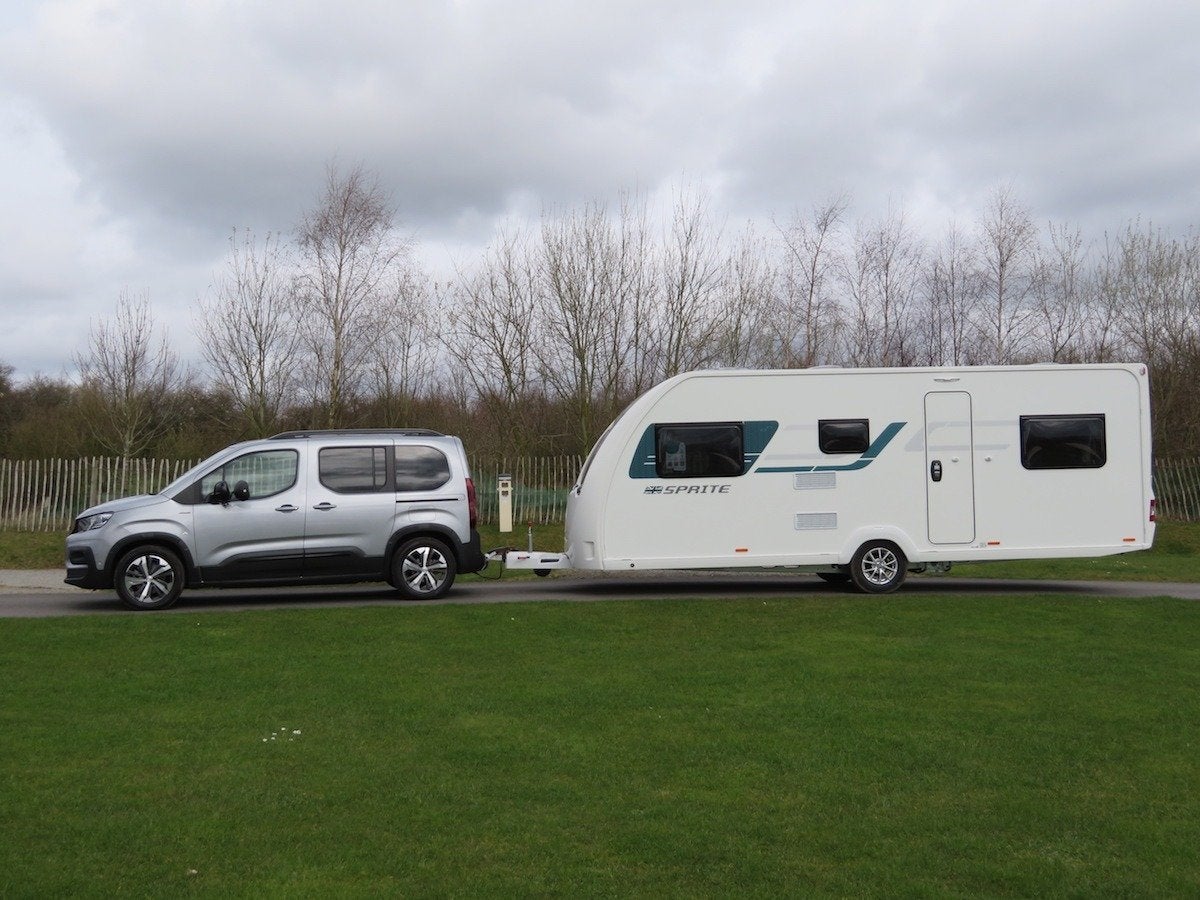 The key thing when buying a used tow car is to think about what you need to tow and the conditions you’ll be towing, and only then plan your shortlist of models. You can narrow the list further by looking for a car that suits you as a tow car and an everyday drive. And remember to factor in the cost of fitting towing gear, unless the car already has a tow ball fitted – in which case you’ll be quids in, so long as the car hasn’t been used to tow more than it should.

The Top 10 Used Towing Cars
Can You Tow with an Electric Car? Weighing up the Pros and Cons of EV Towing
Car Towing: The Basics Explained

by David Motton
The content above is for informational purposes only and should be independently verified. Please see our Terms of Use for more details.