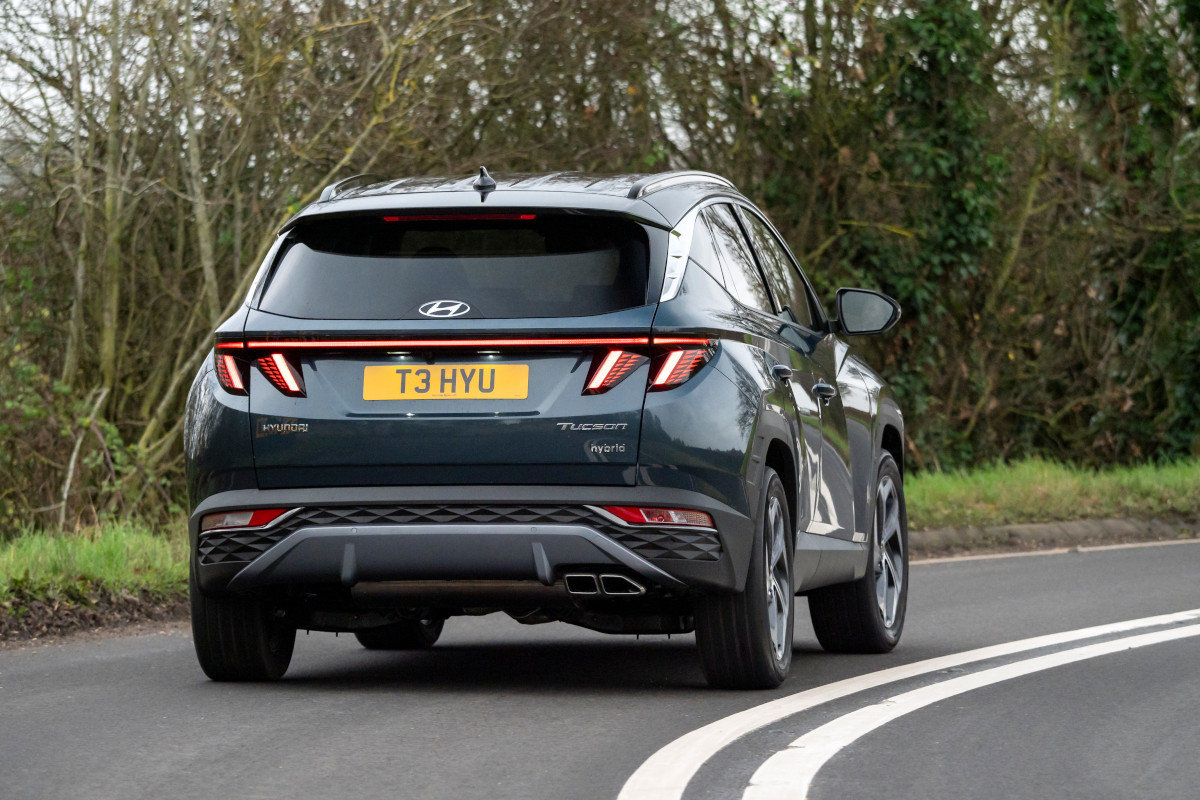 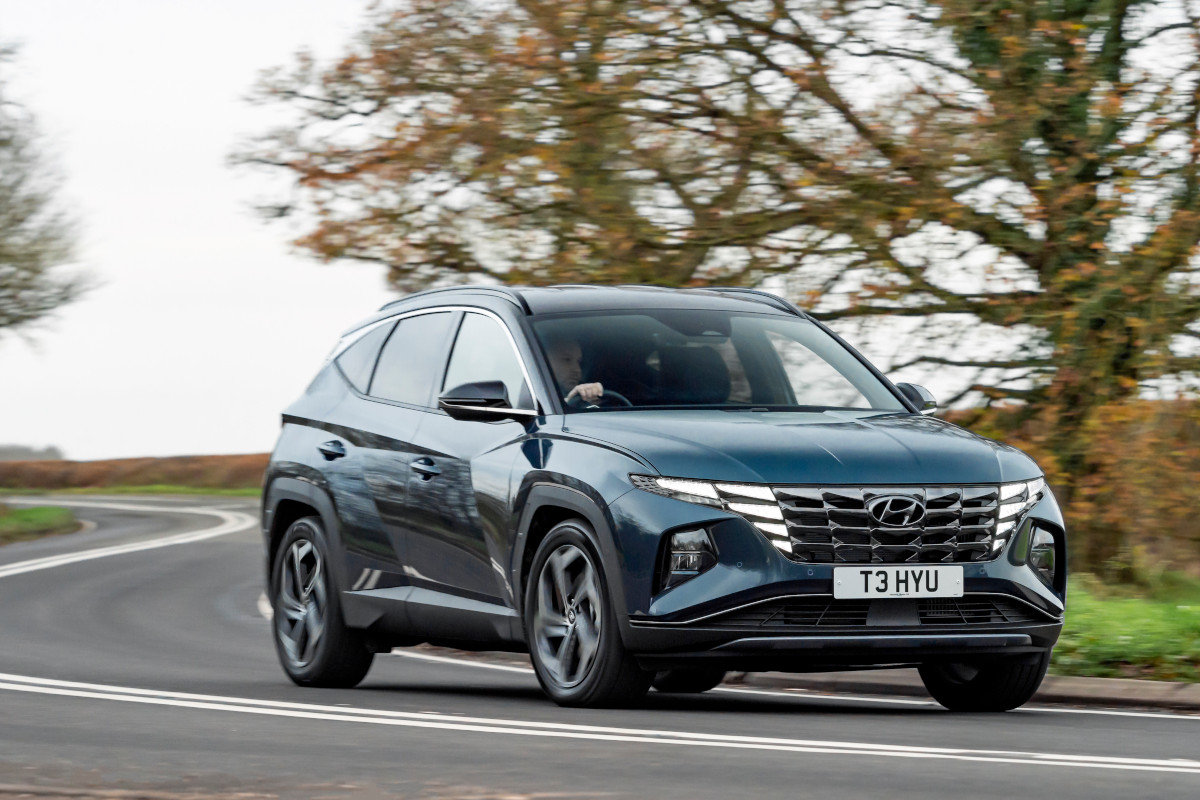 The Hyundai Tucson is a strikingly styled mid-sized SUV crossover that’s generously equipped and well built. It’s genuinely spacious, too, with a large boot and plenty of room in both the front and rear seats, even for taller adults. There are no diesel versions available in the UK, but the turbocharged 1.6-litre petrol engine comes in several different power outputs, and there’s a choice of mild-hybrid, self-charging hybrid and plug-in hybrid options. 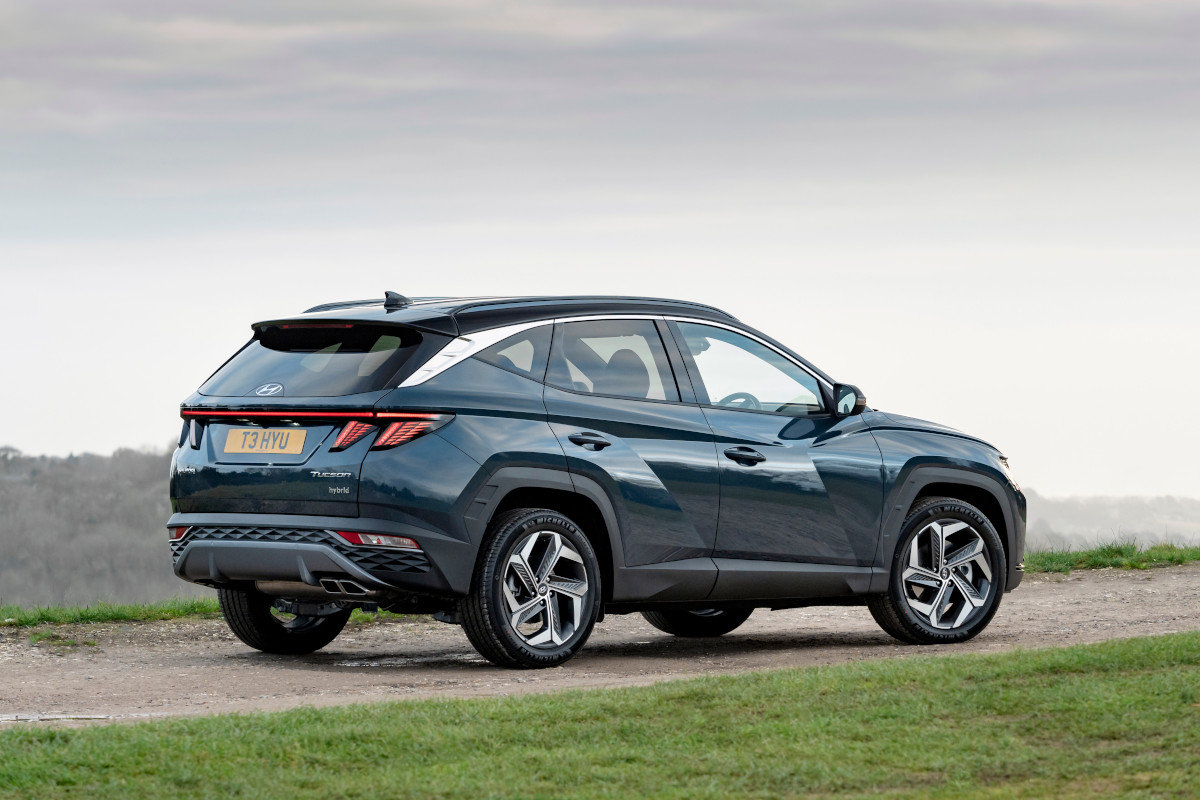 What is the Hyundai Tucson?

The current Hyundai Tucson went on sale in the UK in early 2021. It’s the fourth major redesign since the model was first introduced in 2004. Since then, Hyundai has shifted its focus from being a manufacturer of worthy, budget models to becoming a maker of far more aspirational cars. But the Tucson is the first to take a serious tilt at premium brands.

So although the Tucson is still a competitor for the Ford Kuga, Skoda Karoq and Peugeot 3008, it’s also now setting its sights a little higher, with top-end Tucson models in the same pricing bracket as the Audi Q3 and BMW X1. And that’s perhaps the Tucson’s biggest challenge: it faces an enormous number of rivals.

What, then, makes the Tucson stand out? Well, its styling is certainly distinctive. At the front, the segmented lights blend into a prominent grille, while at the sides, the combination of Coke-bottle curves and sharp creases draw your gaze.

Inside, the Tucson is equally striking, with twin silver trim lines that shoot out from the centre console, wrapping around the front of the cabin and incorporating the front air vents.

In the boot, you’ll find 620 litres of luggage space in the non-hybrid petrol model, which is up there with the class best (though the self-charging hybrid gets 616 litres, the mild hybrids make do with 577 litres and the plug-in model just 558). Raise the adjustable boot floor and there’s no load lip to lug bags over, either. The electric tailgate on the range-topping Ultimate model is also a useful addition.

Power comes from a 1.6-litre turbo petrol engine in all versions, with a choice of 148bhp or 178bhp mild hybrids, a 227bhp self-charging hybrid and a 261bhp plug-in hybrid. There is one non-hybrid model in the range, but without even the small torque boost of the mild-hybrid models, it’s a bit sluggish.

Nevertheless, the Tucson is an easygoing companion on the road. It’s smooth and quiet, and in 227bhp hybrid guise, gets up to speed quite effortlessly. The electric motor means there’s a pleasingly instant response from a standstill, and overtaking response is equally impressive. The six-speed automatic gearchange in this car is somewhat less polished, feeling a bit sluggish in its responses. Mild hybrid models get a crisper seven-speed twin-clutch DCT automatic gearbox instead.

Despite being quite tall, it doesn’t lean too much in corners, but the light steering and that automatic gearbox makes it more suited to relaxed cruising. It’s also quite a comfortable car to ride in, although the 19-inch alloy wheels of Ultimate-spec models mean it can jostle you around a bit over rougher road surfaces.

Inside the car you’ll find two 10.25-inch screens, one of which acts as a digital instrument cluster and the other a central touchscreen infotainment system. The main touchscreen is lag-free and fairly intuitive, but the shortcut buttons and heating controls below it are also touch-sensitive rather than physical buttons, which can be tricky to operate on the move.

If you’re used to the interior quality that you’d get in an Audi or BMW, you may feel a little short-changed, but the quality is on a par with a Peugeot 3008 or Volkswagen Tiguan. However, given the goodies you’ll get to play with, you probably won’t worry about a bit of overly shiny leather. Even the entry-level SE Connect gets a leather-wrapped steering wheel, DAB, Apple CarPlay and Android Auto, satnav, dual-zone climate control and cruise control. Higher-end models add in a panoramic sunroof, adaptive cruise control and wireless phone charging. 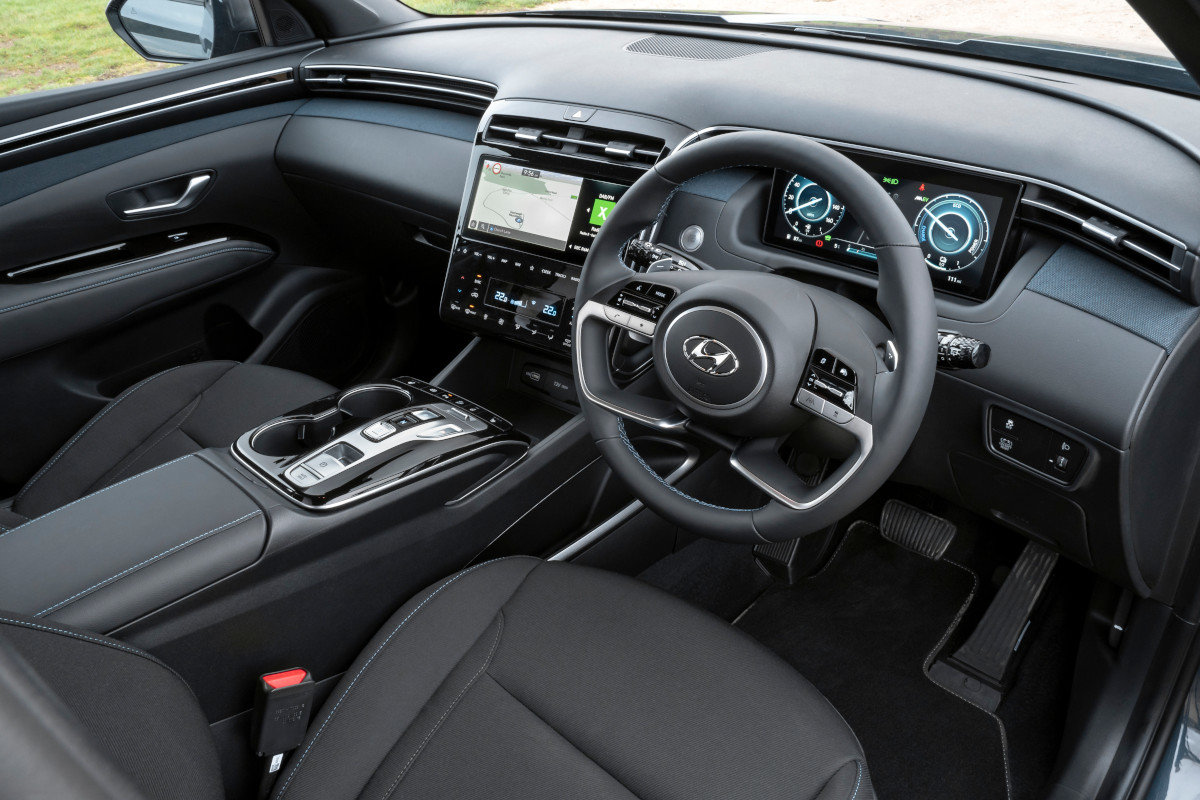 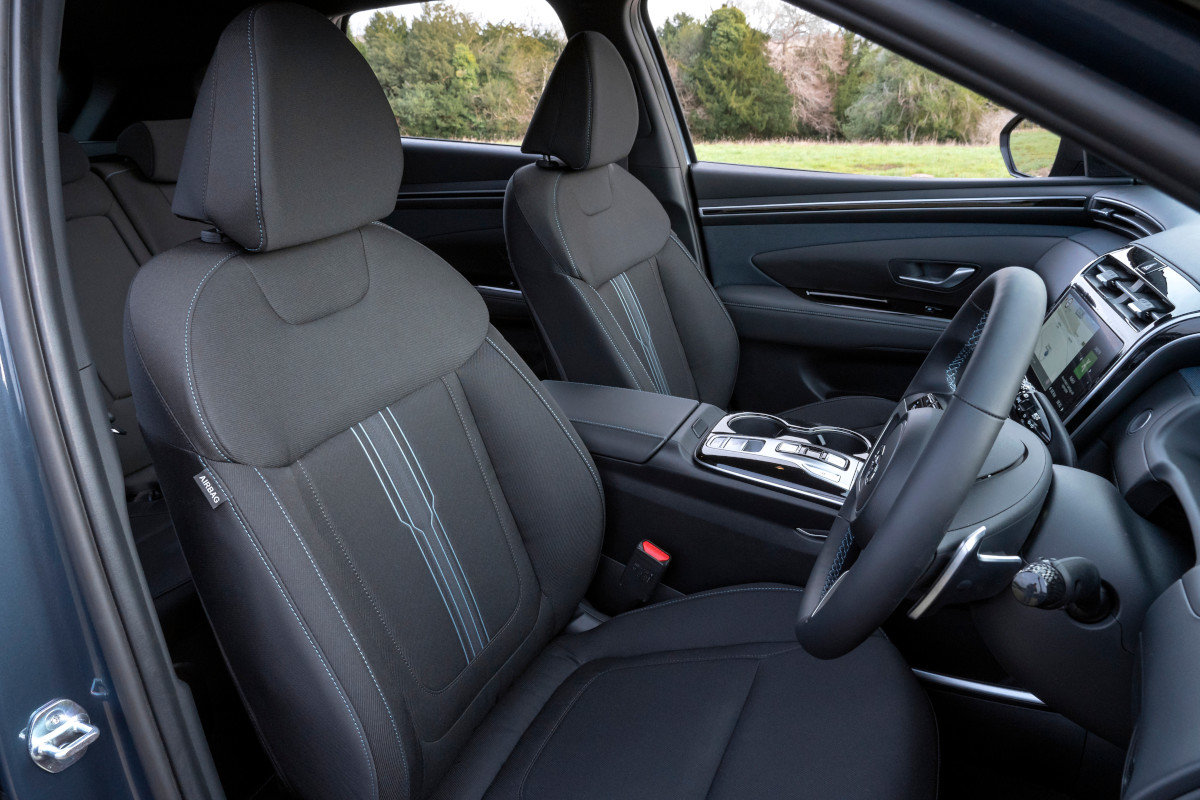 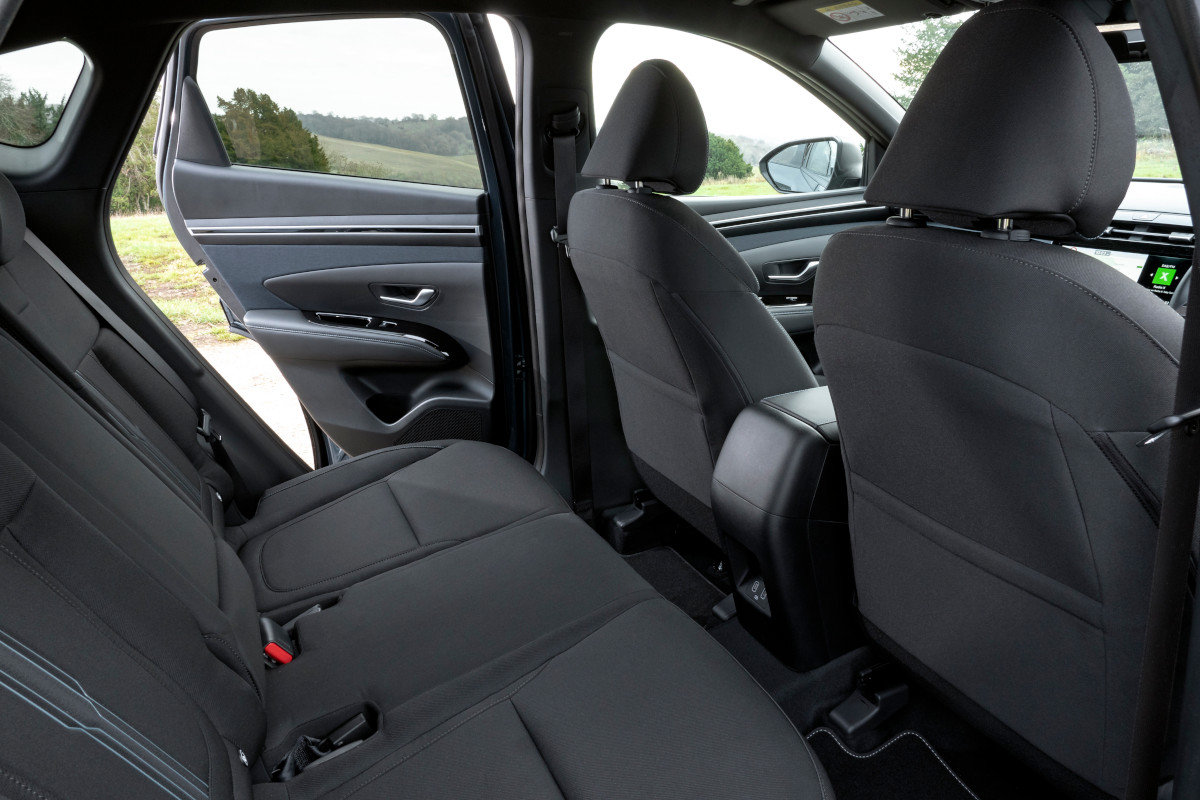 Ironically, the cheapest Tucson – the non-Hybrid model – is the most thirsty. Official combined fuel consumption figures put it at 41.5mpg and 151g/km of CO2 emissions. That puts it on a par with similar entry-level models from rival manufacturers, such as the Volkswagen Tiguan Life.

Mild-hybrid Tucsons with the dual-clutch seven-speed transmission and 148bhp can manage 43.5mpg and 144g/km of CO2. The 178bhp mild-hybrid gets four-wheel drive as opposed to the front-wheel drive of the 148bhp model, and the extra weight and friction of the four-wheel-drive system hurts the Tucson’s MPG a little; it can only manage a combined fuel economy figure of 39.8mpg with CO2 emissions of 160 g/km in this guise.

At the time of writing (mid-2021), Hyundai has yet to release official economy and emissions figures for the plug-in hybrid model, but it’s likely that this will officially be the most economical of all Tucsons. That will depend on how you drive the car, though, as plug-in hybrids suit short trips best, so you can maximise the effect of the electric motor. For longer journeys, the most economical Tucson will be the 227bhp plug-in hybrid model, which can achieve more than 50mpg and delivers CO2 emissions of 130 g/km.

Servicing intervals are annually or every 10,000 miles and, though you can set up a pre-paid service plan when you buy the car, the costs will vary depending on your usage. VED costs range from free for the plug-in hybrid to a chunky £545 for the non-hybrid model. 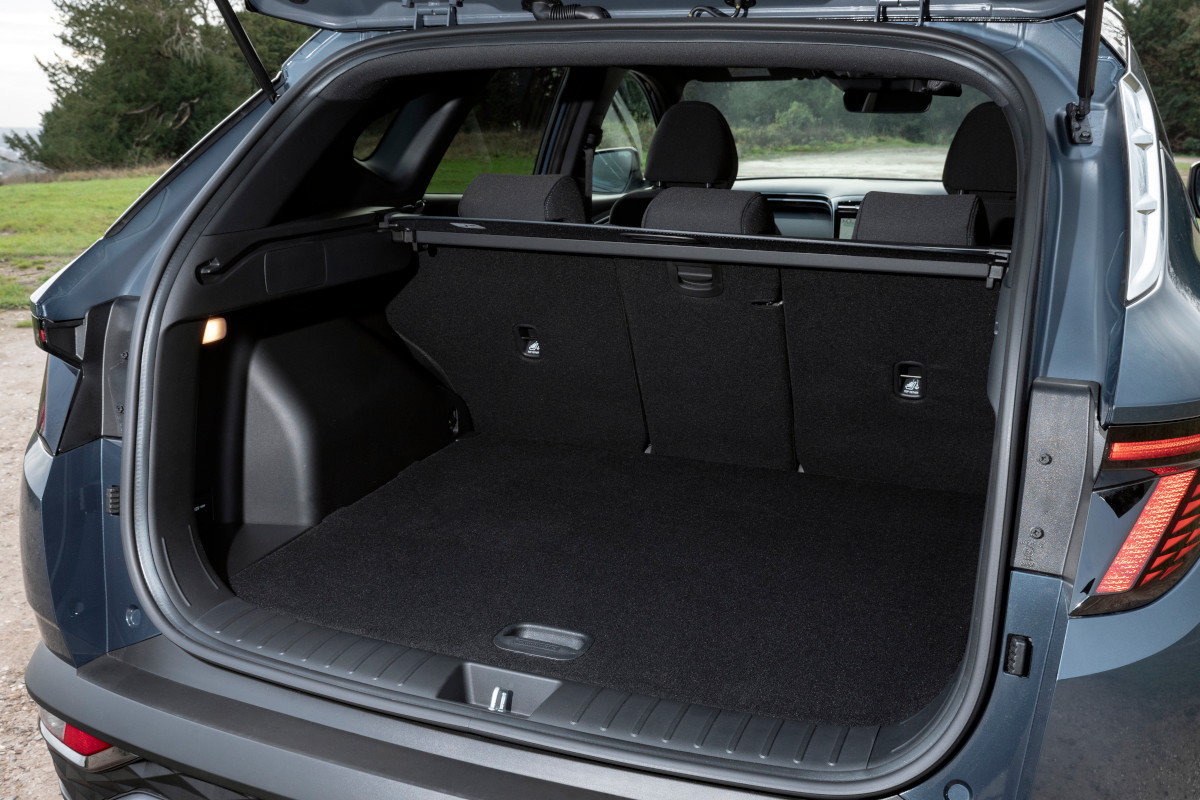 At the time of writing, the all-new Tucson had only just gone on sale, so it's too early to identify any particular issues with this model. But previous evidence suggests you're unlikely to have major issues, as the brand has an enviable reputation.

Hyundai offers an impressive warranty, which covers you for five years and for unlimited mileage. It also offers a battery warranty of eight years for its electrified models. That’s bettered only by the seven-year warranty you get with cars from Hyundai’s sister brand Kia. Toyota also offers a five-year warranty, but that’s limited to 100,000 miles. 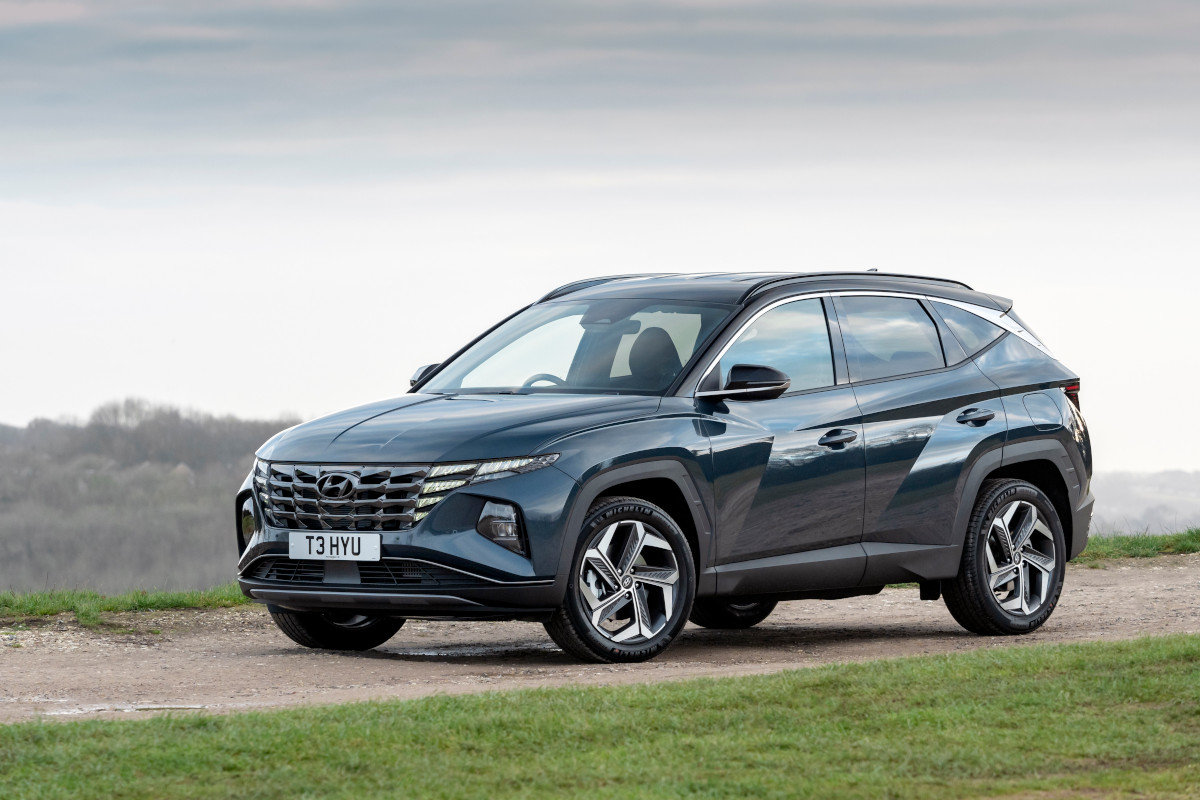 There’s no doubt that the latest new Tucson is a deeply impressive family SUV. It looks and feels well built – if not up there with an Audi Q3 or BMW X1, then certainly a big step up from the previous model – and it offers pretty good value for money considering the amount of standard equipment Hyundai crams into most trim levels.

It’s also filled to the brim with the latest active safety technology and the hybrid technology provides just the blend of relaxed performance and generous fuel economy that used to be the preserve of diesels in this sort of SUV.

No, it won’t especially put a smile on your face on a country road, the transmission can feel a little ponderous on occasion, and on big 19-inch wheels it can jostle you a little over bumpy surfaces, but the Tucson is an easygoing companion whether you’re on a long journey or a short hop.

Styling is a subjective matter, of course, and the Tucson’s looks could well be a little divisive. But if the design appeals to you, and a Volkswagen Tiguan or Mazda CX-5 is on your shopping list, then a Tucson makes a compelling case for itself as a viable alternative.

Search for a Hyundai Tucson on CarGurus