The Cheapest Cars to Insure in 2022

Getting a good deal on car insurance can be a real minefield, especially for young drivers, as there are so many factors involved in how insurance premiums are calculated. The driver’s age, occupation, location and driving record all play a part, but one of the best ways to reduce the cost is to buy a car with a low insurance group. Car insurance groups run from group one (the cheapest, for small city cars) to group 50 (the most expensive, for high performance cars) and are calculated by the insurance industry depending on a variety of factors such as repair costs, parts prices, standard safety equipment and security equipment. Fitting a telematics unit – also known as a black box – to monitor how you drive can also reduce your car insurance quotes.

Here's our pick of the best new cars with low insurance groups to keep your motoring costs down. 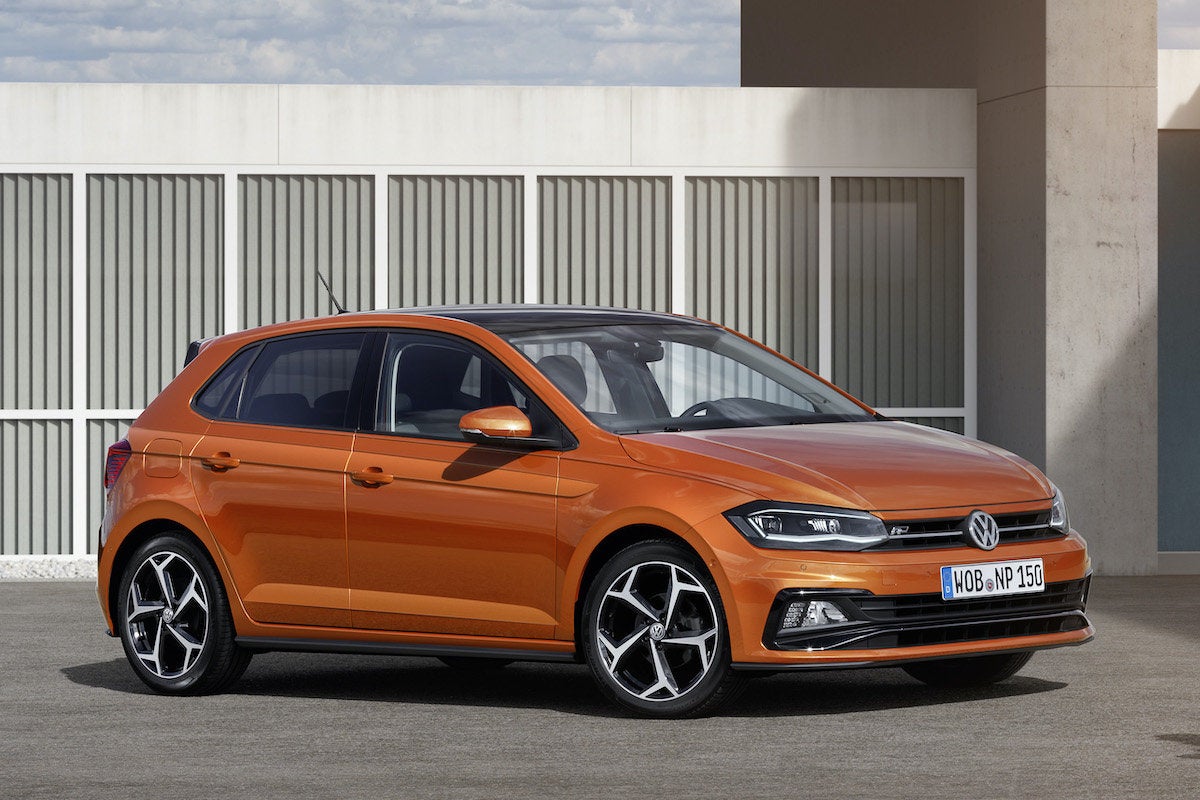 Volkswagen has managed to keep its lower-powered Polo models in group one for the very cheapest insurance. It’s an impressive feat and while you will have to settle for the 1.0-litre engine with just 79bhp, you can specify Match, Beats or United trim levels, so you shouldn’t feel too short-changed.
The rest of the Polo range sits between group eight and group 12, so it will have to be the 1.0-litre engine, known as the Evo, if you want the lowest insurance prices. If you accept you won’t be travelling very fast, it's a superb car on many levels, with a spacious interior and one of the largest boots in the supermini class. Fixtures and fittings are top quality and the controls have that solid feel you'd expect from a Volkswagen. It’s a refined cruiser, too, and while it’s not as much fun to drive as a Ford Fiesta, it’s surefooted and pleasant enough. The five-star Euro NCAP rating means it’s a safe choice, too, especially for new drivers.
Read our expert review of the Volkswagen Polo
Search for a Volkswagen Polo on CarGurus 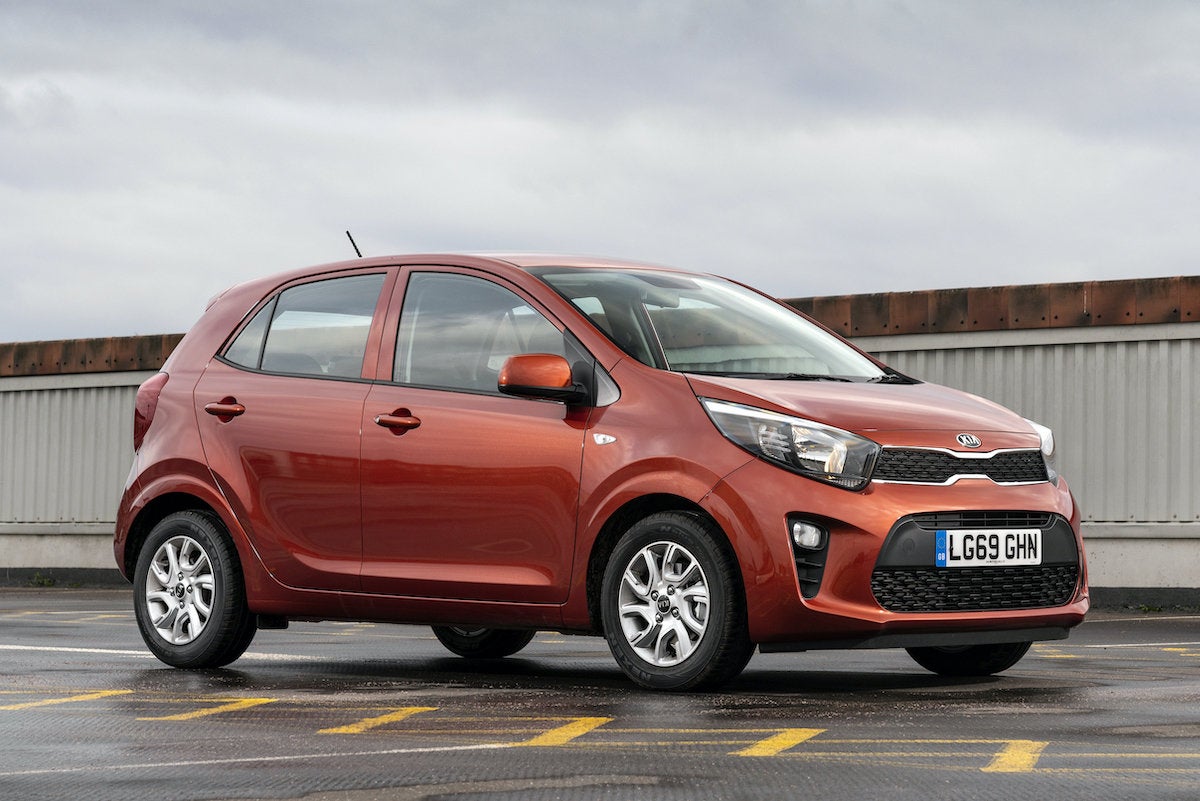 The Kia Picanto is a good example of the sometimes mysterious ways in which insurance groups work. You would think that the smallest 66bhp engine, with the entry-level 1 trim level, would be in insurance group one – but it’s actually in group five. However, the same car with the same engine, an automatic gearbox and a higher 2 trim level is in insurance group one. Go figure.
We’d advise against the 1 trim level anyway, as it’s a little lacking, but 2 adds items such as alloy wheels, air conditioning and electric windows. The automatic gearbox is slightly less economical than the manual and the engine is no ball of fire, as 0-62mph takes a leisurely 16.6 seconds. But for nipping around town, the Kia Picanto in this specification is a fine choice, with light controls and decent handling. The ride can be a little bouncy around town, but it's still a good choice if cheap insurance is your main requirement.
Many older Picantos with similar engines and trim levels were also in insurance group one, so they can be very cheap used buys on every level and, if you need more space, the Picanto's bigger brother, the Kia Rio, is well worth a look. It has the same easygoing driving experience as the Picanto, and certain models are also in insurance group one.
Read our expert review of the Kia Picanto
Search for a Kia Picanto on CarGurus 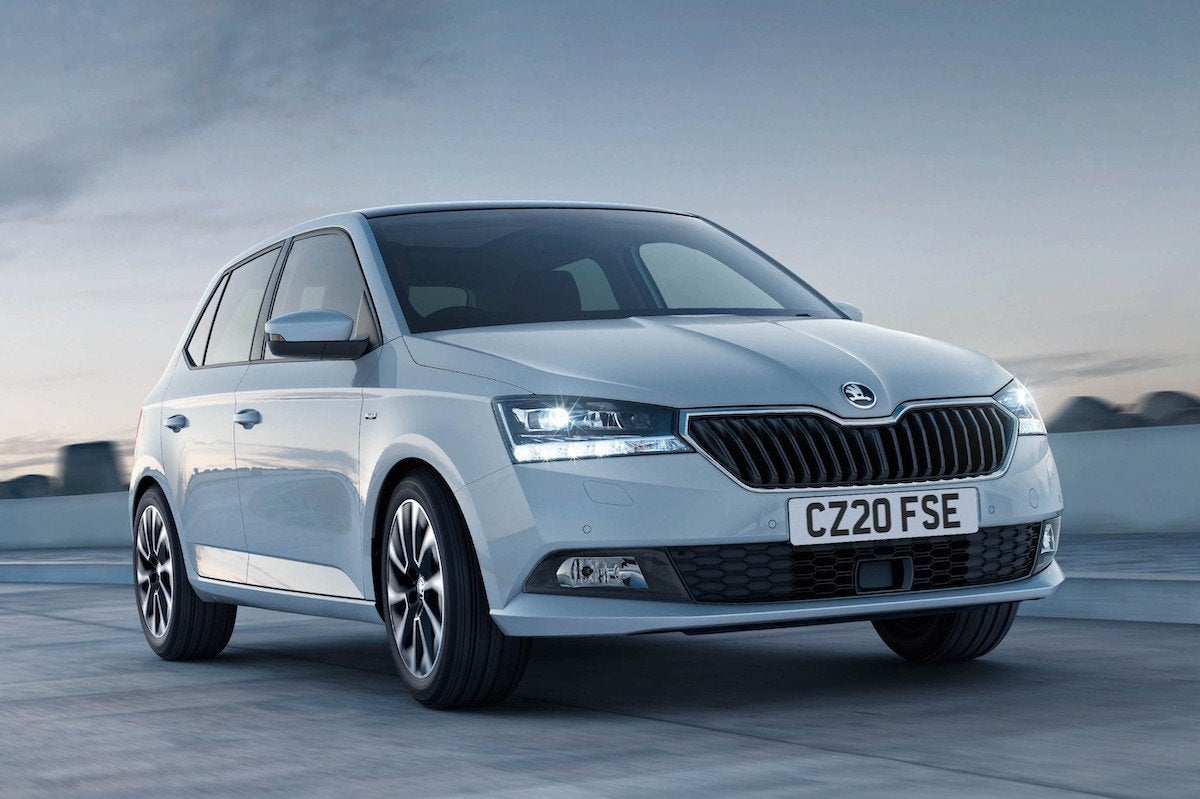 The Skoda Fabia might not strike you as the most desirable of small cars – it looks a little dowdy compared to its fellow Volkswagen Group rivals such the Volkswagen Polo and the Seat Ibiza – but it’s hugely competent in most departments and has the added bonus of group one insurance. You will have to choose the entry-level engine, a 1.0-litre petrol with a paltry 59bhp, and it’ll have to be the hatchback, as the estate version isn’t available with the lowliest engine option.
The SE model has plenty of equipment though, including air-conditioning, front- and rear parking sensors, alloy wheels and a 6.5-inch touchscreen infotainment system and the Fabia's strongest suit is its versatility. It’s a very roomy car with ample leg- and head room front and back, and a surprisingly big boot. It’s pleasant to drive, too. Granted, with a 16.2-second 0-62mph time, progress will be on the leisurely side, but you’ll certainly be comfortable while pottering along, as it absorbs bumps and ruts very effectively. It’s safe, reliable and an eminently sensible buy.
Read our expert review of the Skoda Fabia
Search for a Skoda Fabia on CarGurus 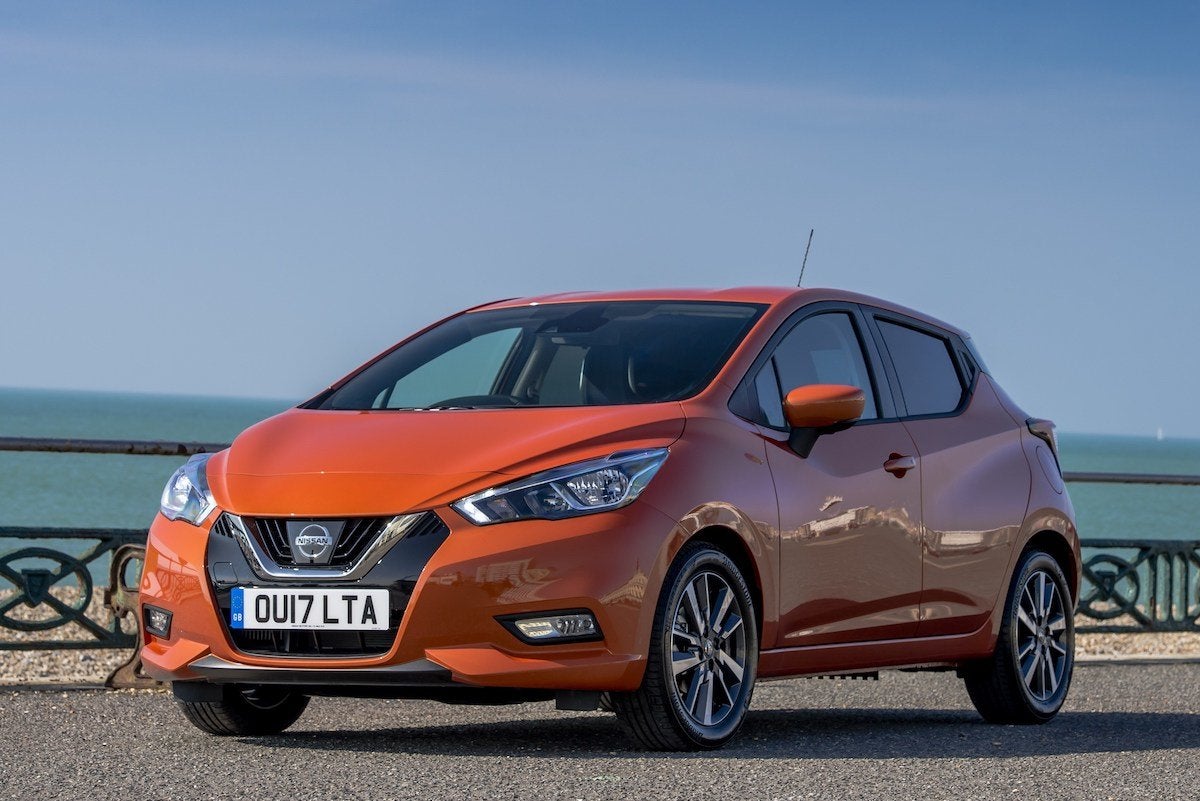 Previous generations of the Nissan Micra were nothing to write home about, but that changed when the fifth generation debuted in 2017. The styling is sharp and modern, it has a larger-than-average boot, an excellent safety rating (it scored a full five stars in Euro NCAP's crash test) and decent equipment levels.
No model in the current line-up sits in insurance group one, but 2017-2019 Micras fitted with the 70bhp 1.0-litre petrol engine do. It’s not the most exciting engine and can struggle a little, especially when fully loaded, but if it’s cheap insurance you’re after then it certainly ticks the right boxes. It was available in Visia, Visia+ and Acenta trim levels, and we’d recommend looking out for an Acenta model, which has plenty of standard equipment including climate control, a touchscreen system and Apple CarPlay and Android Auto. If you're happy with the slightly lacklustre engine, then it’s a good option for affordable insurance.
Read our expert review of the Nissan Micra
Search for a Nissan Micra on CarGurus 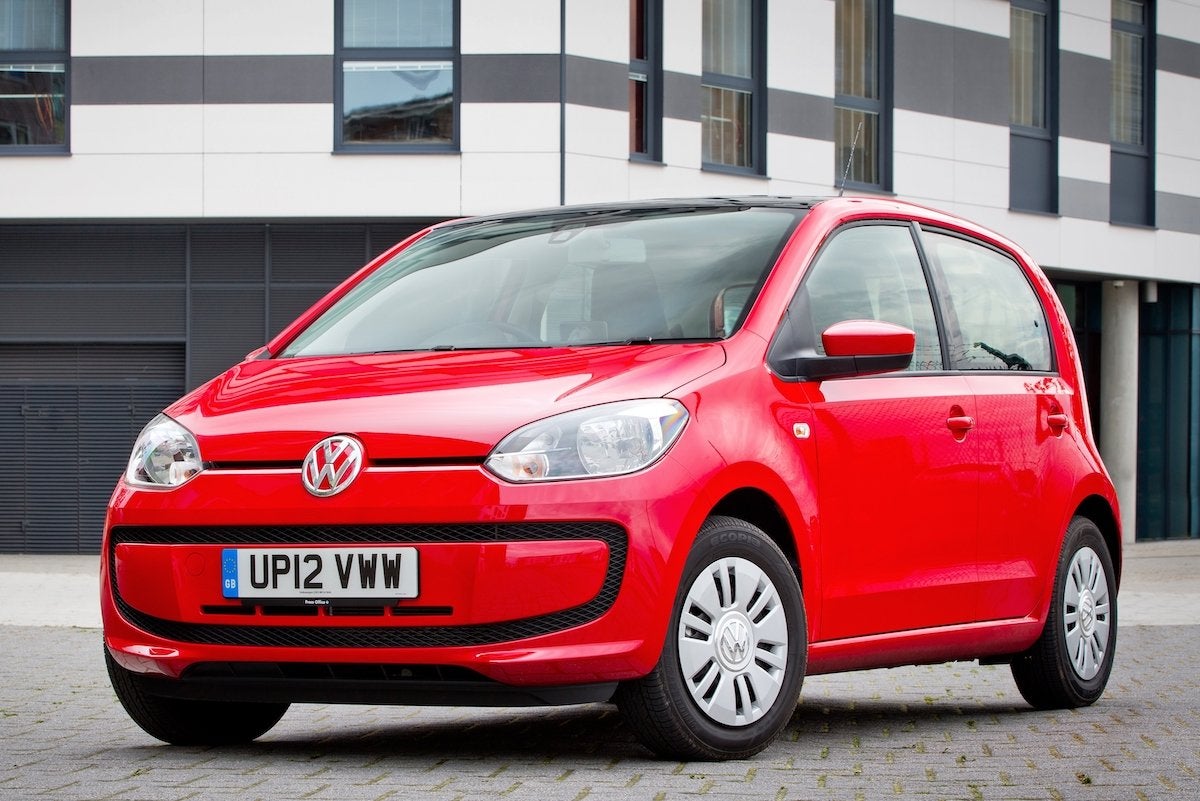 Those strange anomalies in the world of insurance groups are yet again demonstrated by the Volkswagen Up. Given that the larger, more expensive and more powerful Volkswagen Polo falls into insurance group one, it seems odd that the smaller, cheaper and less powerful VW Up’s lowest insurance rating is group two (which will still make for pretty cheap premiums).
However, that only applies to the newest versions of the VW Up. Earlier models originally fell into group one, specifically those with the 59bhp 1.0-litre three-cylinder engine. You’ll have a choice of trim levels, too, with the original Take Up, Move Up and High Up trim levels fitted with this engine all available in group one. While 59bhp might not sound like much power, in a car as small and light as the Up it’s still enough for pottering around town.
The Up's small footprint and nimble nature also make it a great city car, and it's genuinely fun to drive. It also has more luggage capacity than most of its direct rivals, and can comfortably seat four adults.
Read our expert review of the Volkswagen Up
Search for a Volkswagen Up on CarGurus 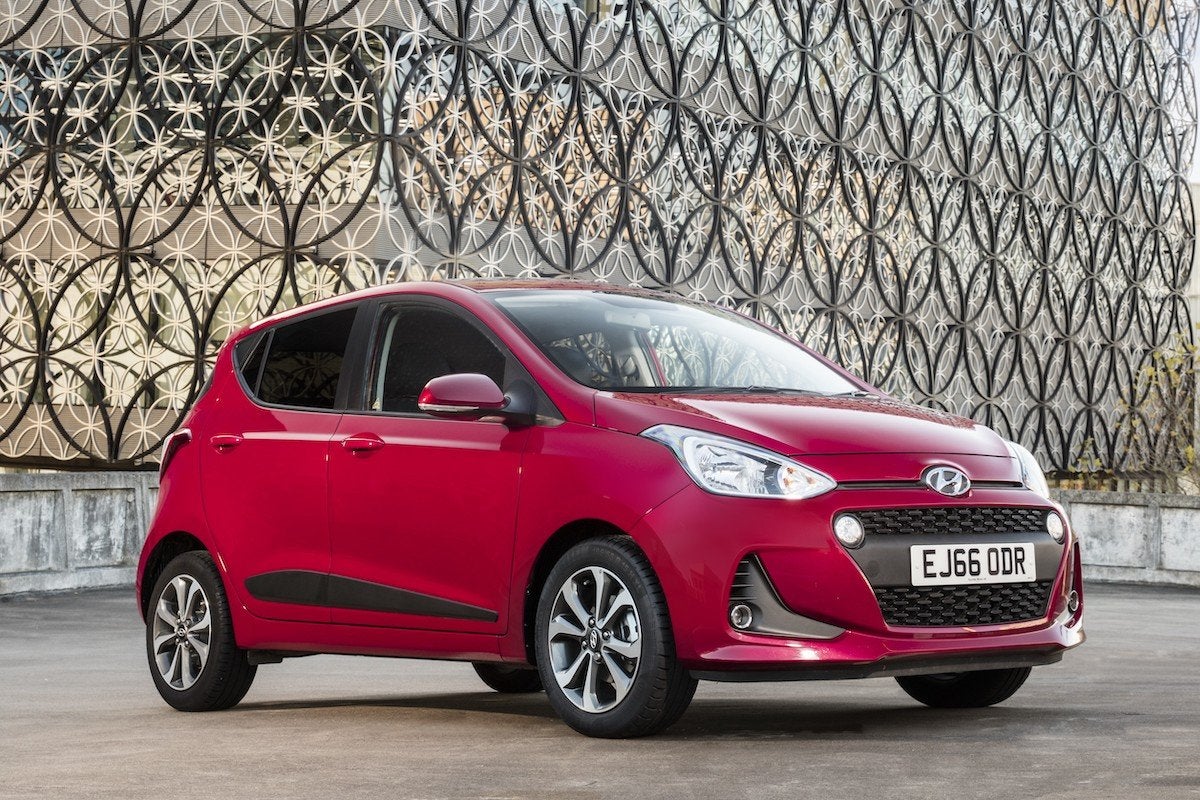 The current Hyundai i10 is one of our favourite city cars, and offers the sort of sophistication that you expect from a car in the class above. Sadly, no current i10 falls into insurance group one, but the previous generation, built from 2014 to 2019 had some group one models.
You’ll need to look for the 1.0-litre engine that was available with various different trim levels, and we think the posh Premium model us the best buy. Later examples will also benefit from the remainder of Hyundai’s excellent five-year warranty. Sometimes older models can fall short of expectations, but this shouldn’t be the case with the i10. After all, it was crowned our Best Used City Car in the 2019 CarGurus Used Car Awards.
It’s practical, roomy (it has five seats as standard, which isn’t always the case with city cars) and has a decent sized boot. It also rides well, so it's a comfortable companion around town.
Read our expert review of the Hyundai i10
Search for a Hyundai i10 on CarGurus 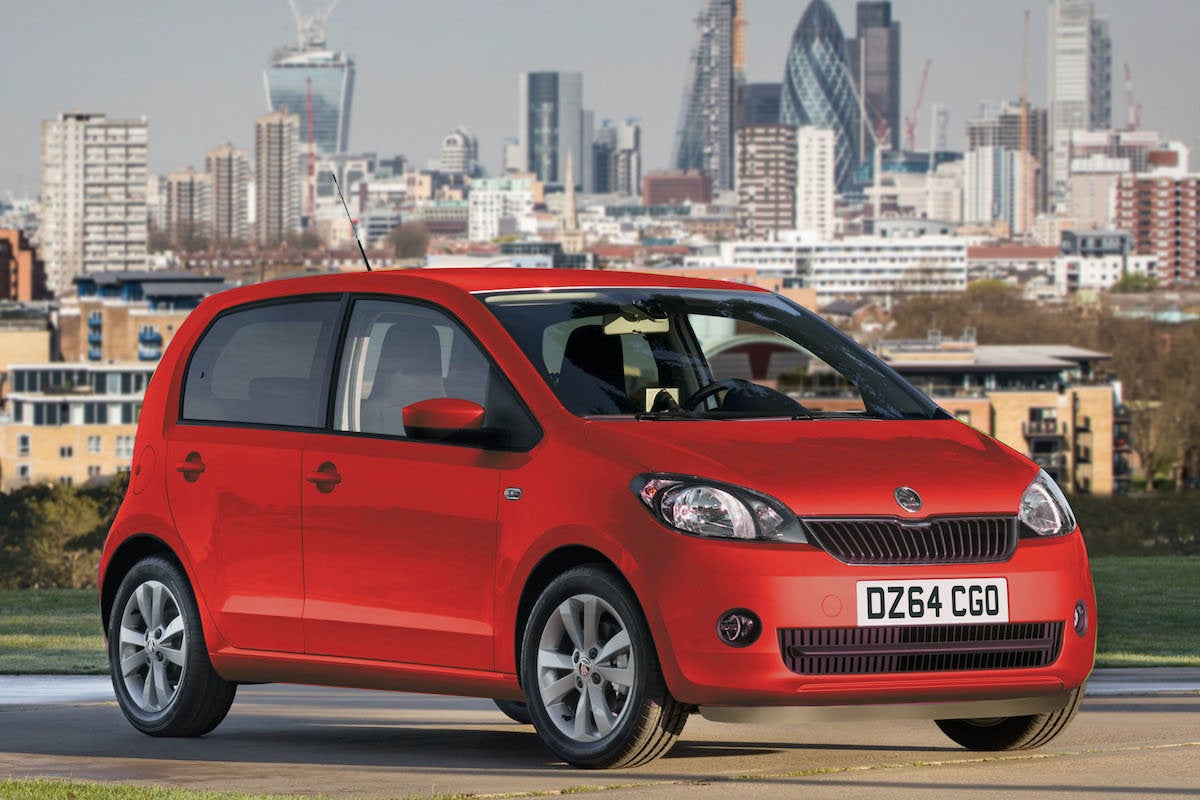 The Skoda Citigo is closely related to the VW Up and the Seat Mii, and in its least powerful configuration, the Citigo was available in insurance group one. You’ll need to look for a model with the 59bhp 1.0-litre three-cylinder MPI engine, but you will have the choice of three- or five-door models, and S, SE and Sport trim levels. We’d advise against the S trim level as it was really quite spartan, with wind-up windows and no air-conditioning.
Check that the car you’re looking at falls into group one, as later versions moved up to insurance group two. Overall, though, the Skoda Citigo is a practical and fun car to own and drive, and while you only get four seats, your passengers should be able to get comfortable. It’s efficient, too, with good fuel economy, and while safety tests have become tougher over the years, the Citigo scored the full five starts in Euro NCAP crash tests when it was new.
Read our expert review of the Skoda Citigo
Search for a Skoda Citigo on CarGurus 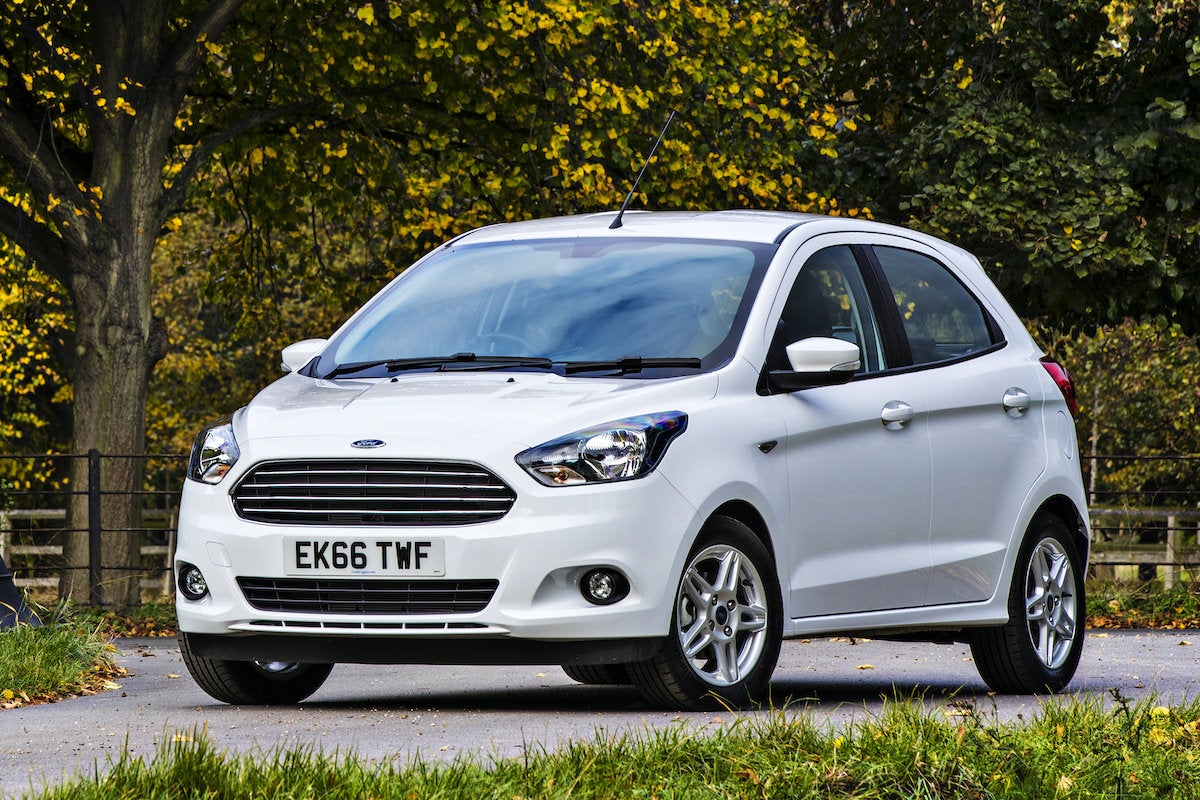 Ford’s Ka+ was a relatively short-lived model in the UK; it debuted in 2016 and was withdrawn in 2020 after slow sales. It was based on the Fiesta supermini but had a smaller city car body, and while it could have done well for Ford, there were slightly too many compromises in its design that made it less attractive than other cars in its class.
The 68bhp version of 1.2-litre engine fell into insurance group one, but unlike the EcoBoost engines in the Fiesta range, the Ka+’s unit is rather lacklustre. UK versions had tweaked suspension to give them that fun Ford characteristic, but the interior felt cheap and a three-star rating from Euro NCAP doesn’t really cut the mustard these days when so many competitors score the full five. It ticks the box for low insurance costs, but there are better choices on the used market.
Read our expert review of the Ford Ka+
Search for a Ford Ka+ on CarGurus 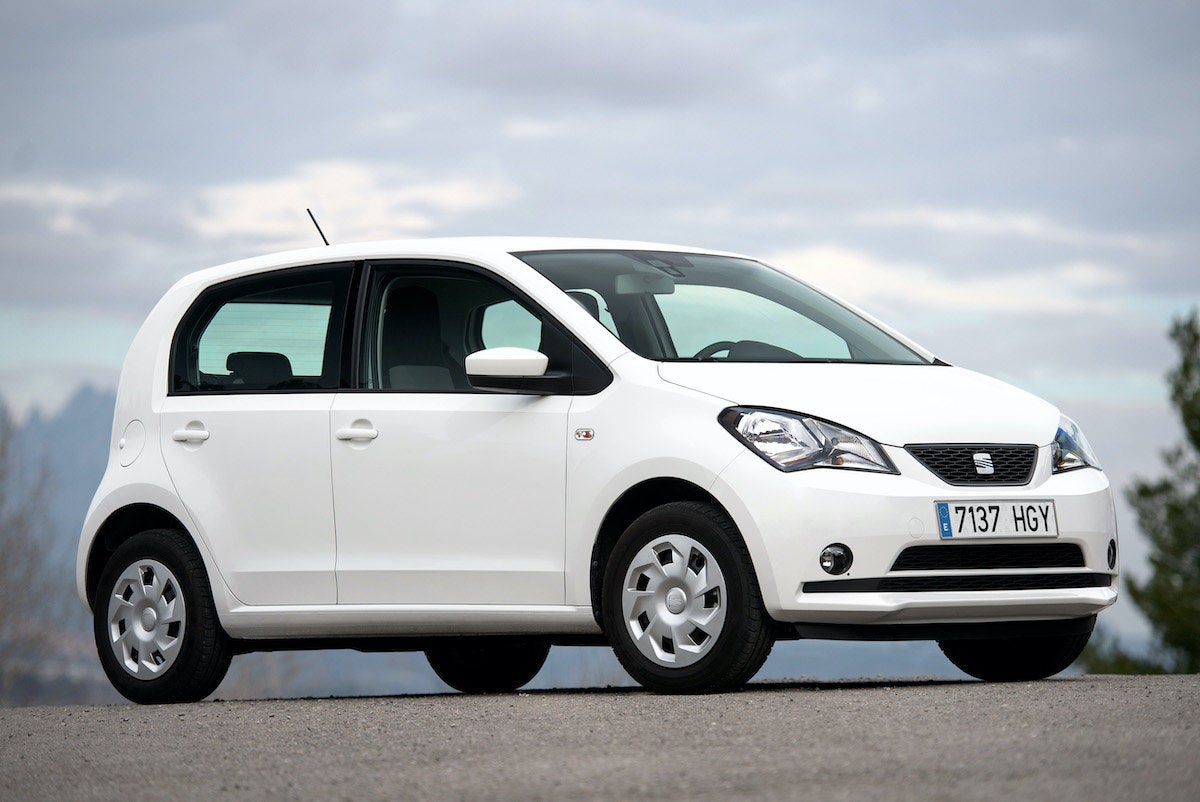 The Seat Mii is third of the VW/Skoda/Seat triumvirate available with group one insurance and, like its siblings you’ll have to buy an older model to achieve lowest insurance costs. Petrol and diesel versions of the Seat Mii were discontinued in 2019 – it’s now purely an electric model – but if you search for the lower-powered 59bhp 1.0-litre engine in S, Ecomotive or SE specifications, you’ll be buying one of the best city cars with affordable insurance.
Like its close cousins – and its larger sibling, the Seat Ibiza – the Seat Mii gained a five-star crash rating from Euro NCAP when it was new, and it was one of the first cars to offer autonomous emergency braking as an option. As a used buy the Mii has a lot to offer: three- and five-door body styles, a practical seating arrangement and a very usable boot given the car's size. It's comfortable and fun to drive, and despite the lowly power output, it doesn’t feel out of its depth when you venture away from the city centre. It's an excellent a low-cost city car.
Read our expert review of the Seat Mii
Search for a Seat Mii on CarGurus 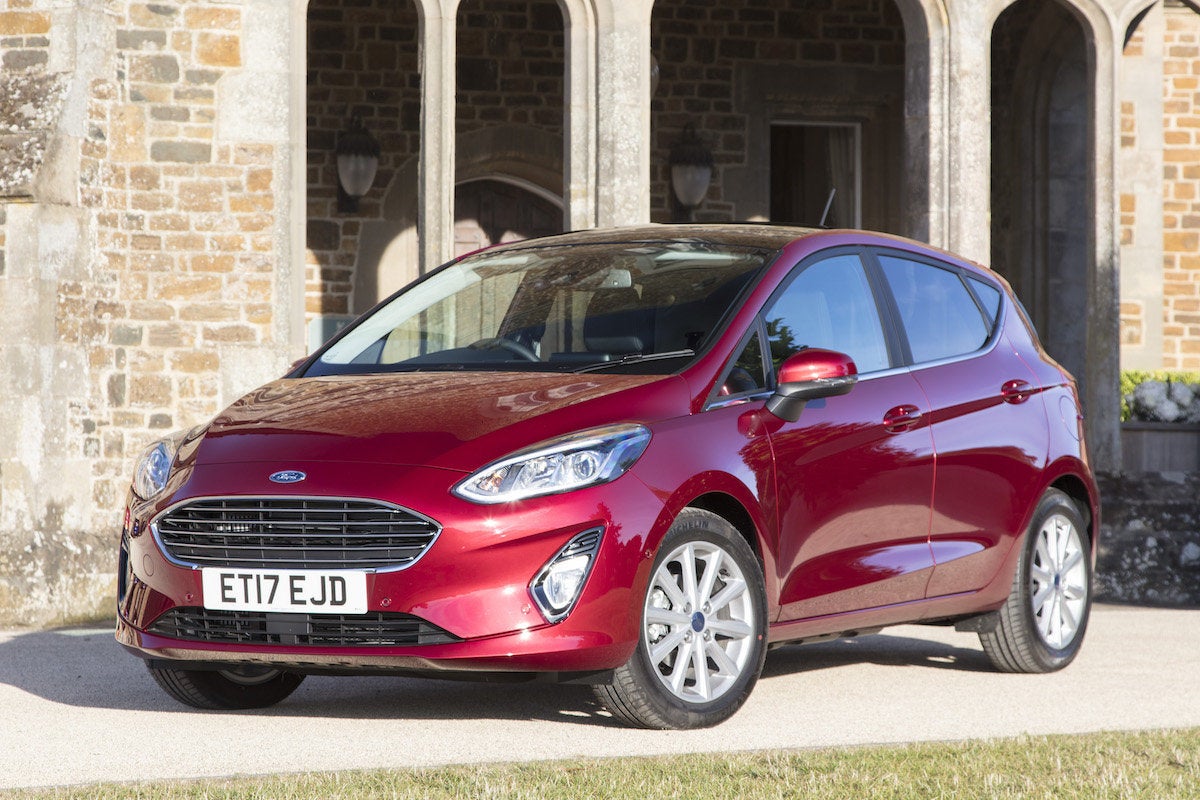 The Ford Fiesta is one of the best small cars on sale right now, offering a great blend of performance, space, equipment and, best of all, fun. It’s a genuinely entertaining car to drive, even in its lowest-powered guises. The current Fiesta line up doesn’t include any models in insurance group one, but seek out a 1.1-litre petrol model from the previous generation with the Style trim level, and you’ll be looking at insurance group two, which is a small price to pay for such an entertaining car.
The 1.1-litre engine is a little slow, but the Fiesta more than makes up for that with its entertaining chassis. It has an excellent blend of talents that make it a very well-rounded machine and it’s just a great car to drive and own.
Read our expert review of the Ford Fiesta
Search for a Ford Fiesta on CarGurus

by Bob Harper
The content above is for informational purposes only and should be independently verified. Please see our Terms of Use for more details.