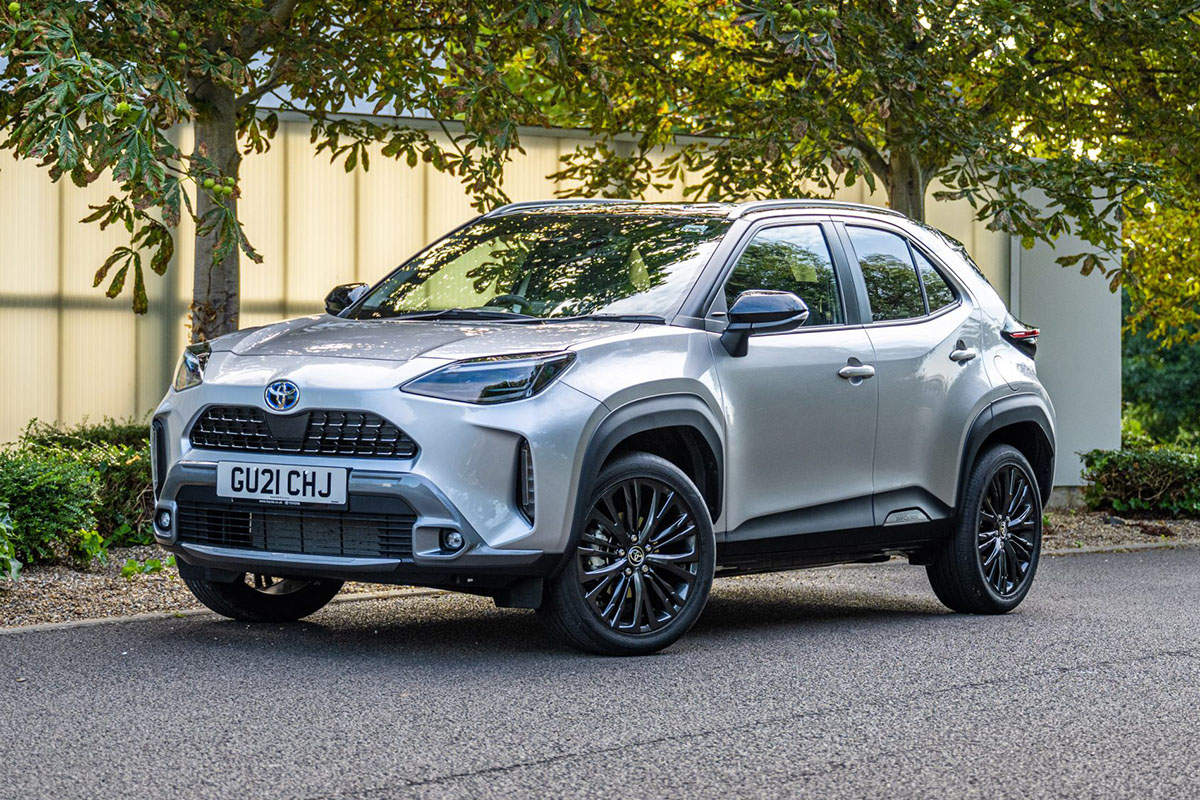 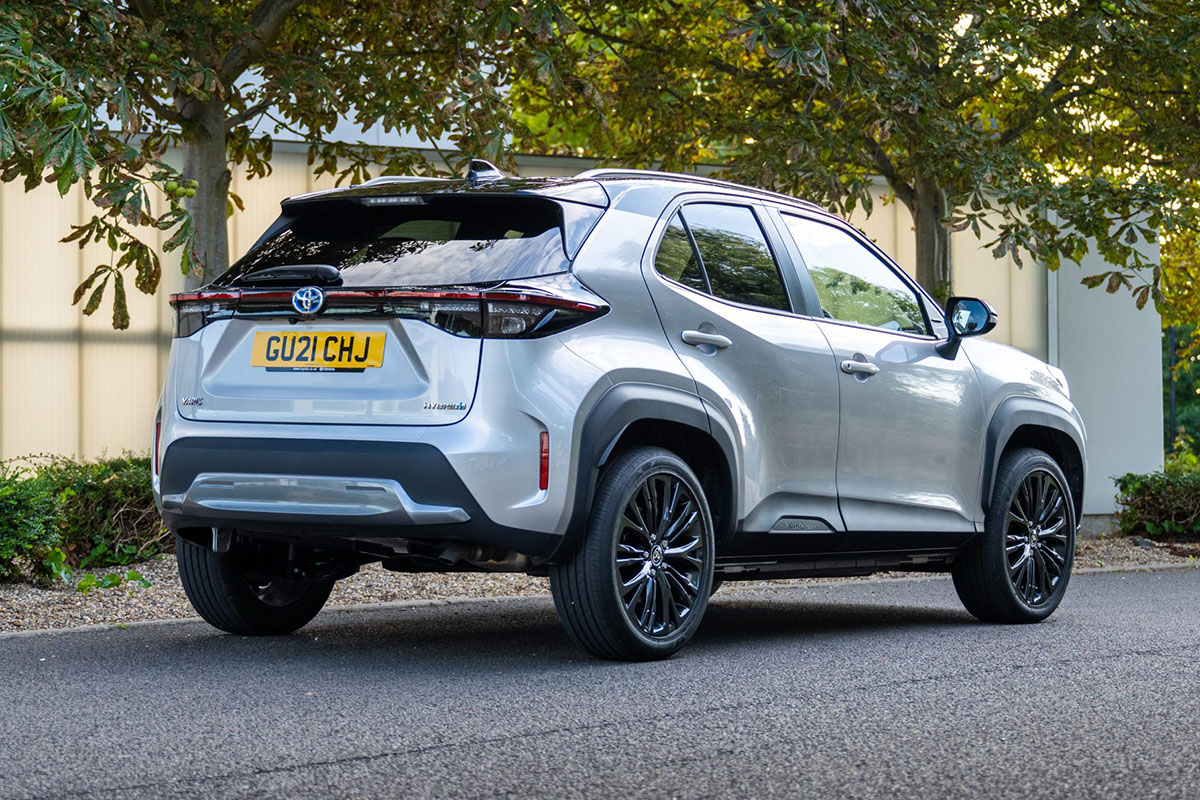 So you want a Toyota Yaris, but you want it to be just a little bit taller? Good news: this is the Yaris Cross, and to all intents and purposes, it is exactly that. Inside, it’s almost identical, and the way it drives is very similar, too. But the Yaris Cross’s extra height means more space, a better view from the cabin, and easier access, all of which offset its slightly higher buying and running costs. 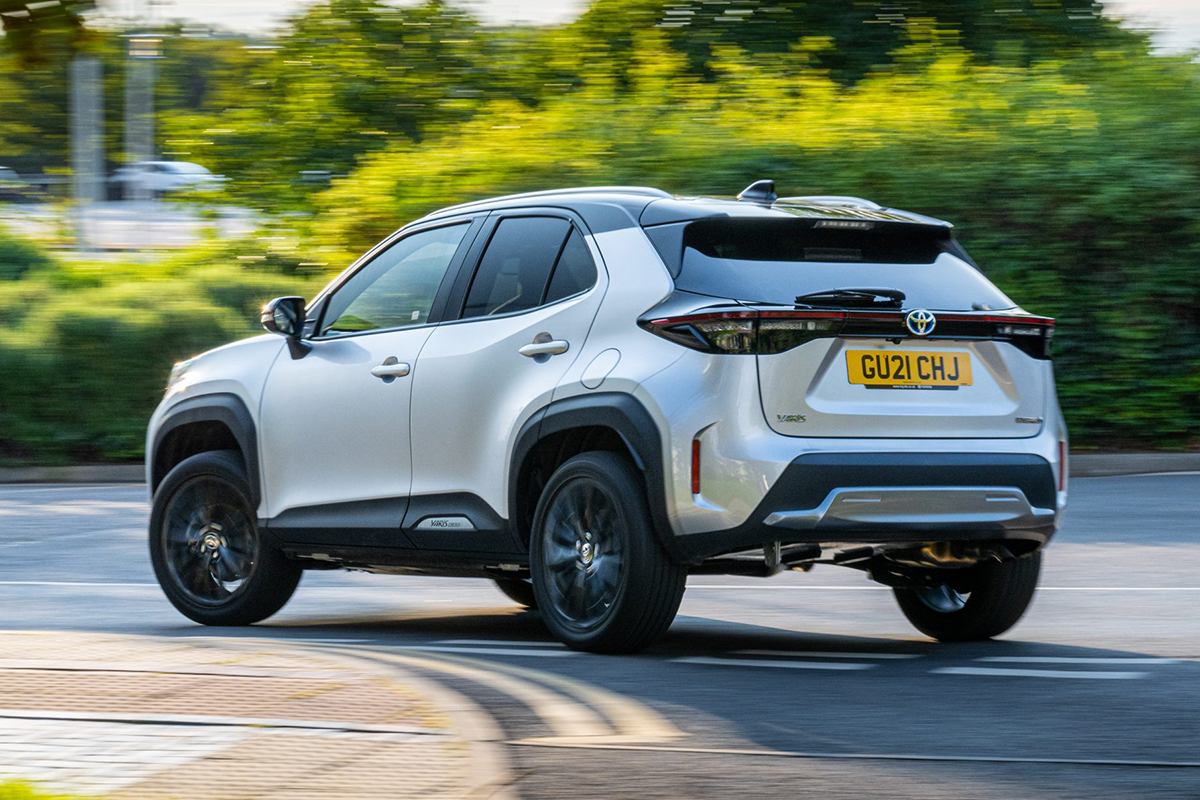 What is the Toyota Yaris Cross?

They’re spreading like wildfire, these small SUVs. Barely a week goes by when another doesn’t arrive on the market, and it's no wonder. They combine the town-friendly footprint of a small hatchback with enough interior space for a young family, as well as a tall seating position that makes it easy to see out, and to climb in.

The Toyota Yaris Cross is no different. As its name suggests (Cross signifies not that it’s particularly angry, but that it’s a crossover) this is a jacked-up version of the ever-popular Yaris hatchback, and that means it’s the latest entrant into this hotly contested part of the market. It therefore goes up against not only our current pick of the bunch – the Ford Puma – but also popular rivals such as the Peugeot 2008, the Nissan Juke and the Renault Captur.

Next to the competition, the Yaris Cross certainly looks the part, with chunky, fresh styling, and inside it’s no different. The interior is very similar if not identical to the Yaris hatchback’s, and that means it’s built from high-quality plastics and well screwed together, if a little dour. The infotainment system, meanwhile, works well enough, but isn't quite as good as the best.

Back seat space could be more generous, but there is more room than you'll find in the rear of a Peugeot 2008. Toyota has managed to cram in a very respectable 397 litres of boot space, which isn’t quite as much as you’ll find in a Ford Puma, but not far off a Renault Captur, and the Captur needs its sliding rear seat to be in the forward-most position - minimising rear-seat legroom - in order to achieve this.

There are no such sliding seats in the Yaris Cross, but the rear seats fold down individually on all but the entry-level model. More expensive Yaris Crosses gain a rather smart false floor in the boot, which can be set at the height of the boot lip to make it easier to slide in heavier items (and in this position, it sits flush with the rear seat backs when they’re folded down).

Unusually, this boot floor is actually split in two along the same line as the rear seats, which means you can choose to have one side in the higher position and one in the lower position, which is useful if you want to carry one or two taller items as well as some longer ones.

To drive, the Yaris Cross once again feels much like the Yaris. You get the same slightly firm ride quality; it’s comfortable enough, but you might wince occasionally as the wheels crash into deeper, harsher potholes. And you get the same precise and direct - if slightly remote - steering.

That said, there is a little bit more body lean to contend with, which should come as no surprise, really, given the Yaris Cross’s extra height. So while it’s pleasant enough to tool around in, don’t expect it to be as engaging as a Ford Puma.

There are four different models to choose from in the Yaris Cross range. Even the entry-level Icon is well equipped, mind you, with adaptive cruise control, a reversing camera and an eight-inch touchscreen with Apple Carplay and Android Auto all coming as standard. Upgrade to the Design, and you get bigger alloy wheels, 40/20/40 split-fold rear seats, LED lights all round and ambient lighting inside.

From there, you can opt either for the Dynamic model, with black design accents and a beefier bodykit, or the Excel, with front- and rear parking sensors, a heated steering wheel and a powered boot lid. Both of these top models get heated front seats, a larger touchscreen, dual-zone climate control and that clever split adjustable boot floor. 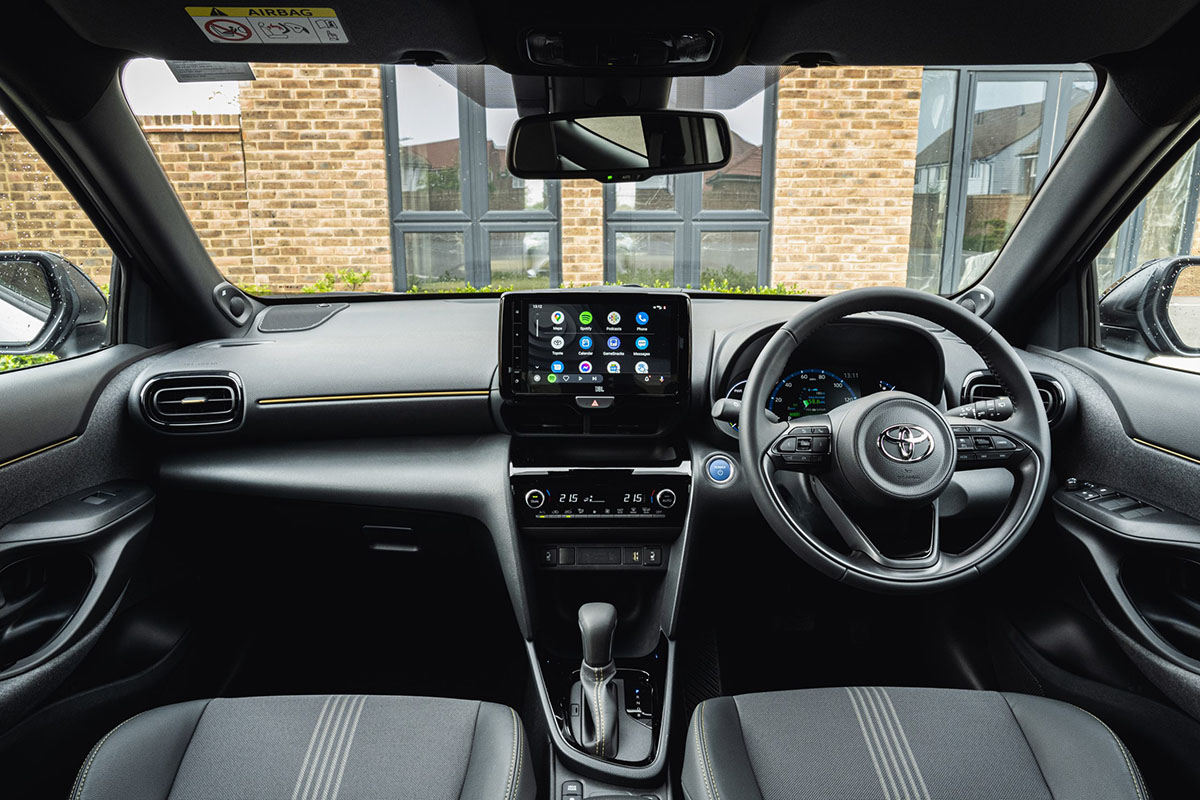 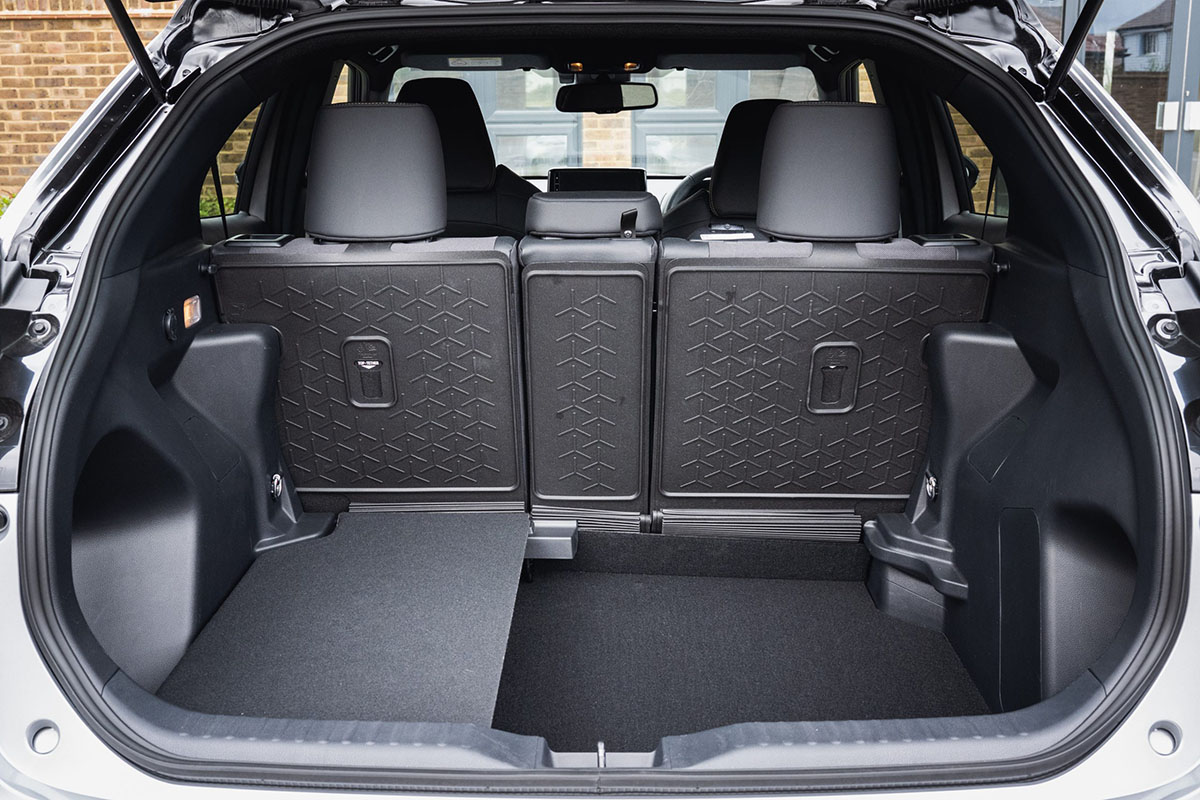 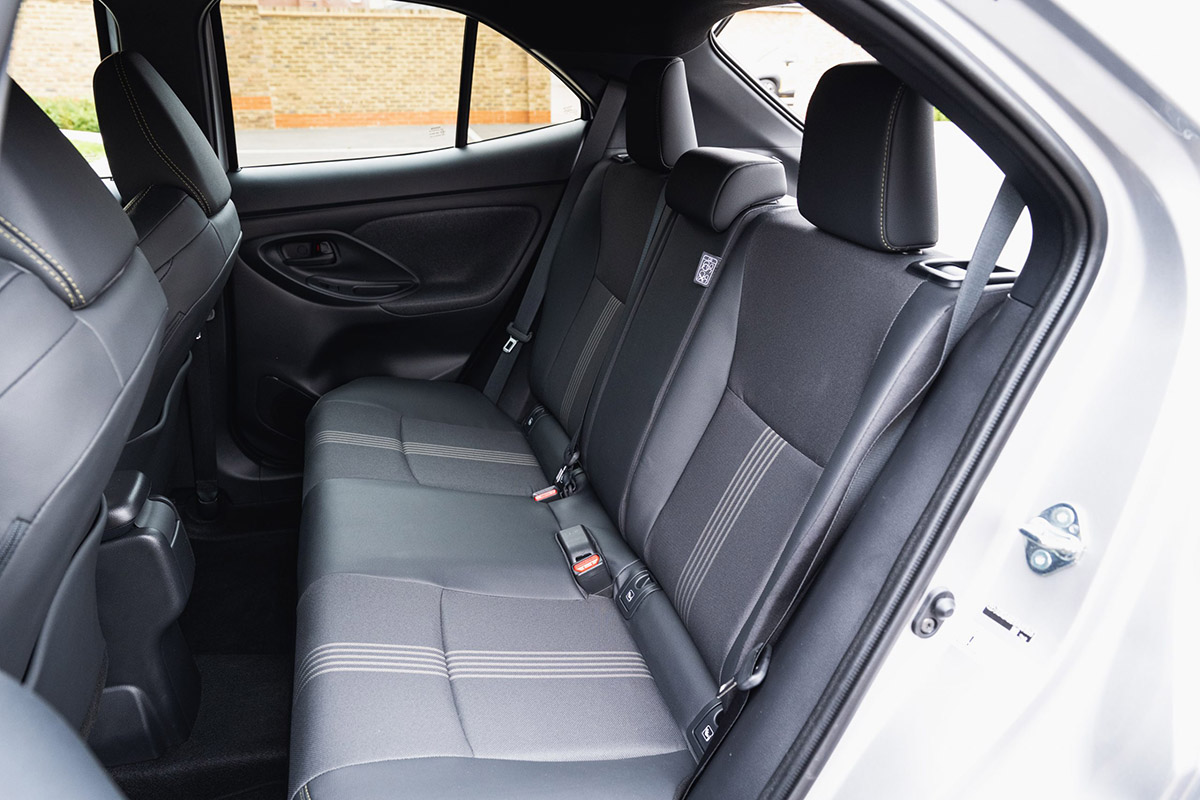 Depending on your driving style, you should see somewhere between 55 and 60 mpg in everyday use from the Yaris Cross. Your final figure will depend on whether you drive mostly in town or on the motorway, because urban driving benefits hybrid systems like this, as it allows for lots of regenerative braking, which in turn means the battery is charged regularly and the electric motor can help out more.

The all-wheel drive model will be a touch less efficient, as that battery has to feed two electric motors rather than just one, but there’s less of a weight penalty than with conventional four-wheel-drive systems, so fuel economy shouldn’t drop too much: 50-55mpg should be easily achievable.

Servicing costs are reasonable at Toyota dealers, too, being slightly pricier than those of Ford or Vauxhall dealers, but lower than you’ll find at upmarket brands such as BMW and Mercedes. One word of caution, though: if you’re planning to have your Yaris Cross serviced at an independent garage, some might be less well versed in its hybrid technology than others, so you might want to shop around.

One thing you won’t have to factor in, however, is the cost of a timing belt change. That’s because the Yaris Cross’s engine uses a metal timing chain that should last the lifetime of the car, instead of a rubber belt that requires changing at great cost every few years. 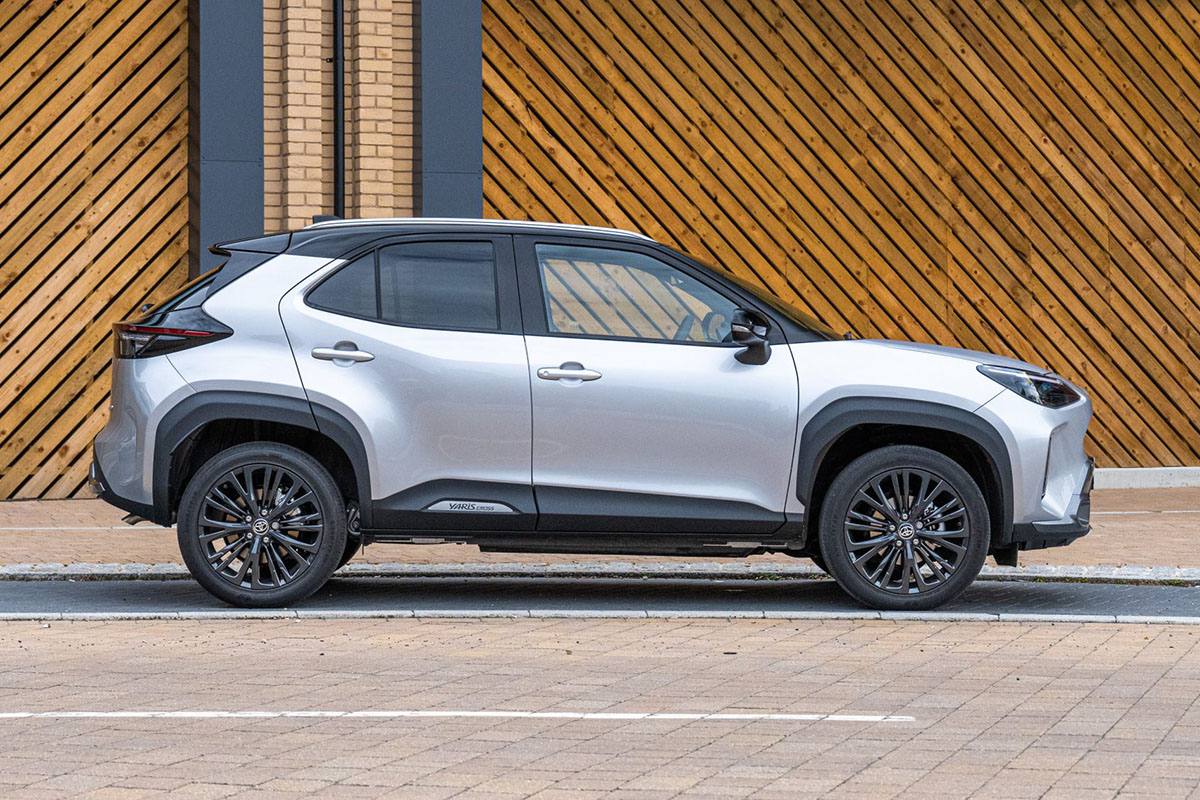 Unfortunately, we can’t give you precise reliability information about the Yaris Cross because it’s simply too new, and the same goes for the Yaris on which it’s based, so that isn’t much help, either.

That said, we don’t imagine you’ll have too much to worry about, because Toyota has one of the best reputations for reliability of any car manufacturer. The previous generation of Yaris was the most reliable hybrid car in the latest What Car? Reliability Survey, and Toyota finished equal fifth out of the 31 manufacturers included in the same survey.

What’s more, Toyota recently upgraded its warranty offer, and the Yaris Cross now comes with a maximum of 10 years and 100,000 miles of cover, on the condition that you keep the car serviced at Toyota dealerships. That’s the longest warranty available on the UK new car market.

There’s only one thing to keep in mind, and it isn’t so much a reliability issue than a security one. Like all hybrids, the Yaris Cross will be a prime target for catalytic converter theft, a crime that’s become more prevalent in recent years. With that in mind, it’s not a bad idea to research ways of protecting your car’s catalytic converter against thieves – our guide is a good place to start. 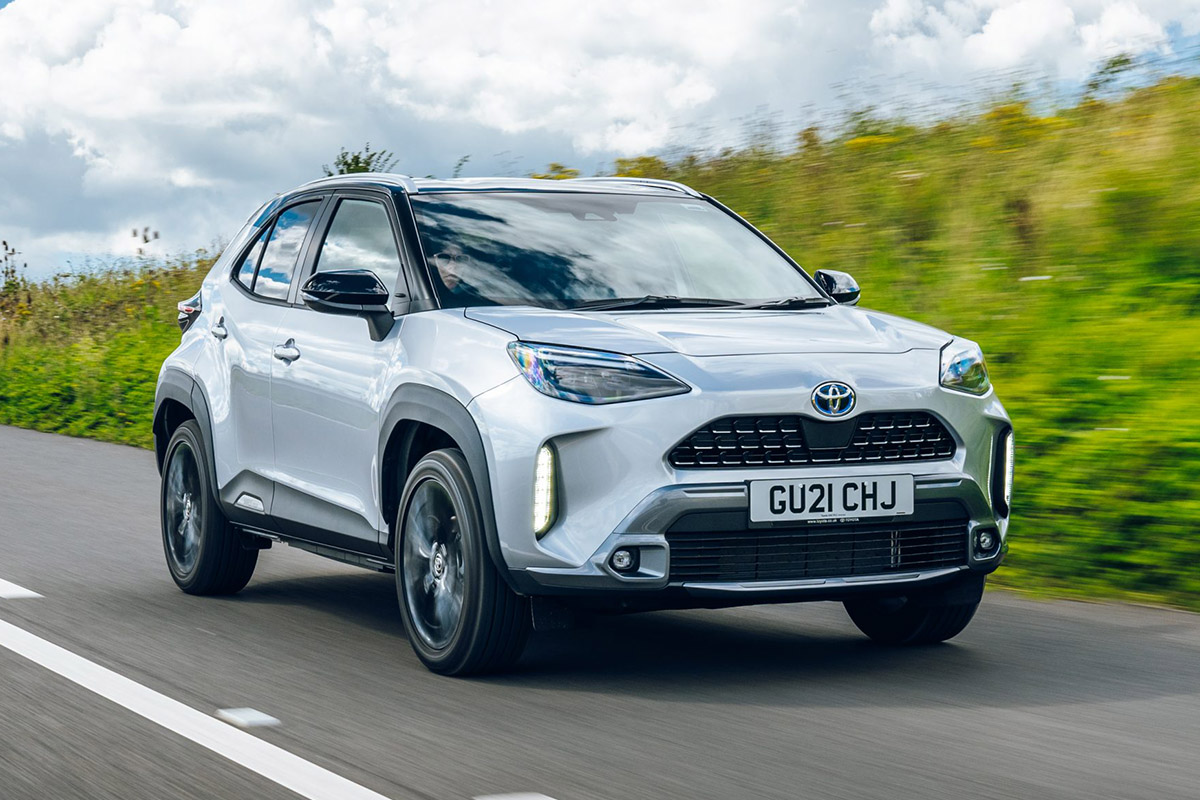 If the idea of a compact SUV appeals to you, and reliability is key, then it's hard to beat the Toyota Yaris Cross. If, however, driving involvement, versatility or ride comfort are important priorities, then it doesn’t fare quite as well as some of the other options in this burgeoning part of the market.

Having said that, the Yaris Cross is good enough in all of these areas that it doesn’t embarrass itself. While it isn’t the cheapest thing in the world to buy, it is very cost-effective to run, and that long warranty provides a welcome dose of peace of mind.

This, then, might not be an outstanding all-rounder, but it’s still a good one. And if it’s a tall, small car you’re after, the Yaris Cross should probably be on your list.

Search for a Toyota Yaris Cross on CarGurus